Pars Japonica: The First Dutch Expedition to Reach the Shores of Japan 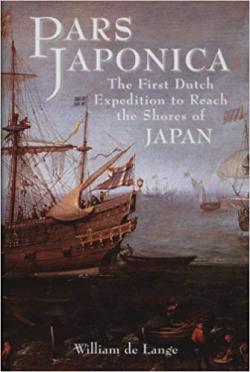 The long subtitle to this book reads: ‘How a seafaring raid on the coast of South America met with disaster and how, against all odds, one ship was eventually brought to the shores of Japan by the English pilot Will Adams, the hero of Shogun.’ William de Lange, through his careful research into Dutch, English, Japanese and German sources, has produced a book, which gives a new perspective to the arrival of William Adams in Japan in 1600. A good deal has been written about Adams and his contributions to the development of trade relations with Japan and his relationship with Tokugawa Ieyasu, but comparatively little has appeared about the voyage of the Dutch fleet of five ships, of which the Liefde (Love) with Adams as the pilot was one. This interesting book thus fills a gap

The story begins in 1597 with a request to ‘the States of Holland and the States General’ for permission for a fleet to the East Indies to bring spices and other goods back to Holland. From the outset, however, it is clear that, while the development of trade was a primary motive, the fleet was equipped for fighting at sea and on land. The Dutch were at war with Spain and Portugal and the route, which the fleet proposed to take to the East Indies, via the straits of Magellan, would inevitably bring them into Spanish South American waters. The provisions for the voyage were limited to allow for significant armaments and troops to enable the fleet to carry out raids on Spanish ships and territory and commandeer provisions from Spanish occupied territory. The five ships which ironically all had biblical names (Faith, Fidelity, Gospel, Hope and Love) behaved as pirates once they had passed through the Straits of Magellan. They were not the first vessels to pass through the straits but there were hardly any reliable maps or charts of the area and the passage was a hazardous one.

The expedition sailed from the Maas in late June 1598. The crossing of the Atlantic was a difficult one and the ships crews soon began to suffer from scurvy and disease. More than one hundred men ‘had been lost, either in combat, through disease, or by law’ by the time the ships reached the straits of Magellan in April 1599. The crews were ill-equipped for the southern winter and they were short of food. The death toll climbed and skirmishes with the natives in southern Chile led to further casualties. They eventually got away from the straits in early September 1599, but in the storms, which they encountered, the ships were dispersed.

The expedition was a huge loss to its merchant backers and resulted in a large loss of life. The Faith was the only one of the five ships, which got back to Holland in July 1600 with a skeleton crew of thirty-six having lost two-thirds of its men on the voyage. The Fidelity after various skirmishes reached Ternate in the Spice Islands in December 1600 with a crew reduced from eighty-six to twenty-four. Only three of these managed to get back to the Netherlands after the crew had been tricked and then slaughtered by Portuguese and natives. The crew of the Gospel were captured by the Spanish and only nine managed eventually to get back to Holland. The Hope and the Love decided in November 1599 to make for Japan because the woollen cloth, which they had on board, was not suitable for the tropics. The two ships managed to keep together despite their depleted crews until the Hope was lost in a storm. The crew of the Love ‘had reached appalling depths’ by the time they reached the vicinity of Japan. Adams lamented ‘the misery we were in, having no more but nine or ten able men to go or creep upon their knees: our captain, and all the rest, looking every hour to die.’ The Love had eleven ‘great chests with coarse woollen cloths’ and ‘nineteen large bronze pieces of ordnance and other small ones, five hundred muskets, and five thousand balls of cast-iron, three hundred chain-shot’ as well as other armaments. The Japanese found all these weapons useful.

The book, in addition to recounting Adams’ meetings with Tokugawa Ieyasu and what happened to the ship, also explains what became of the Dutch members of the crew who survived the voyage.

The decision to go to Japan does not seem to have been made in the Netherlands in advance of the departure of the expedition, but to have been an ad hoc decision. If the skipper of the Love had not been in such a dire condition when the ship arrived off Japan, he rather than Adams would have been summoned to see Ieyasu and the ‘first Englishman in Japan’ might never have achieved his fame.