Rivals: How the Power Struggle Between China, India and Japan Will Shape Our Next Decade 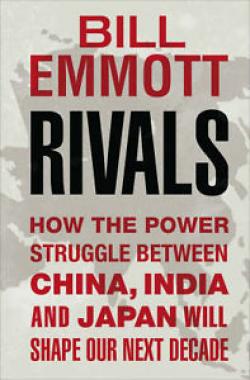 This new book by Bill Emmott, the former editor of The Economist and author of two books about modern Japan, has been widely reviewed in the press. In this review I propose to concentrate primarily on his comments about Japan, although Japan is only one of the three powers whose future Emmott discusses in this thought provoking book.

In chapter 1 “Asia’s New Power Game” and chapter 2 “A Continent Created,” he sets the scene, stressing that the future belongs to Asia. He notes that although the concept of Asia is meaningless to most Asians and that there are as yet few unifying regional institutions, Asia is becoming more like Europe in the way in which its economies are becoming increasingly integrated. Chapter 3 is devoted to China. In this he reminds readers that a major problem in considering the Chinese economy is the unreliability of Chinese statistics. He notes the view that communist rule in China is there to stay.

Chapter 4 contains his main discussion of modern Japan. In this he comments on the way in which the Japanese economy has developed since the war and he draws attention to the ironic comment by Lech Walesa, who led Poland’s solidarity movement and who visited Japan several times, that Japan was the only truly successful example of socialism that had ever existed.” He also repeats a joke he had heard in 2005 about Chinese students studying at a university in Tokyo: “The Chinese students are asked why they spend so much of their spare time with other Chinese rather than with the Japanese students.’Because we are afraid they might teach us communism,’ comes the answer. But, of course, as he points out Japan is not like communist China. It really is a free country.”

Emmott reminds his readers of the reasons for Chinese hostility towards Japan. These are not confined to the Nanking Incident where there can be no doubt that terrible things happened but where the numbers of the dead and injured may be open to question. Unit 731, where Japanese scientists and soldiers experimented on Chinese and other prisoners, was, he points out, “not an extermination factory like Auschwitz,” but it was a terrible example of the inhumanity and cruelty of some members of the Japanese imperial army. It is deeply regrettable that the Americans gave immunity from prosecution to those involved in return for handing over the results of their experiments. Rightly he has no sympathy for Japanese historical revisionists. He notes that “Concern about China is now a central feature of Japanese politics and policy. Since that concern is only likely to grow as China’s strength and reasonable interests grow too, more and more Japanese policy will be shaped by it.” He quotes the reply by Taro Aso, now Secretary General of the LDP, to a question about recurrent tensions between Japan and China: “China and Japan have hated each other for a thousand years…Why should things be any different now?”

After discussing the problems posed by an ageing and declining population Emmott concludes that “If the OECD’s forecast turns out to be accurate, Japan will have little chance of standing tall and strong alongside Asia’s new rising power, China. In that case the task in Japan would be one of managing the country’s relative decline, and of preventing China from exploiting that decline or America from becoming disenchanted with its main ally in the Pacific.”

Emmott notes the continuing existence of informal trade barriers in Japan and points out that Japan is not a very globalized country, but he is encouraged by signs, in the face of increased competitive pressure, of a “stealth revolution in corporate law, in politics, in its labour markets, in capital markets, in its banking system, in the role of the state, the effects of which will become clear only during the next decade or so.”

India is the other growing power in Asia and the world. The Japanese government and Japanese business showed little interest in India for decades after the war. Despite the fact that Buddhism was born in India, few Japanese felt any cultural affinity to the country which they tended to dismiss as over-populated, unclean and poor. It was not until the brief premiership of Yoshiro Mori in 2000-2001 that the first overtures were made to India. Now at last it seems that the significance of the growth of India has been recognized in Japan.

Emmott’s chapter on India is headed alliteratively and aptly “Multitudes, Muddle, Momentum.” In Chapter 6 “A Planet Pressurized” he discusses the huge problems of pollution and climate change which will continue to grow as India and China continue to expand. Chapter 8 “Flashpoints and Danger Zones” reminds readers of the many historical anomalies which continue to exist in Asia and which could lead to wars that might be difficult to contain.

In his last chapter “Asian Drama”, Emmott makes a number of sensible recommendations for action by governments, with many of which I agree. But I cannot endorse two of his recommendations. He suggests (page 267) that the Yasukuni shrine should be restored to public ownership so that the Yushukan museum at the shrine “can become a proper publicly controlled museum and so that the status of the ‘martyrs of Showa’, the war criminals, at the shrine, can be a matter of public debate and policy rather than under the control of the shrine authorities.” Any such steps would be hugely controversial and I fear that the process would be high-jacked by Japanese nationalists and would undermine the principle of separating the state from religion. He also suggests that a commission be set up to re-examine the status and basis of the Tokyo trial, the International Military Tribunal for the Far East. While I accept that there were many flaws in this trial nothing should in my view be done which might undermine the principle that crimes against humanity, wherever they take place and by whomsoever they may be committed, should be subject to international justice.

Bill Emmott’s book contains much food for thought and should be read widely by all who are interested in the future of the planet.