Japanese Shipping and Shipbuilding in the Twentieth Century, The Writings of Peter N. Davies 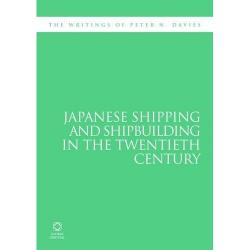 Peter N. Davies is emeritus Professor of Economic History at Liverpool University. He is an expert on the international shipping industry and maritime history and has written many studies on these subjects.  In 2008 his book The Business, Life and Letters of Frederick Cornes: Aspects of the Evolution of Commerce in Modern Japan was published by Global Oriental [read our review in JSR issue 19].  He had earlier contributed a portrait of ‘Frederick Cornes, 1837-1927, Founder and Senior Partner of Cornes and Company (1873-1911)’ to Britain and Japan: Biographical Portraits, Volume IV, published by Japan Library in 2002.

This book consists of a series of studies about Japanese shipping and shipbuilding. These are of interest to anyone specialising in Japanese economic history. It includes chapters on the rise of Japan’s modern shipping industry, the development of Japanese shipping industries in post-war Japan, Japan’s merchant marine and Japanese shipbuilding. The articles here reproduced were, Peter Davies explains, intended for a readership primarily interested in maritime affairs with little or no knowledge of Japanese history or of Japanese economic development. They were also written over a long period of time. As a result the author admits that that there is some repetition in the articles. This may be the case but the articles will be valuable to the economic historian.

With the development of Korea as a significant shipbuilding country and the huge development of bulk carriers and container ships the dominance of Japan in shipbuilding, which was so noteworthy in the 1970s, has diminished, but Japan remains a very important maritime nation.

British shipbuilders (management and unions) found it difficult to compete with Japanese shipbuilders. As commercial counsellor in the British Embassy in Tokyo in the latter part of the 1960s I recall trying to explain to missions from both sides of the industry that Japanese competition was not unfair. Japanese workers were not on low wages. There was much in Japanese methods of working and quality control which we should emulate. The message was unpalatable and shipbuilding in Britain has sadly continued to decline.

Japanese membership of the shipping conferences was important and British shipping firms recognized in Ariyoshi Yoshiya of NYK, about whom I wrote a biographical portrait in Britain and Japan Biographical Portraits Volume III, a world leader in the cartels which in those years dominated world shipping.