The Woodsman and the Rain 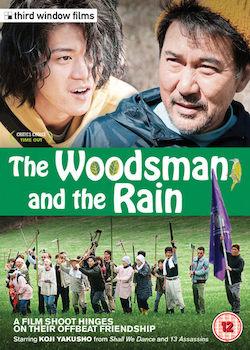 Directed and written by Shuichi Okita (沖田修一)
2012, 129 minutes
currently out on release on DVD from Third Window Films

This review may contain spoilers

Shuichi Okita was also the director and screenplay writer for the 2009 hit Antarctic Chef based on the autobiographical novels of Jun Nishimura. In Okita’s films there are no profound statements or overly dramatic scenes; we are just shown real life with more than a small dose of humour. In Antarctic Chef the simple act of cooking and the happiness that small pleasures give, are emphasised against the unusual background of a team of scientists based in the Antarctic. In The Woodsman and the Rain [キツツキと雨] the interaction of a film crew and the inhabitants of a small village are shown through the eyes of a widowed lumberjack and a young director.

The core of the movie hinges around the relationship between the two main characters, the woodsman Katsuhiko Kishi, played by Koji Yakusho [役所広司], and the movie director Koichi Tanabe, played by Shun Oguri [小栗旬]. Koji Yakusho plays his character perfectly and really anchors the movie. Katsuhiko is a recently widowed logger with a son (played by Kengo Kora -高良健吾) living a life which is quite unconnected to others. He just lives day to day and gets on with his job. Koichi is a new director working on a movie based on a script he has written. However, he lacks confidence in both himself and in the story that he needs to shoot. Although it is not at first apparent, the two actually have a lot in common and gradually develop a deep friendship over the course of the film.

The movie opens with Katsuhiko alone in the woods cutting down a tree, when a member of the film crew runs up the hillside to ask him to stop. It is a very amusing moment; a socially inept man from the countryside trying to get on with his job, perplexed by a demand to keep quiet from a Tokyo man who has appeared as if from nowhere. It is a good representation for many other moments in the movie contrasting the behaviour of film crew and actors with that of the villagers. A day or two later Katsuhiko comes across the same member of the film crew and Koichi’s vehicle stuck in a muddy road; unwillingly he is roped into driving them around as they search for a river for one of their scenes. Koichi comes across as a sullen, lazy young man and understandably Katsuhiko quickly becomes frustrated with him and often demands that he do something (without knowing that Koichi is in fact the director).

Katsuhiko also has a son of a similar age as Koichi, and with the same name, however his son quits jobs easily and their relationship is characterized by a lot of anger on Katsuhiko’s part toward his lazy son. It is easy to see the link between how he views Koichi his son, and Koichi the director. However, after being roped into being a zombie, with a comical result, and seeing himself on the screen at a test viewing, Katsuhiko becomes enamoured with film making and fascinated with the zombie story. Koichi for his part has no confidence in what he is doing, and mortified by the test screening attempts to flee. Recaptured by his film crew he is forced to carry on with the film, but this time he increasingly has Katsuhiko by his side whose enthusiasm is really infectious and whose support helps Koichi discover some measure of confidence in himself and what he is doing. Katsuhiko is also key to gaining the help of the local villagers. We are given the impression that, despite lacking enough extras, Koichi and the film crew never thought about asking the local people to help.

This humorous movie shows Katsuhiko’s development, reconnecting with people as, simultaneously, Koichi finds his feet as a director. Across the chasm of an age gap they show how different generations can learn to understand each other. Koichi finds in Katsuhiko the support that he never enjoyed from his own father. The lack of confidence he has in himself and his own script can be linked back to this, while Katsuhiko gives Koichi the absolute faith and support that he doesn’t give to his own son, something he begins to understand himself. In the midst of this they find other things in common, and they both gain a new perspective on their lives.