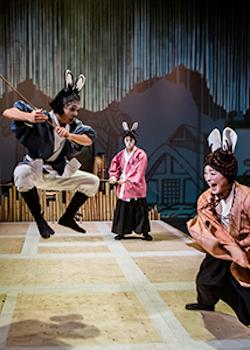 Usagi Yojimbo, presents an adventurous rabbit samurai and teaches us of war, responsibility and honour in Edo period Japan – austere subjects made delightfully light with the addition of rabbit ears.

The small but charming Southwark Playhouse, lit up brightly on the grey Newington causeway, was the perfect venue for this energetic fantasy tale. From the very beginning of the performance the audience were invited into Usagi’s world, and were reminded throughout that we were not just watching this play, but were Usagi’s fellow adventurers. Even prior to the start of the show, audience members were invited to practice their sword skills with the boundlessly energetic cast. Pretty interludes throughout the play ensured that we remained fully engaged in the story, in which Miyamoto Usagi, a young rabbit, leaves home to become a samurai warrior under the training of his eccentric but ferocious Lion sensei.

The creative team certainly had their work cut out for them in creating the script, distilling Stan Sakai’s 30-volume comic book series into a 95 minute show. The plot is easily digestible for children despite the distinctly adult themes of war and honour, something reminiscent of Hayao Miyazaki who proves infinitely capable of handling such subjects in many a Studio Ghibli film. Indeed, the director Amy Draper has admitted to being heavily influenced by his work in the making of this piece. My only grievance is that Usagi is somewhat lacking in the heroic female protagonists that Miyazaki so often depicts. Instead the talented fighter and feisty girl bunny Mariko, played by the firecracker actress Haruka Kuroda, acquiesces somewhat meekly to stay at home in the village. Although presumably staying true to the comic, it would have been nice for the young audience to see that girl bunnies can be fierce warriors too.

Despite this, there were numerous funny, quirky and spirited characters for us to follow, each distinguishable by their unique headdress, creatively anthropomorphising the host of different animals. The cute nuances of the occasional bunny hop or growl made this a fun and nostalgic show for adults – think Beatrix Potter with a 17th-century Japanese samurai twist – and most definitely a truly mesmerising performance for children. The entire show is accompanied by a live taiko drumming soundtrack, composed by Joji Hirota.

Usagi Yojimbo is both a fun way to learn a bit about Edo period Japan and a brilliant alternative to the usual Christmas pantomime. With an entirely bamboo stage and beautiful clean aesthetic, this production presents Stan Sakai’s work in a way that he would doubtless be proud of, creating a wonderfully exciting and distinctly Japanese production that will keep you entertained throughout. Usagi Yojimbo is playing at the Southwark Playhouse until 4th January 2015.