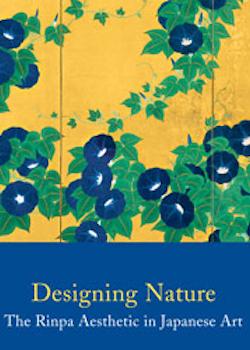 This catalogue was published in conjunction with the exhibition ‘Designing Nature: The Rinpa Aesthetic in Japanese Art’ at the Metropolitan Museum of Art in New York from May 2012 to January 2011.  It is much more than a finely produced catalogue as it introduces some of the most colourful paintings and artefacts of Edo Japan.

The book begins with a history of the Rinpa school,(1) before and after Kõrin Ogata (尾形光琳 – 1658–1716).(2)  John Carpenter suggests that ‘The highly stylized representation of landscape in early medieval Japanese paintings…can be seen as anticipation of Rinpa’.

Sõtatsu Tawaraya (俵屋 宗達 ˗ d.ca.1640) and his circle ‘drew inspiration from  the rich tradition of earlier yamato-e’ in paintings of artists in both the Tosa and Kano traditions.

Sõtatsu’s circle produced shikishi (poem cards) based on The Tale of Genji and the Ise-monogatari.  The following is a painting by Sõtatsu of a scene from the latter: 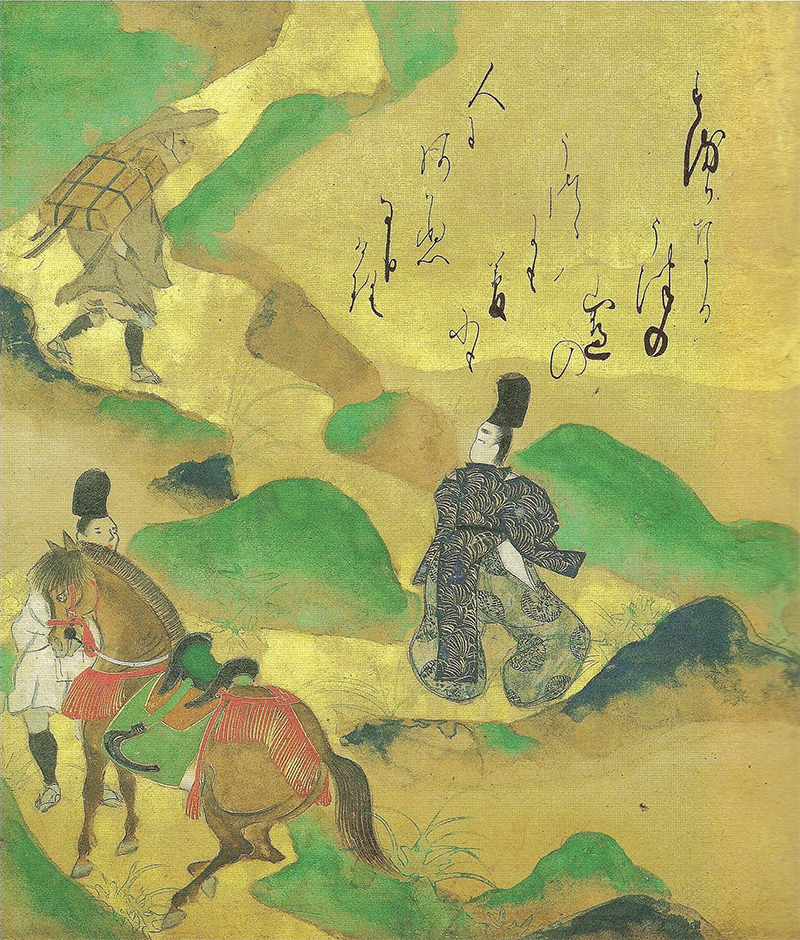 Carpenter goes on to discuss the flowering of Rinpa and the masterpieces of Kõrin Ogata (1568-1716) as well as the works of his brother Kenzan Ogata (尾形 乾山, 1663–1743)2 and his circle, who applied the Rinpa style to ceramics. Two screens of iris by Kõrin were in the exhibition and reproductions are included, but readers of this review are likely to have seen many reproductions of these masterpieces and may instead or in addition also enjoy the following painting below by Kõrin of a ‘tiger’ although it lacks the striking colours for which Kõrin became so famous. 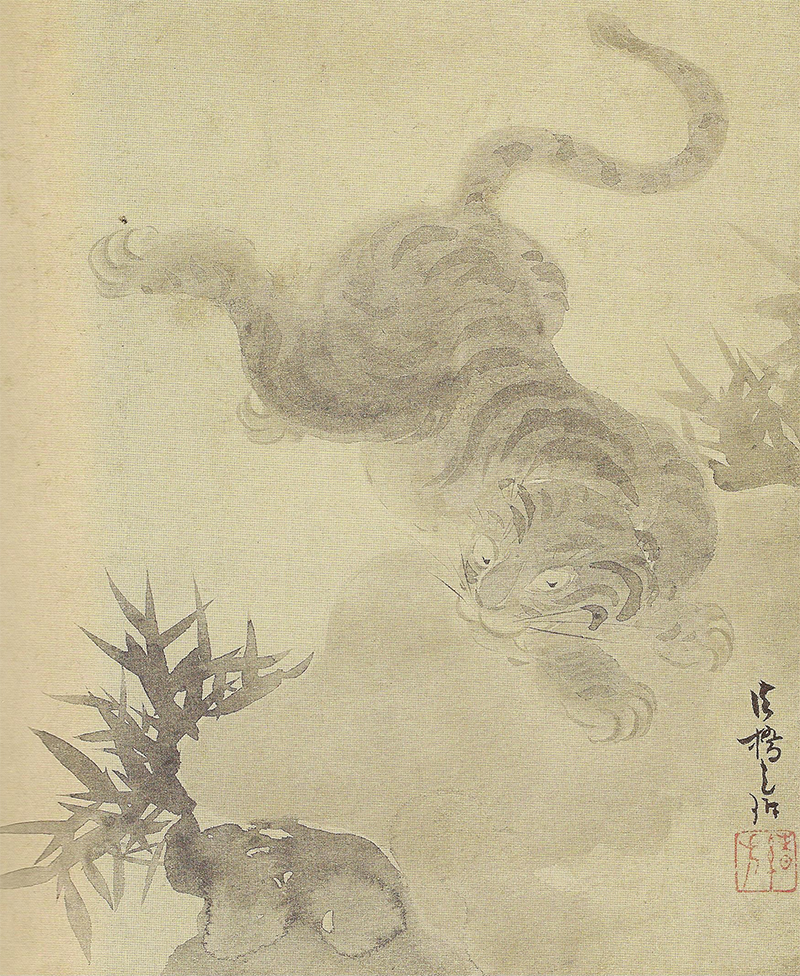 Among the many artists who continued in the styles, which Kōrin had made so famous, the name of Hōitsu Sakai (酒井 抱一, 1761-1828) stands out.  I have always admired Japanese paintings of birds and this one below of ducks in flight by him seemed to me both life-like and imaginative.

Carpenter describes and illustrates the various subjects, which Rinpa painters chose. In addition to illustrating traditional Japanese tales, they portrayed poets and sages, but as became Japanese painters, in whose tradition the depiction of nature was a key element, they excelled in depicting birds, trees and flowers. The Japanese, as befits an island country, have an affinity with the sea and the Rinpa painters were particularly adept at depicting waves. Their stylized wave designs had a particular and understandable appeal to the makers of Japanese kimono who were based in Kyoto. Many of these designs inspired western artists and seem strikingly modern. The following two illustrations in the catalogue of Rinpa designs for obi and kimono particularly caught my eye. 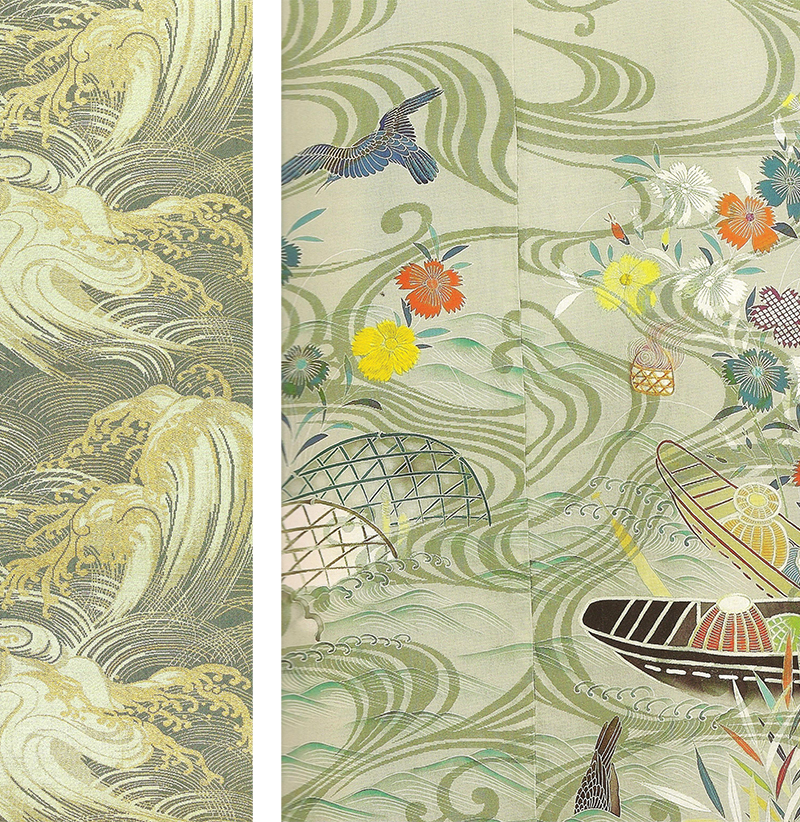 The Rinpa painters inspired the Japanese artists who resisted the pressures of westernization and the development of yoga (western style painting) and produced pictures, which kept alive Japanese traditional styles in Nihonga (Japanese style paintings). As Carpenter points out the influence of Rinpa can still be seen in many modern designs.

Anyone interested in the history of Japanese art or in Japanese design and depiction of nature should buy a copy of this catalogue while it is still in print and easily available e.g. from Amazon.

1) The Rinpa school was a key part of the revival in the Edo period of indigenous Japanese artistic interests described by the term yamato-e. Paintings, textiles, ceramics, and lacquer-wares were decorated by Rinpa artists with vibrant colours applied in a highly decorative and patterned manner. Favoured themes, which often contained evocative references to nature and the seasons, were drawn from Japanese literature, notably The Tale of Genji, The Tales of Ise, and Heian-period poems composed by courtiers.

2) Korin Ogata (尾形光琳 – 1658–1716) and his brother Kenzan (尾形 乾山, 1663–1743) were members of a Kyoto family of textile merchants that serviced samurai, some nobility as well as city dwellers. The family was distantly related to Koetsu Hon’ami (本阿弥 光悦 1558–1637). The Ogata family owned a number of objects made by Sõtatsu Tawaraya (俵屋 宗) and Koetsu, which Korin meticulously studied. Working in vivid colours or ink monochrome, often on a gold ground, this prolific and versatile artist developed a painting style which was more abstracted and simplified than the works of his predecessors. Korin used decorative and bold designs not just to ornament paintings but also for textiles, lacquer-wares and ceramics. Transmitted by means of pattern books and manuals, the work of the Ogata brothers inspired numerous other craftsmen.