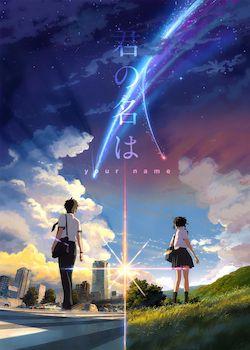 Since anime titan Miyazaki Hayao formally announced his retirement back in 2013, there has been a collective anxiety over who might prove a worthy successor. After his reluctant heir Miyazaki Gorō failed to make much of an impact with 2011’s gentle From Up On Poppy Hill, anime fans have started to look beyond the aegis of Studio Ghibli to find one. And so enter Shinkai Makoto. He began his career as a graphic designer, before realising his dream of writing and directing animations in the early ’00s. His fifth feature, Your Name is now Japan’s third highest grossing domestic film of all time, sandwiched between Miyazaki’s Howl’s Moving Castle and Princess Mononoke.

It tells the story of teenagers Mitsuha and Taki, who have the humdrum of their daily lives disrupted when they mysteriously start swapping bodies. First we see Tokyoite Taki go through the disorientating experience of living a day in the body of a stranger – waking up astonished to find that he has breasts (a recurring joke in the film) before shambling through Mitsuha’s school day in the rural, conservative town of Itomori. Mitsuha then, is equally overwhelmed when forced to negotiate Taki’s macho schoolmates and chaotic part-time job as a waiter. The pair swap back and forth at random and once returned to their original bodies leave each other instructional text messages as a means of damage limitation.

The first half of the film perfectly captures the giddiness and absurdity of adolescence, Shinkai using the body-swapping plot device to explore the transformation and lack of control that define that awkward stage between childhood and adulthood. In the second half, the tone darkens as Itomori (a fictional town loosely based on Shinkai’s birthplace) is threatened by natural disaster, leading Taki to embark on a time-hopping adventure to save the town – and, moreover, the girl – to whom his life is now irrevocably tied.

Aside from its fast-paced plot and sensitive portrayal of the teenage psyche, the film also excels visually, its epic vistas bringing to mind the fantastical landscapes of English romantic painter John Martin. Whether depicting the verdant fields and star-filled skies of Itomori or the power-line strewn labyrinths of residential Tokyo, each scene has been beautifully executed. Like Miyazaki, Shinkai possesses an attention to detail that can elevate a piece of work to greatness and there is little in this film’s content or presentation that hasn’t been finished with meticulous care.