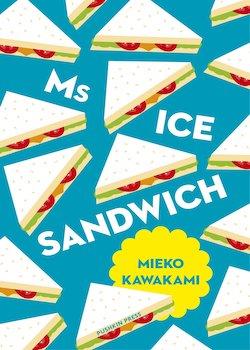 Despite the fact that Kawakami Mieko’s Ms Ice Sandwich is a short novel, not more than a hundred pages, the touching story crafted by the awards winning author is sure to live long in the memory.

The plot revolves around an unnamed boy and his everyday life in his family’s house. His father died when he was younger and he now lives with his bed-ridden grandmother and his mother, who is busy spending her time between her mystical job and her phone. During a lonely summer, the young protagonist develops an affinity for visiting a local department store where he buys sandwiches all the while doing so merely to catch a glimpse of the clerk, nicknamed ‘Ms Ice Sandwich’, on account of the peculiar ice-blue make-up she uses on her eyelids. Gradually   the boy becomes obsessed with her unusual beauty and upon returning home, draws her face everyday, paying particular attention to her mesmerising eyes.

However, things begin to change when, during one of his daily visits, the boy witnesses an altercation between his favourite clerk and a customer. This is followed by disturbing rumours regarding her appearance, which persuades him to keep his fantasy to himself, with his grandmother, unable to communicate due to her medical condition, the only person who knows about his feelings. As the story develops, he encounters a fellow lonely soul in Tutti, a lively girl who begins to help him gain courage to face Ms Ice Sandwich, and his feelings.

Kawakami’s has been acclaimed as a talented writer in Japan since finishing her singing career in 2006. Among the many prizes that she was awarded, her most notable one might be the Tsubouchi Shoyo Prize for Young Emerging Writers she won in 2007 for her debut novel My Ego Ratio, My Teeth, and the World. The prize was received by Murakami Haruki the same year in the established writers category, and in Ms Ice Sandwich, it has come clear why she keeps such fine literary company.

Successfully addressing topics such as loneliness, love, loss and friendship through the eyes of young protagonists, Kawakami finds a truly poetic voice in her story where she conveys the troubles of youth, especially in relation to sentimentality and attachment. It is here that the novel’s strength really lies as it takes the reader back to their own childhood, challenging them to confront their own youth through the author’s delightful and minimalistic style. She gently reminds us to not underestimate children’s intelligence nor their perception of the world. This is especially powerful in relation to the character of Tutti who expresses such themes in the following line:

‘…there’s loads of hard stuff in life, and maybe when we’re grown-ups, there’s going to be tons more hard stuff to deal with. And when that happens, I’m going to tell myself I can’t give in or freeze up and get discouraged and do nothing. I have to believe that’.
(Kawakami, 2013, p. 76)

In contrast to the youngest protagonists’ wisdom, we are also presented to the folly of adulthood. Both the central boy and Tutti’s loneliness can be prescribed to a lack of parental care or involvement, their lives dominated not by their children or their duties as adults, but rather by the excesses of medias such as television and smartphones. Besides, the argument witnessed in the supermarket leaves the boy both overwhelmed and puzzled as the rumours arising from that situation reflect the narrow-mindedness of the adults.

This is yet another example of Kawakami’s strength as an author; her ability to comment on what is and has become normative in our society, and in turn what it has begun to neglect. Kawakami herself neglects to pursue ‘absolute truth’ with regards to gossip, rumours and hearsay, and instead maintains her more emotional presentation to the characters, allowing us to empathise and identify. Nevertheless, Kawakami’s tone never gets judgmental, rather, the genuine comments resulting from her characters’ observations lead the reader to his own reflections about prejudices and acceptance. As such this creates a refreshing tale of understanding and acceptance.

The translator Louise Heal Kawai should also be commented on her excellent translation from the original Japanese source to English where she manages to make the story flow in a natural manner.Her translation remains faithful to the original version, retaining the sensibility and sensitivity of the main character’s personal journey and presenting it in an easy-to-read format that English readers should no doubt massively appreciate.

Ms Ice Sandwich is unusual for sure. A summer love story that segues neatly toward a comical (and at times tragic) coming of age tale that offers a fine societal critique of adulthood in our times.  It never falls into the melodramatic, but does have a slick sentimental edge which seeks to remind us of the importance of acceptance, letting go and moving on. A hopeful message which validates the talent of the author and makes it a good introduction to Kawakami Mieko’s universe.