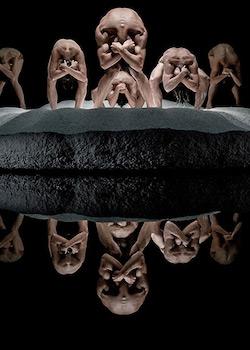 Award-winning Japanese visual artist Nawa Kohei has become a prominent artist through his participation, to great acclaim, in major international exhibitions. His piece Foam featured in the Aichi Triennale 2016 in Japan, making a profound impression on Franco-Belgian choreographer Damien Jalet. Jalet doggedly pursued Nawa in order to collaborate and, luckily, was successful. The rest, as they say, is history and artistic partnership ensued in the form of Vessel.

We waited in anticipation in the dark, aware of a whirring noise in the background. The lights eventually came on, revealing a curious apparition, similar in shape to a space ship or a crater.

Entwined bodies – forming two separate orbs – were on either side of the vessel. The orbs, made of tightly knotted limbs and arms, resembled walnuts in shells. The seven bodies were naked apart from discreet pants.

In the tangled group on the left, legs were moving and someone was doing a shoulder stand to the electronic score by Hara Marihiko and Sakamoto Ryuichi. On the right-hand side, arms were stretching out in a beseeching manner, or perhaps they were legs. Someone began pushing out from the tangle, slithering out to the centre of the stage, producing a reflection. The startling effects were those of a distorting mirror, created by hitherto unnoticed water on stage. Some dancers raised themselves up into shoulder stands and appeared very animal-like. Suddenly, the crater, the central vessel onstage, appeared to be more like a rock for tortoises and amphibians (than the aforementioned crater).

The seven bodies stood up, heads missing. Each head was bent down towards the chest and pinned down by each dancer’s arms, criss-crossed. The dancers began moving independently of one another, scuttling like grasshoppers, locusts and crabs. It was all very contemporary while also primeval and difficult to understand. I could feel the intensity of the audience’s attempts at grasping what was happening.

The dancers plunged into the water, splashing it around the stage. This explosion punctured the tension in the air. The dancers raised and lowered their shoulders. Their bodies then began crouching up and down in tune with the music, as if each dancer were being pressed down like trumpet finger buttons, bobbing up and down.

A couple of dancers, still headless, moved onto the “rock”. The reflection in the water was mesmerising as the dancers came together to create living sculptures. A variety of faces could be found in the forms. The gaps between each dancer’s upper shoulders and where the arms were crossed looked like eyes. I saw the face of a woman, then of a hag and of a cyclops. I detected a samurai helmet and a number of geometric forms. It was utterly kaleidoscopic.

The dancers headed into the crater (again!). One dipped a hand into a white soapy gloopy substance which he rubbed all over himself, as if performing a ritual. We finally saw his head, briefly. He sank into the water and steam rose all around him.

The material used by Nawa to create the crater/vessel, is a potato-ey substance which remains solid as long as one keeps walking on it but returns to liquid as soon as one stops, when life ends.

Jalet was inspired by the story in the Kojiki of the creation of Japan from mud and water. The vessel is land, said Jalet, the land of the dead. He wanted to experiment with the idea of the underworld, the middle world and heaven. In Vessel, the dancers begin in the underworld and finish above the clouds. Nawa and Jalet’s next project will take place on the middle level.

As Jalet said in the Q+A after the show, sculpture is not ephemeral. Yet here it was! Jalet said that dance is ethereal, yet during this production bodies fused and created sculptures. This duality is exactly what Jalet and collaborator Nawa Kohei wanted to achieve.

According to Jalet, he also intended for the viewer to project onto the dancers/sculptures and vice-versa. I realised that was why I had given the principal object on stage any number of different names. It was a vessel and so were the dancers – able to embody any form or quality that the viewer projected on them. It is an empowering and liberating concept. The dancers, headless, and mostly with their backs to the audience throughout, were stripped of identity, age, ethnicity and gender.

As Jalet said in the Q+A, the dancers created an infinite number of possibilities of transformation and geometry. Some were magical and beautiful, some funny and some grotesque. After such an intense and agile performance, it is nigh on impossible to view the body in the same way ever again.