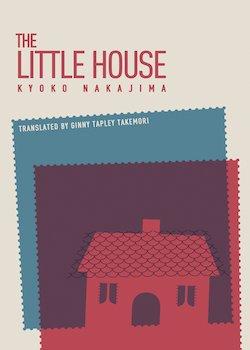 The Little House shares a title with a 1942 picture book by American children’s author Virginia Lee Burton. In that story, a small house, built on a hill in the remote countryside, becomes intrigued and then engulfed by urban sprawl. With age she feels shabby and forgotten, especially squashed between pompous mansions and indifferent skyscrapers. Eventually, having stoically accepted she will soon be demolished, the little house is surprised to find hope and renewal when the great-great-granddaughter of her original builder comes knocking.

The echoed title is no accident. The famous children’s book (it was adapted as an animated short by the Disney Corporation in 1952) plays a pivotal role in Nakajima Kyoko’s novel, appearing as one of the final clues to a poignant mystery that reveals the deft skill of a subtle storyteller.

On the surface, The Little House is a collection of memoirs by Taki, a housekeeper and governess who spends years in the service of the wealthy Hirai family. When the story opens Taki is an old woman, recently commissioned to produce a garishly titled, ghostwritten volume of household advice, “Granny Taki’s Super Housework Book”. Following its success, the editors are ready for a sequel. Taki, however, wishes to write something more meaningful: an autobiography.

She begins in 1930, still a young girl fresh from elementary school but already leaving her family in northern Honshu to serve as a housemaid in Tokyo. She recalls the practice was common at the time, particularly for large rural families of modest means. As early as seven, she writes, young girls ‘either went to primary school or were sold off’ to Geisha houses and brothels. Understandably, Taki counts herself lucky. In Tokyo, she is relatively well treated in the employ of several households, including a stint in the home of a famous author.

Under the Hirai’s roof (atop the “little house” of the title) the story coalesces around Mistress Tokiko, the beautiful wife of a toy factory manager, and their son, Kyoichi. Taki’s relationship with the Hirai family and its secrets — as well as the discovery of her own — drive the novel. The tale is told in Taki’s voice until nearly the end, when we arrive at a last chapter that suddenly shifts the point of view. The result is a final punch of imagery, dramatic irony and wistful regret that persists well beyond the boundaries of the book.

Of course, this last shift makes it difficult to discuss the story in too much detail without spoiling the impact of many bittersweet moments Nakajima sets up throughout. I will say, however, The Little House compares favourably with other notable works that tackle similar themes. Fans of Kazuo Ishiguro’s Remains of the Day or even Mishima Yukio’s Confessions of a Mask will find things to like here.

Along with a delicately crafted story, The Little House is also filled with captivating historical insight into twentieth century Japan. Early on, Nakajima briefly focuses on Japan’s preparation for the Tokyo Olympics and the Grand International Exposition, both planned for 1940. Meant to celebrate the 2600th anniversary of the accession of Japan’s first Emperor Jimmu to the throne, the Grand Exposition featured events planned solidly from March to August of that year. Delegations from around the world were set to attend, which is to say nothing of the 1940 Tokyo Olympics, meant to immediately follow in September.

Nakajima reveals how, in the minds of average Japanese, it was easy for these internationally prestigious events to overshadow distant wars in Asia and Europe. Mr. Hirai, for instance, a successful toymaker, is particularly caught up in preparation. He exuberantly begins designing all the many sporting- and patriotic-themed trinkets he will inevitably sell when the world’s eyes turn to Tokyo. With the outbreak of war in Europe, however, the Japanese government has little choice but to cancel both events.

Having said this, the book’s historical detail is not included solely for authenticity. It is not merely a way of gaining the reader’s trust and sharpening the atmosphere. It serves these purposes, certainly, but it is clear Nakajima chose each detail to serve the story. Indeed, Mr. Hirai’s exuberance — and especially his sudden need of talented new toy designers — plays a pivotal role come the book’s climax.

Also worth mentioning is a second level of detail, that of food and cooking. Anyone familiar with Japanese popular culture will be aware that food — its production, preparation and consumption — pops up with unusual frequency in books, film, television, manga and even music. In The Little House Nakajima makes artful use of the trend. Taki is a housekeeper, after all, expressly charged with feeding the Hirai household. This results in passages of the novel that are, quite literally, delicious.

Shortly after joining the Hirai family, Taki wishes to explain  ‘why the end of the year used to be such a busy time.’ She goes on to list the many discrete ingredients and timings required for a successful osechiryōri, the elaborate New Year’s dish meticulously prepared days in advance of January 1. Later, after the war begins and certain ingredients falter, the sudden arrival of visitors forces Taki to prepare an impromptu meal with limited resources. ‘While the guests enjoyed a drink with a couple of snacks of vegetables simmered in soy sauce and whitebait boiled in sweetened soy sauce, I steamed some rice together with shellfish preserved in mirin, ginger, and soy, and cut up some sardines marinated overnight into bite sized pieces, coating them in potato starch before deep frying them’.

Out of context (or perhaps to readers without a taste for Japanese cuisine), this listing of ingredients could appear dull, but once again Nakajima’s details inform the story. Taki’s relationship with the Hirai family is one of formal service; food is her most sensual connection to the people with whom she spends her life. Taken this way, her meticulous memory for kitchen work speaks volumes about a character who, even at times unknowingly to herself, expresses emotion and desire in the language of cooking, serving and eating.

The result is a slowly gathering weight of wistfulness and dramatic irony, peppered with moments when readers may come to believe they know Taki better than she knows herself — and they may be right. Nakajima strikes a tantalising balance between what each character knows and what readers may assume. The effect is a subtle suspense every bit as varied and delicious as the grand first meal of the year.