My Year of Meats 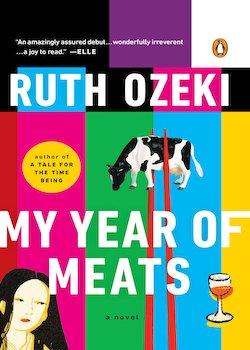 If you’ve read any work by Ruth Ozeki, you know that her writing has the power to draw you into her world. “Ozekiland”, as she likes to call it. A world that teaches us that time travel is possible, Zen Buddhism is strangely familiar and the curious lives of Japanese schoolgirls are a force to be reckoned with. In a word, Ozekiland allows us to discover lives we never knew we needed and My Year of Meats is no exception.

In true Ozeki-style, the story is two-fold. We are first introduced to Jane, a Japanese-American documentary filmmaker working in partnership with BEEF-EX, a corporation whose aim is to promote the beauty and health benefits of American meat to Japan. Through the creation of a new TV series, My American Wife!, Jane travels across the country in search of “model housewives” for her Japanese audience. Wives whose concern is no longer ‘old-fashioned consumerism’ but ‘contemporary wholesome values’ like providing ‘good, nourishing food for her entire family. And that means meat.’

Running parallel to this is the story of Akiko Ueno, a shy manga-artist in Japan and new wife to John, a deeply misogynistic employee of BEEF-EX. From her naivety and ingrained ideologies, she enters into this abusive relationship with the expectation to purely cook and conceive for her husband. Without this aim, she is useless. Through each segment of My American Wife!, Akiko’s eyes are soon opened to alternative possibilities of living in the world and having a family. For Akiko, Jane’s housewives are perfect; a sweet young mother with a picture perfect family (and a husbands dark secret), a flamboyant Southern farmer, (whose meat consumption has disturbing consequences on her child’s development), and a black vegetarian woman (whose lesbian lifestyle is still taboo in Japan). Akiko slowly discovers her true desires and what fertility really means to her.

When Ozeki writes, it’s clear she knows what she’s talking about. As a Japanese-Canadian herself, she intertwines her facts with her fiction creating candid characters that highlight the difficulties of cultural assimilation between consumerist America and traditional Japanese approaches to family. Both Jane and Akiko are on paths of self-discovery that, through fate and time (occurring themes in Ozeki’s writing) bring them a step closer to each other. Each woman learns to acknowledge and accept their past in order to take control of their future. Their journeys prove to be perfectly imperfect and illustrate the heterogeneity of the female experience in the modern world.

The story also sheds light on the link between diet and fertility, particularly in the case of the “mad cow disease” or BSE (Bovine spongiform encephalopathy) of the 90’s, whose outbreak effected meat consumption in the UK, US and Japan. During the late 80’s, a case of BSE was confirmed in the UK, a new disease found in cattle. Fear that this could be transmitted to humans in the form of Vcjd (a slow-degenerative disease), consumption of specific offal was banned and 3.7 million cattle were destroyed. Despite these precautions, human cases were eventually identified and found to be the causes of death. Eventually, media attention dissipated and the supposed threat of the disease disappeared. Now, over two decades later, can we confirm that our attention to meat consumption has changed?

Thanks to the rise of social media, health has now become something to be celebrated, questioned and investigated. More attention has been placed on British grown food, organic farming and veganism and consumers have started to ask questions. My Year of Meats asks us to transfer these concerns to meat. Much like Jane’s housewives who toil over adorning and decorating their meat to produce an appetising meal, the same attention needs to be placed on the care of cattle. How are they kept? What is their diet like? How are they slaughtered? If we are becoming a fast-paced, no-nonsense and lethargic society, then so is our food and our attention to it.

My Year of Meats is essentially a story of the human life and the human body. It asks us to question what it means to be a woman, what we put in our bodies and how our offspring will value themselves in a world we create. It teaches us that time is not only healing but changing. Fertility and food now come in various forms and no two experiences will be the same. These notions are not just about comfort, but personal progress and happiness; two notions integral to every humans journey of self-discovery.