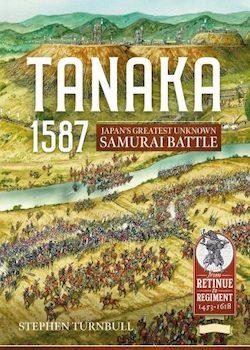 Tanaka 1587: Japan’s Greatest Unknown Samurai Battle is part two of the ‘From Retinue to Regiment’ series which is currently limited to four books and covers the period 1453 to 1618 connecting the High Medieval Period to the Early Modern Era.

For those who are familiar with Stephen Turnbull’s many publications not much of an introduction is needed. His generally enjoyable romps through Japanese history, mainly focused on the samurai, ninja and historical battles, are always well laid out, easy to read and, even though containing much historical detail, are aimed at the non-academic. The cover title though is rather misleading. The battle isn’t that unknown in Japan. However this is clarified early on in the text when the author explains that the ‘unknown’ factor relates, predominantly, to the rest of the world. There is however, prior to this publication, a dearth of information in English relating to this specific conflagration.

The book’s narrative revolves around the Higo-kunishu Ikki (Higo People’s Revolt), the conflict which helped trigger the katanagari sword hunt in 1588, commonly referred to as the Taiko’s Sword Hunt, to deny swords to Toyotomi Hideyoshi’s enemies and the peasantry. The conflict coincided with Hideyoshi becoming Kampaku (Imperial Regent) and is remembered every year on the 2nd Sunday of February with the Sengoku Higo Kunishu Festival at Mikawa Sogo Shishatonari in Kumamoto.

The part of this history which is referred to as the Battle of Tanaka Castle (Tanaka-jo no eki) is described locally as one of Japan’s most important historical events, ‘a grand battle’ between Toyotomi samurai and Wani kunishu (local troops). It is reproduced during the festival in order to convey the event to posterity, although the author rather mockingly describes it as ‘a noisy, enthusiastic and highly inaccurate recreation of the battle’.

The historical context leading up to the siege of Tanaka Castle, along with the complex and seemingly ever changing alliances and conflicts in the region, is explained with great clarity. The account of the transition from the Warring States period to the gradual reunification of Japan under first Oda Nobunaga then Toyotomi Hideyoshi and finally Tokugawa Ieyasu (who, according to legend, in sequential order boiled the water, made the tea and drank it) are quite detailed yet probably much clearer and easier to understand than many explanations seen in previous publications.

What then follows is an account of a rather more localised Kyushu conflict, initially between Hideyoshi’s forces and the Satsuma Shimazu prior to the Higo Rebellion, the final part of which was their last heroic stand at the siege of Tanaka Castle.

There is a lot of necessary detail about the involvement of the loyal vassal of the previous ruler Oda Nobunaga, the Daimyo Sassa Narimassa, in the process of centralising control in the region. The account goes on to explain that it was this and the reallocation of the land belonging to the local independent kokujin (provincial samurai) to Narimassa’s vassals, with the accompanying loss of prestige and economic status, which fostered the resentment and eventually led to the Higo Rebellion and the destruction of Tanaka Castle by the forces of Hideyoshi.

The chapter on the Wani Family and Tanaka Castle is probably the most revelatory given that not a lot of information, especially the most recently discovered, about the layout of the castle has been available to the general reader.

The narrative is laid out in a logical sequence and even though the initial context setting seems somewhat wide-ranging, it really is necessary to lay the foundation for the culmination of the story that leads to the siege. The book doesn’t disappoint with the illustrations and photographs which range from the sort of thing that might be expected in a computer game through reproductions of Japanese prints to the author’s own photos, along with one photograph, a bit of a coup, which is accredited to Gensaiji Temple in Yamaguchi Prefecture.

Though a relatively small book the amount of information contained and covered within its just over one hundred pages is extensive. Whilst the text is a reasonably easy read, and as pointed out is non-academic, there is a lot of detail to digest. The book is definitely one for either the visitor to the area or the serious Japanese military campaign buff, or both.