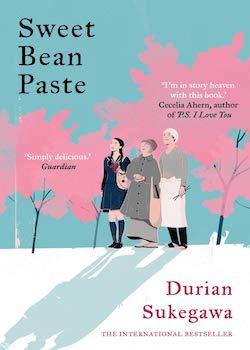 Durian Sukegawa’s Sweet Bean Paste is a tender story chronicling the unlikely bond between an ex con and an elderly lady with a shadowy past. The novel starts in a comical vein like a classic ‘odd couple’ narrative but turns into something else: a poignant meditation on the generation gap, stigmatization in Japan, the perils of lazy prejudice in a stratifying society, the value of devotion to one’s craft and how we can find meaning in the mundane, no matter how tawdry or hemmed in our circumstances.

The main character is Sentaro, a down-on-his-luck part-time worker who runs a dorayaki (bean paste pancake) shop on his own in Tokyo. Sentaro is a bit of a loafer and jobsworth; he’s only working in the shop to pay off debts and doesn’t even like dorayaki. He is approached one day during cherry blossom season by a wizened old obaa-san woman called Tokue, who asks him for job. He dismisses her at first, but she persists and once he has tasted the exquisite bean paste she’s left him in a tupperware container, he is won over. He invites her in to start training him in the making of proper dorayaki. Customers start to notice the difference between the insipid flavour of the processed stuff he has provided hitherto and this gorgeous, smooth, tenderly concoction, conjured up according to a recipe developed over 50 years. As their awkward relationship blossoms, the business starts to pick up and thrive and their lives change.

But just when you start thinking that this story will turn out to be a sort of twee, Japanese version of Breaking Bad with Sentaro as Jesse and Tokue as Heisenberg, teaming up to cook up an all-conquering dorayaki empire, you’ll find out you’re sorely mistaken! It is a Lynchian Inland Empire that this novel explores: finding the meaning in a human life in the face of one’s disappointment at one’s unfulfilled potential.

Tokue turns out to have been endowed with special super powers. But just like many a super hero, her special power – in this case her ability to conjure up great tasting bean paste and other sorts of confectionary – has emerged from an early scarring by trauma she has spent a lifetime to overcome.

Superficially, a main theme is love of food and food as symbolic mediator in Japanese society. Think of the bento box as a signifier of mother love, or the nabe stew as a metaphor for familial togetherness. The novel put me in mind of the film adaptation of Joanne Harris’s book Chocolat (2000) where an outsider opens up a chocolaterie in a French village and also of the classic Japanese film, Tampopo (1985), where 2 truck drivers help a struggling ramen shop improve their broth, to rescue the business. Perhaps the film it reminds me of the most of is Jiro Dreams of Sushi, the critically acclaimed 2011 Japanese-American documentary where Jiro’s punctilious attention to the minutiae and dedication to his own method for prepping sushi take centre stage. What that film and this book have in common is both protagonists cherish the concept of ikigai (‘reason for living’) and a related idea of kodawari. Ken Mogi in his book The Little Book of Ikigai (2017) defines kodawari as ‘a personal standard, to which the individual adheres in a personal manner. It is often, though not always, used in reference to a level of quality, or professionalism to which the individual holds… Kodawari is personal in nature, and it is a manifestation of pride in what one does’. [1]

Tokue’s kodawari is the acute attention she gives to every stage of the process e.g. the way she listens to the beans. Early on, Sentaro is baffled as Tokue talks about the critical importance of communing with azuki, during the preparation process and to ensure one knows ‘how they feel’ so as to ensure that their latent taste is lovingly coaxed out.

The azuki beans are almost protagonists in their own right. I was reminded of Miyazaki films, the idea of Shinto animism, bidding us give respect to the humblest of objects, but also that classic of Japanese anthropology Rice as Self by Ekiko Ohstuka-Tierney where she situates rice historically as a Japanese spiritual essence, remarking on the presence in the ancient records of the Nihon Shoki of ina damashii or souls of the rice grains. [2]

For Tokue this simple kodawari is a major part of her ikigai, it endows her a sense of value in a life of thwarted ambitions; a life blasted at the root by misfortune and blighted by prejudice and tragedy.

In the afterword to the book, Sakegawa writes about his motivation for having written this novel; that of every life, no matter how futile, being equal in the light of the universe:

‘Some lives are too brief, while others are a continual struggle. I couldn’t help thinking that it was a brutal assessment pf people’s lives to employ usefulness to society as a yardstick by which to measure their value.’

In this book, there is an implicit contrast made between the superficial and speedy materialism of modern Japan and traditional Japan and its crafts, and its dying arts, as epitomised by the recognition of Ningen Kokuho (Living National Treasure). As an appreciator of the beauty of lacquerware and practitioner of calligraphy this spoke to me.In terms of his writing, the book was easy to read. Durian’s prose is as silky smooth as Tokue’s bean paste and his preference for the succinct sentence is like her eagle eye for the best beans. Credit should also be given, of course, to the translator Alison Watts for her easy style. Later in the novel the epistolary format is used to give us insight and to eavesdrop on the thoughts of both characters.

The one thing that didn’t ring true for me was the character of Wakana, who seemed a little bit of a sidekick and lacking her own agency. Kurt Vonnegut once wrote that every character should want something – even if it is a glass of water – I would have liked to have seen her character fleshed out. I also felt that the tension dissolved a little as it entered the final third and I would have liked to have had an inkling about how Sentaro would turn out – either by creating his own dorayaki brand, some sort of reconciliation with his father or perhaps by returning to writing and fictionalising Tokue’s life.

Nevertheless, I’m quibbling. I really enjoyed this book. It was very touching and made me nostalgic for my time in Japan. Some of my best friends in Yamaguchi were elderly obaa-san women. Their wisdom, warmth, wit and kindness made it a more hospitable experience. I also loved the focus on the food as a Japanese obsession. I also loved the focus on food as a Japanese obsession. The novel’s take on Japanese food stuff as metaphor for life resonated with my memories of a much beloved ex girlfriend whose family name was Usuki (the mortar in which mochi are pounded. Finally, I taught in a school for those with learning difficulties whilst on the JET programme in 1999 and felt sad at the prejudice they faced in society at large. In dealing with leprosy, Sukegawa’s novel avoids striking a sanctimonious note. He simply tells a human story with an unobjectionable moral at its heart: when we look for the humanity in every person – no matter how inauspicious the circumstances, it brings the best out in them and us.

For me, the main take out was the value of living authentically and seeing the blessing in every blow.

Last word to Tokue, who writes to Sentaro, in order to console him when he is feeling discouraged:

‘Your life is meaningful too. The time you suffered behind bars, your finding dorayaki – I believe it all has a purpose… All experience adds up to a life lived as only you could… You may never become a writer or a master dorayaki cook, but I do believe there will be a time when you can stand tall…’.

[1] Mogi, Ken (2017). The Little Book of Ikigai: The Essential Japanese Way to Finding Your Purpose in Life. Quercus Editions.