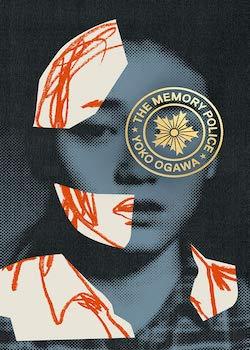 The original title of Ogawa Yoko’s latest novel to be translated into English is Hisoyaka na kesshō (密やかな結晶), literally rendered in the French title, Cristallisation secrète. The Orwellian English title creates expectations that this will be a political novel, whereas in fact it is something far more elusive and subtle. First published in 1994, The Memory Police is now offered in translation by Stephen Snyder, the seventh of Ogawa’s novels and short story collections to appear in English. This is only a fraction of her full playlist: since When a Butterfly is Broken (Agehachō ga kowareru toki, 揚羽蝶が壊れる時), which took the Kaien Prize in 1988, Ogawa has published a book or two almost every year and won a range of major literary awards, including the Akutagawa in 1990, confirming her place in the pantheon of contemporary J-lit.

Anglophones were introduced to Ogawa by a short story published in the New Yorker in 2004. In what Snyder refers to as his ongoing ‘ethnography’ of the publishing industry, particularly the selection and commodification of non-Anglophone writers in translation, he describes the ‘discovery of’ Murakami Haruki by then New Yorker editor Robert Gottlieb in the early 1990s as the first step in Murakami’s apotheosis as an international phenomenon. Snyder mentions the pressure on J-E literary translators to reveal ‘the next Murakami’ and suggests that Gottlieb’s successor, Deborah Treisman, ‘discovered’ Ogawa to develop ‘her own global Japanese New Yorker writer’.[1] A seemingly odd choice: as a writer, Ogawa is nothing like Murakami. She does not write about apathetic (yet irresistible to women) 30-something men and jazz bars, and there is nothing in Ogawa’s work that suggests she aspires to the global cultural ‘cool’ embodied by Murakami. Compared to Murakami’s signature urban magical-realism, Ogawa’s world is dark and surreal, sometimes sexually explicit and violent (The Hotel Iris). ‘Quirky’ suggests levity, and there is none of that in The Memory Police.

The novel takes place on an unnamed island where, for the past 15 years, things have regularly disappeared, not just physically but from memory. This disappearance is enforced by the Memory Police, the only manifestation of authority. The narrator, a writer, also unnamed, is told by her artist mother as a child that ‘things go on disappearing, one by one’, but is reassured that it ‘doesn’t hurt’: ‘One morning you’ll simply wake up and it will be over, before you’ve even realised … you’ll feel that something has changed from the night before, and you’ll know you have lost something, that something has disappeared from the island’ (p. 3). The islanders simply acquiesce to these disappearances, quickly forgetting. When birds are ‘disappeared’ at the beginning of the novel, the narrator notices a ‘small brown creature’ flying overhead, which almost triggers a memory of her father, an ornithologist, but instead she comes up against a mental void: ‘I realised that everything I knew about [these creatures] had disappeared from inside me: my memories of them, my feelings about them, the very meaning of the word “bird” – everything’ (p. 10). Her attempts to hold onto her fleeting memories are futile, her mind wiped like a hard drive attacked by a malignant computer virus. In the market that afternoon, she sees people freeing their pet birds from cages, dazed but compliant. It is impossible to grieve for what cannot be remembered, and the islanders soon get on with their increasingly minimised lives.

There are a few exceptions, however: people whose memories persist, among them the narrator’s mother, who is already dead when the novel opens, and the narrator’s editor, known only as R. As more people are taken away by the Memory Police, the narrator decides to hide R., whose memories put him in danger. (Ogawa has referred in interviews to her childhood fascination with the diary of Anne Frank and the preparation to make the hidden cupboard habitable is described in some detail.) In return for being hidden, he attempts to restore her memories by showing her items that have already been ‘disappeared’—a ferry ticket, a music box—and sharing his own memories, but even the discovery of old objects hidden by the writer’s mother inside her sculptures fail to summon anything more than a dim recall: ‘The swamp of my memory was shallow and still’ (p. 230).

Parallel to the main narrative is the protagonist’s own novel-in-progress, which begins as a romance between a female typing student, who attends classes in the bell-tower of a church, and her typing teacher. One day, her typewriter breaks, and her teacher invites her up to the top room, behind the clock face, where he carries out repairs. She finds she is unable to speak; her voice is now trapped inside her broken machine and the student herself is trapped inside the bell-tower.

When novels disappear, thus depriving the writer of her livelihood, she gets a job in a spice shop. R. takes her manuscript into safekeeping in the secret room and encourages her to continue, but she can barely manage to write the letters of the alphabet. Struggling, she manages to finish her novel for R’s sake. Treated like a doll by her teacher, stripped and washed and dressed up in bizarre outfits, the imprisoned student becomes so helpless that she is unable to cry out when another student comes knocking on the door. Her captor mocks her: ‘You’ve already been absorbed into this room.’ When he lures another young woman up to the bell tower, with another broken typewriter, the student is completely erased, prefiguring the writer’s own erasure.

Throughout the book, other things disappear—roses, photographs, fruit—but there is no protest, no questioning, and no explanation of what power the Memory Police represent. Since maps have ‘disappeared’, nobody knows the full extent of the island or what lies beyond. There is mention of a successful escape from the island by boat, even though boats ‘disappeared’ years ago; someone had retained a memory of boats and was able to repair and sail one (p. 114). Hearing about this escape, the narrator cannot quite imagine how these people crossed the water, so completely has the concept of a boat been expunged from her mind. Otherwise, the islanders submit to their fate, even as, towards the end, they start to disappear themselves, body part by body part.

Like the protagonist of her novel, the writer becomes increasingly disembodied, despite R.’s attempts to revive the disappeared parts of her body as well as her memory: ‘One after another, he tossed pebbles into the swamp of my mind, but instead of coming to rest on the bottom, they continued to drift deeper and deeper down, without end’ (p. 270). Eventually, her body becomes merely one of the ‘disappeared’ objects hoarded in R.’s secret room. He is left with her memory, denied the solace of forgetting.

Read as a political allegory, the novel is frustrating. It demands a more subtle approach. As a disturbing fable about the importance of memory, which forms us, and the tragedy of its loss, and how those who insist on remembering—or who are unable to forget—in the face of general amnesia become outcasts, the novel has a melancholy power. Admirers of Ogawa’s work will find much to like in this latest translation. More literal readers may simply find it baffling and bleak.