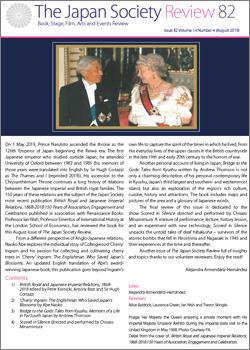 On 1 May 2019, Prince Naruhito ascended the throne as the 126th Emperor of Japan beginning the Reiwa era. The first Japanese emperor who studied outside Japan, he attended University of Oxford between 1983 and 1985 (his memoirs of those years were translated into English by Sir Hugh Cortazzi as The Thames and I (reprinted 2019)). His ascension to the Chrysanthemum Throne continues a long history of relations between the Japanese imperial and British royal families.

The 150 years of these relations are the subject of the Japan Society most recent publication British Royal and Japanese Imperial Relations, 1868-2018:150 Years of Association, Engagement and Celebration published in association with Renaissance Books. Professor Ian Nish, Professor Emeritus of International History at the London School of Economics, has reviewed the book for this August issue of The Japan Society Review.

From a different perspective of Anglo-Japanese relations, Naoko Abe explores the individual story of Collingwood ‘Cherry’ Ingram and his passion for collecting and cultivating cherry trees in ‘Cherry’ Ingram: The Englishman Who Saved Japan’s Blossoms. An updated English translation of Abe’s award-winning Japanese book, this publication goes beyond Ingram’s own life to capture the spirit of the times in which he lived, from the everyday lives of the upper classes in the British countryside in the late 19th and early 20th century to the horrors of war.

Another personal account of living in Japan, Bridge to the Gods: Tales from Kyushu written by Andrew Thomson is not only a charming description of his personal contemporary life in Kyushu, Japan’s third largest and southern- and westernmost island, but also an exploration of the region’s rich culture, cuisine, history and attractions. The book includes maps and pictures of the area and a glossary of Japanese words.

The final review of this issue is dedicated to the show Scored in Silence directed and performed by Chisato Minamimura. A mixture of performance, lecture, history lesson, and an experiment with new technology, Scored in Silence unpacks the untold tales of deaf hibakusha – survivors of the atomic bombs that fell in Hiroshima and Nagasaki in 1945 and their experiences at the time and thereafter.

Another issue of The Japan Society Review full of insights and topics thanks to our volunteer reviewers. Enjoy the read!