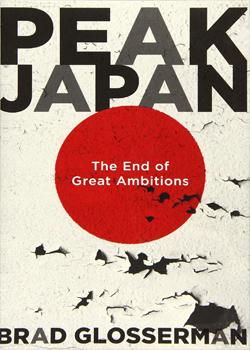 Crises are often catalysts for change. The recession which will inevitably follow the COVID-19 pandemic, as well as the postponement or even the cancellation of the Olympics Games presents a moment of truth for Japan. Surely now is the perfect opportunity to embrace reform and challenge the complacency which has stymied progress for the past thirty years? Prime Minister Abe Shinzo asserted in a 2013 speech that 'Japan is not, and will never be, a tier-two country'. So what can it now do to assert this bold ambition for premier status?

No matter how passionately such ambition is stated, the words are usually empty, according to Brad Glosserman. His book Peak Japan: The End of Great Ambitions went into print in 2019, before the coronavirus pandemic. As I turned the pages of in the summer of 2020, I wondered if the reaction to the coronavirus crisis will be any different to responses to previous disasters, such as the 2011 Great East Japan Earthquake. If the historical precedent cited by Professor Glosserman is followed, this would appear unlikely. Glosserman is frustrated that no matter how serious Japan’s problems, they do not provide the impetus for social transformation. Shocks trigger a temporary sense of alarm but 'this is not sufficient to move Japanese people out of their comfort zone and to change the direction from business as usual' (p. 5).

Professor Glosserman is an American scholar and, in my view, retains a high regard for free market capitalism, strong alliances between liberal democracies and a business environment which fosters innovation and entrepreneurship. He also understands Japan deeply, having been a resident and regular visitor since 1991. He worked as a journalist for the Japan Times and as an analyst for a think tank called the Pacific Forum. His book is thoroughly researched and engaging.

Rather than finger pointing, he makes a special effort to explain how the Japanese interpret their national dilemma and how they proffer solutions. Occasionally, there are charming suggestions. The novelist Shimazai Tomaki expresses a wish to see the government establish a network of neighbourhood cafes, where people could go to get to know one another 'even if they don’t necessarily chat or become close friends, although it would obviously be great if they did' (p. 159).

Fun ideas such as chat cafes are rare, for this is a serious book which records a mood which is predominantly gloomy. Glosserman cites numerous opinion polls which suggest that for much of the time since the bubble economy burst in the 1990s, Japanese people have been dissatisfied with their country’s political and economic performance. The frustration is acknowledged by both the left and right. This book contains many interviews with people who long for reform but who are dismayed that so many bold plans for action end up going nowhere.

The author provides a striking example from the turn of the millennium, when Prime Minister Obuchi Keizo established a commission on Japan's Goals for the 21st Century. Committees made up of academics, journalists and policy specialists from across the political spectrum shared ideas. Their report stated that in the year 2000, Japan stood at a turning point in its history, as significant as the Meiji Restoration and its defeat in World War II. The experts concluded that there was an urgent need to redefine the social contract between individuals and society. They even offered many specific and practical suggestions on how to do this, few of which were followed.

Despite the good intentions, Professor Glosserman claims that by the early 2000s, there was 'a rapid exacerbation of private suffering directly related to economic hardship' (p. 19) in Japan, including record rates of unemployment, homelessness, child abuse and suicide. Further traumas have followed since then.

We are left with a puzzle. As the author notes, Japan is a country which has repeatedly proven able to rise to challenges and overcome them. So why does it struggle to deal with what seem to be relatively minor problems, such as ending deflation or stemming the decline in the birth rate?

The book’s author takes the view that part of the difficulty is that changes advocated from the top take ages to implement, or never catch on at all. The so-called third arrow of Abenomics is a classic example of this: a shot at reform which appears to have missed its target. Professor Glosserman notes that under Japan’s political system, prime ministers have limited ability to set the legislative agenda, so their plans often fail to make it through fractious parliamentary committees, or are deliberately obstructed by a self-serving bureaucracy. The author warns that Abe Shinzo’s current term in office is 'a last gasp' which will be 'frustrated by a combination of structural restraints and attitudinal barriers' (p. 236).

Professor Glosserman sees a country 'with a relative dearth of entrepreneurial activity, especially among the young' (p. 221). He implies that the majority of Japanese young people are complacent and compare unfavourably to the dynamic Chinese. In evidence, he offers the words of a Kyoto University student who told him: 'We are happy and comfortable. We can sleep on trains and no one will steal our money. We don’t feel a sense of urgency or pain and so we are not desperate to try something new' (p. 231).

The debate about reform, rebirth and rejuvenation continues. For example, the Nikkei Asian Review ran an op-ed on April 30th 2020 under the headline 'Coronavirus gives Japan Inc [the] push it needs for radical reform'. In it, the writer Jochen Legewie – Tokyo partner and Asia Chairman of strategic communications consultancy Kekst CNC – claimed that as a result of the coronavirus crisis, 'transformation and restructuring are sure to take place at a level many cannot yet imagine' and added that 'this change will be most profound in Japan'.

The Nikkei piece noted that previous external shocks have not prompted long-lasting change. That suggests to me that Professor Glosserman is probably right to conclude that most Japanese citizens lack a passion for the urgent reforms to match their leaders’ great ambitions.