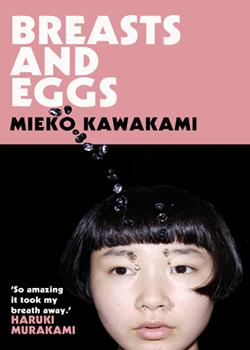 Kawakami Mieko's epic novel zooms in on the experience of women, in particular working-class women from Osaka - the kind whose voices are not heard. Makiko, the family head, is a single mother who makes ends meet by working long hours as a hostess in a bar in Osaka. Natsuko, her younger sister by nine years, moved to Tokyo aged 20 to blog and write, and 12-year-old Midoriko is Makiko's only child.

Midoriko's outlook, largely informed by her mother's testing life, is initially only gleaned from her diary entries which include weary realisations such as, ‘Life is hard enough with just one body, why would anyone ever want to make another one?’ Finding the overpopulation of the world to be totally irresponsible she brands being child free as a positive, responsible action, and declares she will never have children. Kawakami uses her as a powerful voice, representing a generation critical – contemptuous even – of their elders.

The novel begins in 2008, ten years on from Natsuko's move to Tokyo. Book one shines a light on the history and sometimes tense relationships between Natsuko, Makiko and Midoriko. References to the Beijing Olympics of 2008, the 2011 earthquake and tsunami which devastated Northeast Japan, and the election of President Trump help the reader pinpoint the novel in time.

While book one focuses on ageing Makiko’s preoccupation with breasts, and culminates in Makiko, Midoriko and Natsuko briefly reuniting in Tokyo, book two - considerably longer - focuses on Natsuko's own dilemmas and the trauma of life. Beginning in 2014, it brings us right up to 2019 when Natsuko is in her early 40s.

Natsuko's life is a one of rumination. She shares her struggles, as well as her wide-ranging and random everyday thoughts with the reader. The novel showcases Natsuko's often very funny, free associations running riot, as well as affecting stories from her childhood. The latter allow a glimpse into the poverty experienced by the sisters - which may surprise those unfamiliar with this aspect of contemporary Japan.

Natsuko's life in Tokyo sounds like a real grind, yet at the same time she can't believe her luck, wondering in disbelief, ‘How did I wind up getting paid to read and write?’ But will she regret not having a baby?

There is a melancholy beauty at the root of Kawakami's discourse on life and more than a few signals to suggest autobiographical elements. Hers is an unvarnished take on domestic life, presenting it as generally miserable, dangerous or steeped in poverty.  Though not confined to women, Kawakami's empathy is overwhelmingly with her female characters. It is no surprise that she has become a feminist icon in Japan.

The novel is hefty, full of asides, digressions and embellishments, and nimbly experiments with a variety of different styles. It uses Osaka-ben and a chatty style bold, teeming with intimate, sometimes outrageous, never prude conversations between women. Often raw, on occasion the narrative swings into realistic streams of consciousness and film or dream sequences. One memorable scene in the hot baths, unfolds into a dreamscape masterfully echoing, I thought, Sawa Hiraki's fantasy-filled videos.

With difficulty I forced myself to pause before reading the last chapter, as I dared hope that the novel might end on a promising note. While not a conventionally happy ending, it is positive in that Natsuko remains undeterred in living a good life and one directed by herself. What a wonderful message to end on, and what a generous yet often sad book it is.