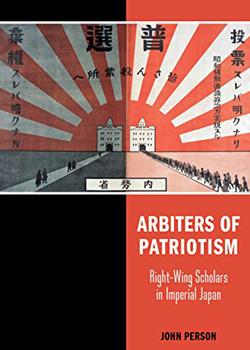 Person’s Arbiters of Patriotism begins with a very important question:  ‘how do we think about fanatics in history?’ (p. 1). This is indeed a very interesting and fundamental question which opens up a much wider debate about the role of the intellectual in the society and their relation to the actual centre of power, the state. Arguably, in fact, what this question really asks is, who gets to decide who is a fanatic and who is a patriot? In order to address these issues Person effectively writes two, tightly interlocked, biographical accounts of Minoda Muneki (1894–1946) and Mitsui Koshi (1883–1953). Minoda and Mitsui were two of the many “irrational fanatics” that populated Japanese public opinion in the early part of the Showa Era (1926-1989). Mitsui was a well-known contributor to and editor of many Japanese conservative publications. He was the mentor of Minoda and together they founded the Genri Nippon Society and its eponymous magazine, which became the centres of anti-patriotic bullying and Japanist propaganda.

This book is not only Person’s first monograph, but it is also the first book in English to extensively write about the lives of Minoda and Mitsui.

The first section of the book focuses on Mitsui’s life and his emergence as a leading right-wing intellectual. In Chapter 1, Person explores the intellectual evolution on Mitsui’s theory of poetry (the “Shikishima Way”) from one focused upon the ‘primacy of the expressive individual’ to a jingoistic theory of ‘ethnonational sentimentalism’ which idealised the Emperor Meiji’s poems as sort of holy scriptures (p. 40). Furthermore, this chapter is also an exploration of the discourses of “Japanisms” since the Meiji period, showing how these ideas mutated along with the changes within the Japanese state and its position in the international system (p. 31).

Chapter 2 looks at the Taisho years as a crucial moment for the formation of both Mitsui and Minoda (p. 42). Key to this chapter is the idea of the “Taisho Restoration” which is explored to uncover the intersections between nationalistic ideologies and the rise of mass politics. Especially in the works of Mitsui, in fact, one can notice the incorporation of some democratic ideas (male universal suffrage and the right to demonstrate), but only as a mean to unify the country against the corruption of the government (p. 55).

At the same time, the author shows how a political taxonomy with quasi-distinct ideas of left and right developed. Most importantly, the government emerged as the conspicuous centre actively defining the position of others on the political spectrum.

The second section of the book focuses on the more famous figure of Minoda. Chapter 3 explores two main issues. First, the chapter traces the transitional character of both left and right discourses, showing how Marxist theories developed alongside anti-Marxist ones. Interestingly, Person points out that despite differences, intellectuals on both sides tried to wrestle with the formulation of a ‘nondeterministic theory of historical change’ centred upon the agency of the individual (p. 66). Second, it tries to problematise the image of Japanism as being one with the Japanese state. Person in fact demonstrates how the influence of Minoda’s arguments over other nationalist discourses and upon public and academic circles came as a result of Minoda’s alignment with the government’s social engineering efforts (p. 77). This relationship however was never idyllic, since even Minoda soon became a target of the political surveillance and scrutiny that he was advocating for the Left.

Chapter 4 discusses the most famous example of Minoda’s power, the Imperial Organ Theory Incident of 1935, which established him as the key Japanist voice of his time. However, Person does not approach the topic only from the usual perspective of the fall of liberalism in Japan. Rather, he shows how the simultaneous rise of far-right terrorism transformed the government’s approach to Minoda and the Right Wing, which came under strict police surveillance using the same tactics developed against the Left in the 1920s. From this perspective, what is interesting is actually to see how the police viewed some associations behind the public smear campaigns as the more pressing security threat (p. 113) than professor Minobe Tatsukuchi’s (1873-1948) theories.

The fifth and final chapter traces the increasing intellectual irrelevancy of Japanism, which lost ground against technocratic and Pan-Asianist discourses, and the ultimate demise of the Genri Nippon. The government shifted once again Minoda’s positions to the unwelcomed part of the Right Wing, so much so that later critics of the wartime regime were soon isolated and arrested.

Arguably, this book might have been theoretically too cautious. Parson writes that  ‘the Japanism of the Genri Nippon Society was one manifestation of the ideologies of fascism in Japan’ (p. 10). However, it might be argued that Japanism was only one of the many strands of right-wing political discourses circulating across pre-war Japan, which included such ideologies as Fascism, Nazism, Pan-Asianism and so on and so forth.[1] To articulate Japanism as a form of Fascism could be too reductive. Perhaps this study might have benefitted from a more decisive rupture with the idea of Fascism as a category defining the ideology of an entire era, and a more systematic theorisation of Japanism as a specific discourse. Of course, this would not deter from establishing similarities and differences between the two discourses.

Ultimately, Person’s Arbiters of Patriotism is a welcome contribution to the historiography of the Japanese Right. Person’s historical analysis of the idea of the “Right Wing” reveals a much more complex and multifaceted history that would have been lost by just assuming the transhistorical value of the term. Perhaps the most interesting thing about the book, however, is how it shows the power of the state as the actual centre of all political conversations. While one might be tempted to assume that the people like Minoda and Mitsui were the judges of who was patriotic and who was not, Person’s convincingly demonstrates that the government and its organs were the actual arbiters of patriotism.