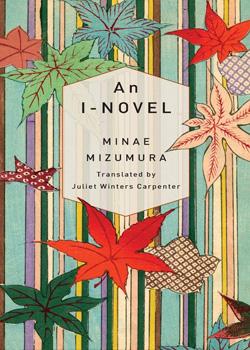 ‘I don't especially want to be an American, and you always wanted to stay Japanese much more than I did... In any case, you and I can never be Americans. We'll only be Japanese Americans... Or Asian Americans’.

It is this negotiation between two ideas of nationhood, two concepts of ‘belonging’ - encompassing both language and identity - that lies at the heart of Mizumura Minae’s An I-Novel. It is the book’s full title, as presented in its Japanese original - An I-Novel from Left to Right - that reveals the conceptual framework at the heart of the piece. Unlike most Japanese novels, which are written from top-to-bottom, and right-to-left, Mizumura’s semi-autobiographical piece, first published in Japan in 1995, instead reads from left-to-right, and blends Japanese script together with the English language, sometimes alternating even within the same sentence.

This, of course, presents an obvious challenge for the translator, but it is to Juliet Winters Carpenter’s credit that this wholly English incarnation - where the ‘original’ English interjections are instead presented in bold typeface - maintains a remarkable consistency of tone throughout; seamless to the point of perfection. While the reading experience is of course transformed, and one might imagine never quite achieves the impact of a bilingual reader alternating between Japanese and English, the bold segments have a remarkable effect of ventriloquising the speech of the characters they represent. This lends the book, for much of its length, a striking Americanism - so much so that it often ceases to feel like Japanese literature. How much of this is Carpenter’s remarkable translation and how much is present in Mizumura’s original is hard to detect - but it all adds to a wholly encompassing force of personality that warms you to the narrator with every passing page.

And what a narrative voice this novel packs. Ostensibly told over the course of a single day, we are presented the thoughts and communications of Mizumura’s self-insert narrator Minae - a bookish Ivy League PhD student on the verge of completing her final oral examinations -  as she converses with her sister Nanae - an aspiring artist - over the phone. The passage of time becomes elusive as we dip back into memories of the sisters’ childhood; brought from Japan to New York in their teens due to their father’s job transfer, they by necessity must quickly learn how to fit into an American high school education - an experience encompassing not just the obvious learning of a new language, but also a whole way of being, of inhabiting, a nation so different in custom and manner from their own.

Set as it is in the peak years of Japan’s economic boom - the bubble years of the 1980s in which the country’s economy saw it reigning supreme as part of a new global re-ordering of monetary power - many of the novel’s most fascinating, amusing insights spin from the Mizumura family’s status as part of Japan’s wealthy elite translocated as expats to America. Here, their middle-to-upper class values must be negotiated as part of communities not quite sure how to place them - a world in which the status of migrancy and wealth still seem very much mutually exclusive. In conversations with their mother, the topic inevitably turns to marriage - or more specifically, marrying ‘well’. Here, above all, money dominates. Elsewhere, they observe a Manhattan wracked by crime, homelessness and crumbling buildings. A fancy restaurant they visit in its midst seems like a paradisal oasis in comparison. More widely, we are shown a world on the cusp of change - as Minae’s account draws closer to the present day, she notes how chopsticks, once a curiously alien concept to most Americans, are already becoming a common, innocuous part of the background.

Their domineering mother becomes symbolic of a generation of parent-child relationships amongst Asian expatriates in America; enrolling the two daughters in a gruelling regime of ballet and piano lessons. As the book notes bitingly at one point, speaking for all those whose youth resembled this experience; ‘their mothers are living out their dreams through them’. The novel’s obsession with class, while perhaps never overtly held up as a central theme as readily as language or race is, leads the book in moments to feel like a kind of 1980s Japanese take on E. M. Forster’s Howards End. Hung as it is around the lives of two sisters - one scholarly and pensive, the other spirited and idealistic - the book’s own dismantling of what it means to ‘connect’ in a foreign language and culture is so entrancing because its status as a thing of halves - both Japanese and American/English - allows it ultimately to speak to all with a singular clarity. This is the collective wisdom of two sisters who have inhabited both the physical and mental space of both nations responsible for forming who they are today, and as such can - with a withering eye for accuracy - nail home the merits and demerits of each.

The book’s conclusion ultimately brings us full-circle, returning us to much of the imagery and snatches of lyricism presented in the opening pages. As the last of Minae’s phone calls to her sister concludes and she comes to ponder again her choice to return to Japan after finishing her PhD, we are tipped once again into the book’s most ‘literary’ moments. These sections - bookending the flashbacks that make up much of its middle movement - are arguably the densest, most heavy-going of the novel. Emotionally charged, they lack some of the breezy simplicity that characterise Minae’s recollections of her youth, but in hindsight offer a kind of catharsis - it is only in understanding the journey that Minae has taken to reach this point that the sheer need for her to write, to express herself in the written format and become a novelist, really hits us right in the heart.

An I-Novel is not the first of Mizumura’s works to be released in English. A number of her other books - all also translated by Carpenter - have been previously released; chief among them A True Novel and Inheritance From Mother. In some ways, it is easy to imagine An I-Novel falling into the same easy space of quiet acclaim - cherished amongst fans, scholars and students of Japanese Literature and becoming a foundational text for future study. But truth be told, despite this new translated edition coming from an academic publisher, such is the exceptional quality of the prose, the easy confidence in which it lures in the reader, it really owes itself to broadening its audience beyond the readily converted. Just as contemporary female voices in Japanese literature such as Kawakami Mieko have slowly but steadily blazed a trail for impassioned literary encapsulations of womanhood, breaking down the walls between languages via concerted word of mouth, so too does the time feel right for Mizumura’s extraordinary writing to strike home with the wider reading public.