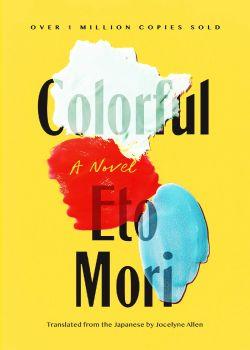 What if a suicide victim came back to life, but their mind was inhabited by someone else? Resurrected by way of a chance lottery conducted by a mysterious angel, a formless soul finds itself implanted into the body of fourteen-year-old school kid Kobayashi Makoto, who has just committed suicide. Given a second chance at life, the soul - who remembers nothing of its former life - must now live through Makoto’s eyes, through his body, coming to terms with a family who thought they’d lost him. This revived version of Makoto is, in essence, given the chance to play life by a new set of rules, and thus we are presented with a striking spin on the kind of ‘high-concept’ narrative gambit that has inspired decades’ worth of iconic stories, from the likes of Hollywood classic It’s A Wonderful Life right on through to Kore-eda Hirokazu’s After Life or the body-swapping antics of Shinkai Makoto’s Your Name.

Originally released in 1998 in Japan, Mori Eto’s Colorful - presented now for the first time in an English translation by Jocelyne Allen - will be familiar to many readers through Hara Keiichi’s animated adaptation from 2010. Hara’s film, released a full five years before the director would come to wider fame with the critically acclaimed Miss Hokusai, has long been considered an underrated gem amongst anime fans, and as such, the chance to read the original source material for Colorful presents an interesting opportunity to partake of a novel that has sold over a million copies to date in Japan. Indeed, despite being over twenty years old, Colorful holds its own very well as part of a recent new wave of similarly mainstream Japanese fiction that has proved exceptionally popular in English translation; most notably Kawaguchi Toshikazu’s Before the Coffee Gets Cold and Kawamura Genki’s If Cats Disappeared from the World.

Like those novels, Colorful’s core premise revolves around the powerful conceit of the “do over”. Given another chance, what would you change? Or more precisely, how would you change? Initially, the newly ‘reborn’ Makoto’s interactions with his family seem destined to failure, and he begins to ponder why the teenager might have felt compelled to take his own life in the first place. Caught between a snooty brother, a workaholic father plugging in the overtime hours at a company plagued by scandal, and a mother who is having an affair with her flamenco instructor, Makoto feels trapped in what he sees as a ‘viper’s nest’, and finds his only solace in his school’s art club, where he proves to be a surprisingly accomplished painter.

At school, we are introduced to the scant few students that pay more than a cursory interest in the insular, brooding teen. Hiroka - in the year below him - is Makoto's dream girl, but she is also, in his own words, a 'cherubic prostitute'. In what stands as one of the novel’s most shocking moments, Makoto learns that Hiroka is visiting love hotels to have sex with a middle-aged man in exchange for money. Confronted by Makoto, she then offers to have sex with him too, at a reduced rate of 20,000 Yen. Makoto declines, but is left shaken by her extreme moral apathy; the bleakness of a world in which a teen girl would trade her body for money with a man three times her age, all because - as Hiroka readily admits - she cannot be bothered to wait until adulthood to be able to afford the expensive clothes and jewellery she wants in the here and now.

Colorful is, for the vast bulk of its duration, not a happy book. It sinks the reader to the lowest depths of the human condition and rubs their face in it. For many readers, the teen protagonist, school setting and plainly written, casual style will be impossible to reconcile with the darkness and depravity of the novel's proceedings. And yet, just as the narrative threatens to overwhelm, it transitions effortlessly into an uplifting resolution when Makoto’s rarely-seen Dad takes him on a fishing trip for some quality father-son bonding time. Here, it finally dawns on Makoto that his gloomy perspective of the world, and the people around him, may not necessarily be correct. Could it be that they actually care deeply about him, and would have been mortified if his suicide attempt had really been successful? As the book moves toward its conclusion - including a largely unsurprising plot twist regarding the identity of the soul inhabiting Makoto’s body - Colorful takes on an increasingly moralistic, didactic tone as it lays out what we might reasonably take as its core, central message: 'anyone and everyone in this terrible world was broken in their own way', but that in realising this is quite normal, we find the strength to persevere and mend the cracks.

Colorful is an intense, powerful, often chokingly bitter clarion call to teenage hearts tearing themselves to pieces. At times, it feels like it is teetering on a dangerous verge in which it might almost be wallowing unnecessarily in the grimness of its fractured protagonists. At other moments, it offers such genuine, heartfelt poignancy and wisdom that it really does begin to feel like it could be that “moment” of change, the impetus for those facing their own worries to look toward better futures. Colorful’s success - in its native Japan and around the world, and in both its book and film incarnations - is proof enough of its ability to speak to the deepest recesses of the human soul. In a fascinating afterword from author Mori Eto herself, she talks about how it was precisely this desire to impart change that motivated her to write about such a serious subject in the manner in which she did. Enheartened by readers who approached her to say they had reconsidered thoughts of suicide after finishing the book, or by parents for whom the book had seen their children emerge from prolonged bedroom reclusivity, Mori and her writing stand as a powerful case study in capturing very real social issues through a fantastical slant.