Lonely Castle in the Mirror 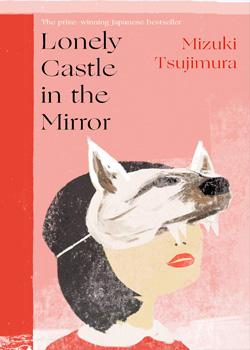 Kagami no Koji, an innovative and tender blend of social commentary and magical realism, is a prizewinning novel by Tsujimura Mizuki published in 2017, with the English translation by Philip Gabriel, titled Lonely Castle in the Mirror, published in 2021.

The story starts off like other fantasy novels. Instead of stumbling through the wardrobe to find Narnia, or falling down the rabbit hole to find Wonderland, seven children wake up one morning to find their mirrors glowing, and upon putting their hand against the glass, they are pulled through to find a castle guarded by a wolf and the Wolf Queen. They are set a task: they have a year to search for the key to the wishing room, and whoever finds it will be granted a single wish.

The seven children brought to the castle have stopped attending school, having suffered some sort of trauma in their family or among their peers, and so, they are home to notice their mirrors glowing at 9am – the start of the school day. They learn that the castle is open for the duration of the academic year, and only during school hours, and they are free to come and go as they please within this time.

In this way, Tsujimura introduces us the social issue of futoko: children who stop going to school for extended periods of time, reasons for which are often reported as family circumstances or bullying. Tsujimura reveals seven diverse stories of futoko, thus presenting the people behind this phenomenon, giving depth and dimension to the issue. Empathising with teachers, parents, friends, and bullies themselves, she ponders why children would drop out of school, and explores the isolation which can colour and define people’s lives from a young age. Given the problem of bullying in Japan, and associated public health issues among young people including suicide and hikikomori, the book’s popularity should come as no surprise, winning the Japan Booksellers’ Award in 2018.

The story unfolds through 12-year-old Kokoro’s eyes. Having suffered a traumatic experience at school which led to her hiding in her house, fearing for her life while her bullies shouted and bashed on her door, Kokoro withdraws into herself, and finds herself unable to communicate with her parents and teachers. She becomes increasingly isolated from the world around her.

To Kokoro, it quickly becomes clear that each of the other children have a similar experience, but all appear reluctant to divulge their story. It is clear, though, that the castle – unlike other fantasy worlds – is a safe haven for the children, offering respite from the traumas of the outside world. They are given physical space, with each child having their own private room, as well as communal rooms for the group to congregate; and time, every school day for a whole year, to explore friendships, build connections, and slowly process their trauma.

Matching these themes of human connection and isolation, the pace of the book is appropriately slow and measured. Tension builds gradually, with hints of what is to come dropped close to the start and resolved only at the end. Apart from ominous howling that grows louder as 5pm approaches, and the knowledge that if they stay past this time, the wolf will come and eat whole whoever is left, there is no dramatic plot line. Instead, we are given space to observe how the children form connections, resolve difficulties, communicate, and navigate the complexities of friendship. We see, through detailed accounts, shy exchanges of gifts, unreciprocated confessions of love, fights unfold and resolve, and birthday celebrations.

It is relevant that these social dynamics are not mediated by an adult. Outside the castle, beyond the mirror and in the real world, we see the children battle with the control and parameters inflicted on them by teachers, school systems and parents. But through the mirror and in the castle, they have freedom to live as they please, form connections with one another, and confront their anxieties and fears in their own time.

Despite the dark themes underlying the book, and visceral fear felt by the children in their respective real-world experiences, written from Kokoro’s viewpoint – a child’s perspective – the tone remains optimistic and hopeful. There is the sense that without support from friends, family and peers, and without apt processing of their experiences, the children could suffer later on in life: as well as the trauma of the bullying, the children express guilt for dropping out of school and missing classes, and worry they are letting down their parents. Some withdraw in total isolation and fear leaving their house entirely, while others rebel by dying their hair and getting into relationships. But from their stay in the castle, the children are given the space to learn and slowly heal. We see, in what feels like real time given the pace of the book, the importance of patience, trust, and time in healing, and of granting children autonomy in how they choose to process trauma.

And, as they are given space in the castle to be free from fear, on the outside, in the “real” world, they grow too; empathising teachers and parents come to speak to the children, who give them space as they try to recover; and we are introduced to the School, an alternative school for children who’ve dropped out of mainstream school, drawing parallels with free schools, which emerged in Japan in the 1980s in response to increasing truancy.

Lonely Castle in the Mirror – its success in Japan and beyond – perhaps points to a broader trend in increasing awareness of children’s mental health, with bullying also the topic of Kawakami Mieko’s highly anticipated Heaven, translated in 2021. Tsujimura, using fantasy and magical realism to amplify historical and current trends, commentary and research in bullying and mental health – adds hope and depth to the conversation.