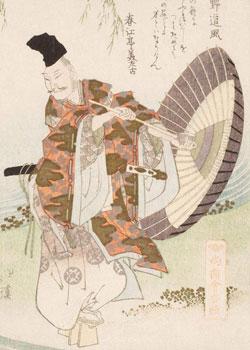 By Hanaoka Kiyoko and Clare Pollard

The Ashmolean Museum in Oxford is home to a number of beautifully printed, well preserved surimono prints from the Edo period (1603-1868). While they often depicted images of popular culture, scenes from well-known literature, or figures from traditional Japanese legends, they were not produced for mass consumption; rather, they were privately commissioned by wealthy patrons or a part of a limited edition (of about 50 to 500). Given their purpose and audience, surimono were often made with the finest materials, and artists’ portrayed every aspect of the design in painstaking detail.

The vibrant imagery and lush colors have long made these prints desirable among collectors in the West, their visual appeal often superseding their informational value within the world of commercial art. However, by taking this approach surimono, like ukiyo-e, have often been framed as art historical objects as opposed to a visual framing device for rich literary resources (for those who are unfamiliar with Japanese print culture, it may be helpful to think of it like a western picture book). Plum Blossom & Green Willow: Japanese surimono prints from the Ashmolean Museum, the catalogue of an exhibition held at the museum in 2019, discusses the relationship of text and image at length, and frames the development of surimono within the context of 19th century Japanese literati communities and Edo period material culture.

The collection of surimono in the Ashmolean museum was developed in the 20th century, a majority of the objects donated by the founders of the Spalding Trust, an organization dedicated to promoting the study of transregional comparative religion. After providing and overview of the general purpose of the prints, and how the imagery relates to the poetry, the main body of this catalogue is split into seven categories: ‘Picture Calendars’, ‘Zodiac Animals’, ‘New Year’s Symbols and Activities’, ‘History, Legend and Literature’, ‘Kabuki’, ‘Still Lifes’, and ‘The Shijoo Style’ and “Haikai Surimono’. Each of these sections focus on the type of imagery featured and the reason they were commissioned, but always cognizant of how the artists/designers were deferential to the poems’ contents.

Within these categories, each featured surimono has two pages dedicated to it, most often one containing a photograph with object information, the other an in-depth catalogue entry. At first glance, it may seem like some of the prints could fall into several categories. For instance, even though one section of them is dedicated entirely to still lifes, others include still life surimono. It only becomes clear after reading several that the authors chose to organize the prints by the context clues (found in text and image) that suggest the general impetus for their being commissioned. So, to continue with the example of still lifes, one print entitled Still life with hair ornaments falls under ‘Picture Calendars’ because the cosmetics depicted and the accompanying poems all allude to how a woman would be done up for New Years festivities. It is not in ‘Still Lifes’ or ‘New Year’s Symbols and Activities’ because the references to major holidays or annual events are very subtle, and the covertness was characteristic of calendar pictures as they were strictly regulated (and in some cases, prohibited) by the ruling government.

A feature that makes Plum Blossom & Green Willow an excellent introduction into the subject of surimono, as well as a reference resource for one more well versed in Japanese literature or art history, are the detailed diagrams and lists of terms developed by the authors. Some effectively delineate how to “read” a print, delineating ways to identify seals, poems, signatures, and print titles. There are also in-depth descriptions of the different formats available with superimposed graphics to make clear how they could be folded or for scale reference to other images. They, in addition to key vocabulary and definitions, are largely placed in the introduction of the text (unlike many other catalogues of this nature, where they are in the back), so the reader is exposed to them early on, and can always refer back if they are unclear on this information when considering the entries about featured objects later on.

Unlike many art historical publications, the images and catalogue information (i.e. author, artist, date, etc.) featured in Plum Blossom & Green Willow are accompanied by the textual contents of the print, a transliteration from phonetic Japanese to English characters, as well as the English translation. By doing this, it forces the reader to engage with both the print’s design, and text, and reconsider their dynamic. For example, in the catalogue entry for the print featured on the cover, called Ono no Tofu, the author points out how the poems included make reference to the subjects claim to fame as the founder of Japanese style calligraphy (and later the subject of famous kabuki play Ono no Tofu aoyagi suzuri or The green willow ink stone of Ono no Tofu) through a variety of subtle poetic epithets and play on words. The authors walk the reader through the original text and its English counterpart, which would have likely been overlooked by non-Japanese speakers otherwise. Understanding this relationship also clarifies some of the designer’s choices in his or her portrayal of the subject, such as the script having the same brushstroke quality as the willow tree limbs that it is situated again, creating an intentional balance between text and image.

In short, Plum Blossom & Green Willow is a joy to read. The wealth of information is communicated clearly and effectively, and can be read easily by those with an academic background in the history of Japanese culture, art, and literature, as well as those who know very little about the subject. Interestingly, the ways the editors Hanaoka Kiyoko and Clare Pollard conveyed the key themes of the publication through innovative, strategic arrangement of text and image suggest they took a number from the surimono they studied.