An Affair with a Village 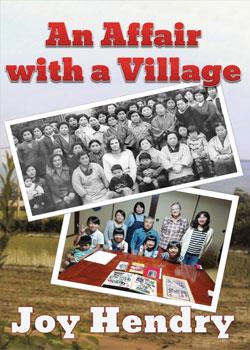 With more than four decades of research and at least eight books dedicated to Japan and its culture already under her belt, one would have been forgiven for thinking that legendary anthropologist Joy Hendry had run out of things to write on the subject. However, her latest offering, An Affair with a Village, proves such assumptions to be far from the truth.

This book is a heart-warming, funny, informative and highly personal love letter to Kurotsuchi, the small village in Fukuoka Prefecture, Kyushu that Hendry first visited in 1975 to undertake a year of fieldwork whilst during her time as a PhD student at Oxford University. In An Affair with a Village, Hendry documents her 45-year-long relationship with Kurotsuchi as if it were her lover: from the initial nerves and awkwardness to the heady honeymoon period, to the painful goodbyes and subsequently joyful reunions. Her personal experiences are interspersed with cultural, social, and religious background, giving a unique insight into Japanese marriage, funeral and birth rituals, along with some of the lesser-known and fascinating traditions of rural Japan, including the lengthy rituals attached to housebuilding and rice-harvesting. The wonderful colour photographs that accompany Hendry’s anecdotes are a charming bonus; by the end of the book, the reader will feel as though they know Kurotsuchi almost as intimately as Hendry does.

One of the main draws of this book is the unadulterated honesty with which it is written. Although Hendry’s affection for Kurotsuchi is clear -- she has returned to the village multiple times since completing her fieldwork, taking her own children with her, and has also hosted several friends from the village during their visits to the UK over the years -- she does not hold back when recounting her less enjoyable experiences there. Having to deal with initial resistance from some households when gathering data for a family tree chart project, being deliberately excluded from some of the villagers’ events, even experiencing a rather terrifying breaking-and-entering incident – Hendry’s time in Kurotsuchi was far from uneventful.

However, as is the case in any romantic relationship, the lows came with a multitude of highs: laughter, gifts, and lifelong friendships, just to name a few. Hendry’s close, enduring relationship with the Kumagai family, her neighbours during the initial year of fieldwork, is a particular highlight. The ebbs and flows of Hendry’s affair with Kurotsuchi are what makes the work so engaging, and her willingness to admit when things did not go to plan makes it a brilliant read for budding anthropologists in any country.

For any Japanologists who have read Hendry’s other, iconic, works, such as Marriage in Changing Japan (1981) and Wrapping Culture (1993), An Affair with a Village will be a fascinating behind-the-scenes look at the extensive work that went into her research. As Hendry explains in Chapters 7 and 8, much of her understanding of Japanese family traditions and domestic life was developed during sleepovers at the houses of numerous Kurotsuchi residents, and her famous insights into Japanese gift-giving culture were greatly inspired by the gifts that she gave and received during her time in the village. A re-reading of Hendry’s other books after finishing An Affair with a Village will no doubt make any student of Japanese society appreciate her findings in a new light.

Above all, however, An Affair with a Village is a rare and detailed look at a Japanese village that few will likely have the opportunity to visit. Located in the remote countryside of southern Kyushu, the Kurotsuchi that Hendry fell in love with represents what little remains of traditional, family-oriented rural Japan in the modern age. Hendry’s colourful descriptions and humorous personal accounts paint a vivid picture of what is clearly a beautiful part of the world and, if nothing else, the book provides some well-needed escapism at a time when many of us are craving a getaway.