Economic Reform in Japan: Can the Japanese Change? 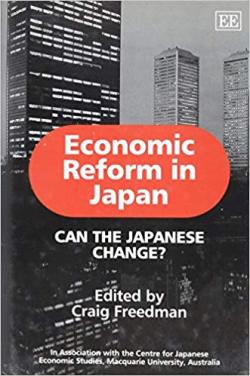 Nowadays everyone is asking if Japan can change. This conference volume, edited by Craig Freedman at Macquaire University in Australia, explores some answer to this question by featuring internationally renowned scholars and Japan specialists with diverse opinions.

Probably the most interesting part of this volume is Ronald Dore’s chapter, “Reform? The dubious benefits of marketisation” and Aiko Ikeo’s comment on Dore’s argument. In his chapter, Ronald Dore insists that we need to ask if Japan “should” change before asking if Japan “can” change, and that “one’s view of what aspects of Japanese society and economy ought to be changed will vary according to one’s political and social values.” This point is fully explained in his recent book, “Stock Market Capitalism: Welfare Capitalism – Japan and Germany versus the Anglo-Saxons”: Find it here

Aiko Ikeo at Waseda University is critical of Ronald Dore and says that Dore’s audience, while welcoming his argument, seems to have rather negative views on Japan these days. She points out that in reality Japan has been changing rapidly, especially as information technologies have been introduced “not only into the workplace but living rooms as well,” and concludes that “honestly speaking, I hope to see the Japanese continue to change.”

Another interesting chapter is Koichi Hamada’s, entitled “Can the Japanese change? Organizational, psychological and evolutionary perspectives,” where he distinguishes between changes in social institutions and those in people’s psychology and behavior, which are closely interrelated. Hamada heavily draws on Masahiko Aoki’s work on comparative institutional analysis, as fully explained by Aoki in his recent book, “Towards a Comparative Institutional Analysis”: Find it here

Hamada concludes that Japan “should try piecemeal changes if a systematic change is too difficult” in order to cope with a new environment with information technologies dominating in the service sector, especially in the banking, securities and insurance sectors. This seems to reflect the general sentiment of the Japanese public as well as a majority of the authors in this volume.

(1) When change is not reform: transforming the Japanese economy by Graig Freedman