Madmen in the Courtyard 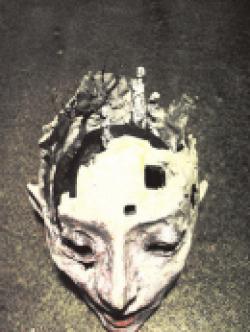 For anyone interested in modern Japanese theatre the energetic Mugensha Company’s innovative play Madmen in the Courtyard is a must. It imaginatively explores the link between existential philosophy and literacy lunacy from a uniquely Japanese perspective. Unlike many recent Japanese productions brought to the UK, this one is easily accessible to the non-Japanese speaker, using linking narration and other devices to explain the plot. While the unconventional mix of reality and the absurd will not necessarily appeal to everyone, it is certainly worth experiencing.

The action all takes place in a haunted courtyard, apparently set in contemporary Japan. A pantheon of Japanese writers have individually pawned themselves after each experiencing a period of writer’s block. This gathering of deceased literary giants battles it out with each other in a series of zany scenes as they all seek to return to creative form and escape the crazy courtyard. Suicide attempts are the standard normal when the writers’ efforts end in failure. Japanese literary master Ryunosue Akutagawa, played by the versatile Yoshiharu Masuda, is the central character in this carefully crafted cascade of bedlam. Akutagawa is supported by other legendary figures like Yasunari Kawabata, Osamu Dazai and Yukio Mishima.

Whatever you make of this matrix of madness and existential angst, it certainly forces one to think about the cultural influences and pressures faced by of some of Japan’s leading writers of the last century. Indeed until I saw this production I never actually realized just how many of the well-known Japanese authors depicted in the play had taken their own lives: Ryunosuke Akutagawa poisoned himself, Yasunari Kawabata gassed himself, Osamu Dazai drowned himself and Yukio Mishima disemboweled himself. Suicide appears to be a fixture of the Japanese literary world.

While I found the production both entertaining and thought-provoking, it was also somewhat disjointed. There seemed to be two distinct, competing entities within the narrative. On the one side, there was a philosophical exploration of life and death while in the other corner a tempest of mayhem and madness vied for dominance. The conflict between the two was never properly resolved. This duality mostly likely stems from the multi-authorship of the piece, which was organically created from a collaboration of all the actors in the company. The Japanese characters that make up the group’s name, Mugensha, translate as Dream Reality Company, which basically embodies their approach in this production.

The performers justify their work with the explanation that the dividing line between genius and madness is wafer thin. Over two thousand years ago the Roman philosopher Seneca endorsed this sentiment when he wrote that “there is no great genius without some touch of madness.” However, the German philosopher Friedrich Nietzsche, while not specifically referring to theatre companies, observed that madness is rare in individuals but the rule in groups.