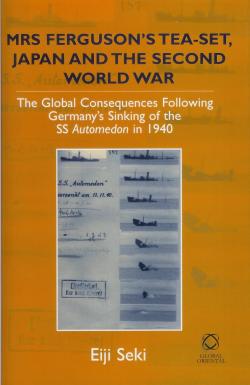 The SS Autmedon was sunk by the German raider Atlantis, masquerading as the British auxiliary cruiser Antenor on 11 November 1940 south-West of Achin Head on the north-western tip of Sumatra on her way to Penang. The Germans discovered on the ship ‘Most Secret’ papers being sent to the British Commander-in-Chief in the Far East. These ‘contained extremely detailed information on the Royal Navy’s and the RAF’s armaments and positions, the defence of Singapore and possible response measures to Japanese aggression, as well as an analysis of the roles of Australia and New Zealand.’ This was a hugely important find and steps were taken by the German commander of the Atlantis, Captain Rogge, to ensure that these papers were delivered as soon as possible to German intelligence in Japan. They were then soon in Japanese hands.

Ambassador Eiji Seki, the author of this book, thinks that the Japanese misinterpreted the intelligence in these documents which were out of date by the time the papers reached them. He believes that this was an influential factor in the Japanese decision to attack Pearl Harbour and open hostilities in December 1941.

The story which Seki relates in this book is a fascinating one and I found it difficult to put it down. He describes in graphic detail the voyage of the Automedon and the action which led to her loss. He follows the survivors from her crew and passengers through their hardships, captivity and release as well as the adventures of those who managed to escape. The reader also learns what happened to them after the war ended. Two survivors attended the launch of the book at Daiwa Japan House in London on 2 November 2006.

Seki also provides an account of the actions and fate of the Atlantis and of its captain who survived to become commander of NATO forces responsible for the defence of northern Germany.

It is hard to understand today why these most secret documents were sent not by a warship but on a merchant ship which might be intercepted and sunk. Communications at that time were difficult and air transport was not only very limited but equally dangerous. Even so and despite the fact that they were in the hands of an experienced and reliable master such as Captain Ewan of the Automedon, with instructions to destroy or sink the documents in the event of an emergency, the decision to send these documents by a merchant ship was odd. In fact, as Seki explains, it was only by a series of misfortunes that the documents were discovered. The German raider’s instructions to the Automedon not to send out a distress call was not obeyed for understandable reasons and the Atlantis then shelled the British ship’s bridge killing the Captain and either killing or seriously wounding other senior officers. Second officer Stewart who had been injured tried to get at the mailbags in the strong-room but the key had disappeared and before he could act a German boarding party reached the ship. Even so the Germans might not have found the mailbags if it had not been for the innocent request of one of the passengers Mrs Violet Ferguson, who was on her way to Singapore with her husband, that her belongings be rescued if possible. Captain Rogge agreed to help her and as a result Mrs Ferguson’s luggage, including her tea-set, was collected from the Automedon and the mailbags were discovered before the ship was sunk.

This book is a reminder that the threat to British shipping came not only from German U-boats but also from surface raiders about which less has been written. The story is a salutary lesson in the importance of maintaining document security. It also underlines the fact that even the most significant documentary intelligence can be misinterpreted by wishful thinking and over-optimism.

The heroism of the merchant seamen who suffered so much and of the many who lost their lives in the conflict is rightly brought out by this story. The author gives due praise to Captain Rogge who treated his captives with consideration, but he also draws attention to the cases of ill-treatment of prisoners, especially of East Europeans, in Nazi Germany.

Ambassador Seki in investigating this story has done a huge amount of painstaking research and he is to be congratulated on turning the results into what is a gripping yarn as well as an informative and interesting piece of history.