Kamikaze, Cherry Blossoms, and Nationalisms: The Militarization of Aesthetics in Japanese History 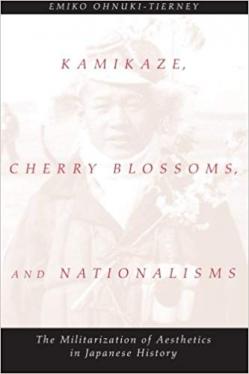 This is a fascinating book. On the one hand it is a historical treatise, an attempt to understand how and why intelligent and idealist Japanese students, after being drafted in World War II, succumbed to the militaristic ideology and sacrificed themselves as kamikaze pilots for the oppressive state which they disliked. On the other hand, it is an anthropological research into the meaning and role of cherry blossoms in Japanese culture. The novelty of Ohnuki-Tierney’s approach is that she combines the two spheres into a coherent theory of the uses and abuses of aesthetics by modern totalitarian regimes. She is probably the first scholar to introduce flowers into historical discourse.

As the author shows, the ubiquitous cherry blossoms, with their white and pink petals that scatter in the air with the first wind, have been associated, for a very long time, with Japan and the Japanese. They have symbolized the land and the people, joy and youth, romance and love, creation and procreation, beauty and purity, the impermanence of life and the glorious death of warriors. No other flower has been similarly discussed, portrayed in pictures, described in poems, and romanticized. So much so that the very word hana (flower) came to designate cherry blossoms. The affinity between this flower and the Japanese appears in the 1790 poem of the kokugaku writer Motoori Norinaga, which equates the Japanese spirit (yamato-gokoro) with the fragrance of the wild cherry blossom (yama-zakura) in early morning.

Ohnuki-Tierney writes that the Meiji government, intent on turning the Japanese into an obedient and self-sacrifying nation, exploited and manipulated the aesthetic sensibilities of the people. It changed the meaning of cherry blossoms from a benign symbol of cultural self-identity into a malignant symbol of nationalism and aggresion. The transformation started in the 1870s, when the government planted cherry trees on the grounds of the Yasukuni Shrine in Tokyo, where the souls of the fallen soldiers were enshrined. As a result, the cherry blossoms came to represent the brave soldiers and their rebirth as flowers in the Yasukuni Shrine. The official history of the shrine, published in the mid-1930s, carried cherry blossom decorations on its cover. The military adopted this flower enthusiastically: cherry blossom petals decorated the insignia of the imperial army and navy, and cherry trees were planted on military bases, replacing the pine trees that had grown around the old castles. As the empire expanded so did the cherry trees which were planted in the overseas colonies and territories.

The book dwells on the student kamikaze pilots in World War II. Drafted students constituted more than eighty percent of the navy kamikaze pilots and about one half of the army kamikaze pilots. As the author demonstartes, these pilots were a far cry from the western image of blood-thirsty and fanatic warriors. They came from the best universities, had a thorough western education, were influenced by romanticism and Marxism, and some of them were Christians who carried Bibles on their suicide planes. As young idealists, they sacrificed themselves for what they believed was the noble cause of saving Japan from destruction. They did not die for the emperor or for a god. Their belief in rebirth as flowers in Yasukuni Shrine was a romantic dream rather than a religious conviction. When the kamikaze squadrons were formed in 1944, they were given names related to cherry blossoms, such as Hatsu-zakura tai (First Cherry Blossom Corps) or Waka-zakura tai (Young Cherry Blossom Corps). The “special attack” airplanes carried an emblem of cherry petals, and the suicide gliders were called oka (cherry blossom). As many of the sorties took place in the spring of 1945, there were pilots who carried cherry blossoms on their uniforms (one of them appears on the cover of the book). They saw themselves as flowers scattered in the defense of Japan. Thus the military authotities exploited the impact of cherry blossoms on the Japanese psyche to convince the skeptic students to sacrifice themselves for the state.

Ohnuki-Tierney does an important job in presenting the fallen students’ writings to western readers. She claims that “the extensive writings left by the pilots have never been introduced in non-Japanese-language books, except for a few wills and other writings that fit the image of warriors who died for the sake of the emperor” (p. 20). But she is not the first to do so. Two years before the appearance of this book, an English translation of the famous collection of writings by fallen student pilots Kike wadatsumi no koe was published under the title Listen to the Voices from the Sea (tr. Midori Yamanouchi and Joseph L. Quinn, S.J., Scranton University Press, 2000). Ohnuki-Tierney’s book focuses on five student pilots whose writings, in the form of diaries and letters, were published after the war by relatives and friends. From their writings all five appear very sophisticated and intelligent. The appendix lists the amazing number of 1,356 books in Japanese, German, French and English that these students read in their short lives. This raises the questions of how representative these five students were, to what extent their frame of mind also characterized other student pilots, and how much were they different from the non-student soldiers, who also died bravely in war. It would have been interesting to compare their writings with those of other soldiers who died in battle. The author acknowledges the existemce of an “invaluable collection” of published letters of fallen soldiers from Iwate Prefecture, but she defers its examination to a “another project” (p. 187). She explains that she chose these well educated and broad minded students because they were “the most unlikely group of Japanese” to sacrifice their lives in war (pp. 19-20). This assumption ignores the fact that intelligent and idealist young people in many other countries did the same in the wars of the twentieth century.

The author regards the harnessing of aesthetics to politics as a fascist phenomenon, following Walter Benjamin’s famous saying that fascism aestheticizes politics, while communism politicizes art. Insightful as this saying sounds, exploitation of aesthetics by the state did not start in modern times and it is not limited to fascist regimes. The Romans did it in their monumental architecture, the French did it in Napoleon’s triomphal marches, and the Soviets did it in their political rallies. The poem asserting that it is “sweet and noble” to die for the “fatherland” was not composed by a European fascist or a Japanese militarist but, as the author admits, by the Roman poet Horace in the first century BC. (p. 277). The blending of art with military values existed for centuries in bushido, zen, and the martial arts of Japan. When the Meiji government set out to eulogize the “fallen” soldiers who died in the internal struggles in the wake of the restoration, it followed the western pattern at that time of referring to dead soldiers as having “fallen” (although in the west the image was of fallen trees rather than of scattered flowers).

Throughout the book a distinction is made between patriotism, i.e. “the individual sentiment of love of one’s country without political dimension” (p. 191), which is considered to be natural and noble, and nationalism, i.e. loyalty to a political unit and a political leader, which is condemned as evil. This distinction is ahistorical, as the two have usually gone together. When the British fought for king and country, when the French fought for the revolution and Napoleon, and when the Russians fought for motherland and Stalin, were they patriots or nationalists? The fact that prewar Japanese liberals espoused nationalism should not surprise the author and need not be explained by the existence of “feudalistic remnants,” as Japanese historians tend to do. Liberalism and nationalism did not contradict each other in the nineteenth and early twentieth centuries, and western liberals were often as nationalistic as their Japanese counterparts.

There are some factual inaccuracies in this book. The Satsuma Rebellion took place in 1877 and not in 1876 (p. 81), Admiral Togo’s great victory was in the naval battle of Tsushima and not in the battle of Port Arthur (p. 109), the 2600th anniversary of the legendary establishment of Japan was in 1940 and not in 1872 (p. 132), the Showa emperor never signed the Potsdam Declaration (p. 99), Dalian was not a “small village in northeastern China” (p. 181) but an important port there, Mishima committed suicide in 1970 and not in 1969 (p. 119), and “nikudan” means human bullets and not human cannons (p. 113). These small faults should not obscure the important message of this book, that our aesthetic sensibilities are in constant danger of being manipulated by the state for purposes that we do not support. The cherry-blossom petals that Emiko Ohnuki-Tierney showers in this study on our historic consciousness are a timely reminder.