Nationalism and Internationalism in Imperial Japan 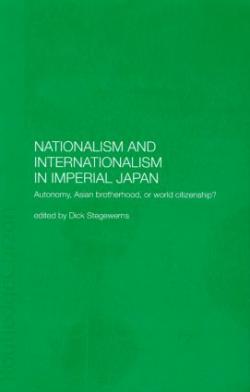 As the author of a book on Japan’s Struggle with Internationalism, I have already encountered the perplexing problems which the scholars who have contributed essays to this book have been researching. The editor has assembled a strong team of experts who analyse how different generations of opinion leaders tried as the twentieth century developed to solve what they perceived as a dilemma: how to reconcile nationalism, the desire for a politically and culturally autonomous Japan, with internationalism, the desire to have a role in a pluralistic liberal world.

After a theoretical introduction, Part II of the book consists of five specialist studies of important thinkers from the Meiji and Taisho periods : Fukuzawa Yukichi who died in 1901; Tokutomi Soho whose long career as a publicist over-arched the period from the 1880s to 1957; Nitobe Inazo whose publications in English range from 1900 to his death in 1933; Ishii Kikujiro, a diplomat who was thrown into the political arena; and Yoshino Sakuzo who was an active publicist from 1910 to his death in 1933. In Part III there are equally important case studies drawn from the early Showa period (1926-41) on Royama Masamichi, Ishibashi Tanzan and Yokomitsu Riichi, though some of these overlap with those in Part II. In addition, the contributors mention many more thinkers who do not qualify for a separate chapter to themselves.

Politicians who had to balance these issues in practice shared the same dilemma and were unquestionably influenced by these thinkers. In general those covered in this volume are not academics but intellectuals who had had the privilege of travelling abroad and were sensitive to global problems. Their prime concern is with finding a place for a resurgent Japan in the context of broader international society. In the main their ideas are carried in mass circulation journals, published weekly or monthly, rather than textbooks; and so they are names fairly well-known and respected in Japanese society. This is a group of individuals which does not have a parallel in the west.

But they were addressing a problem which was not unique to Japan. Nationalism and internationalism are difficult terms which require definition and, even when defined, interpretation. For Japan there is the problem of translating these western concepts appropriately into Japanese. Thinkers in other countries, not least in Britain, had a similar problem in reconciling the interests of the nation-state and the interests of internationalism. It was easier for non-Japanese publicists to ‘toe the internationalist line’ because their countries were, after the carnage of the first world war, less ambitious and inclined to rest on their laurels. Japan, on the other hand, had grappled with the creation of a modern nation-state amid fears of foreign intrusion and had known international success in wars with China and Russia. It was hard, therefore, for Japanese publicists to advocate international restraint at a time when the generality of the public had built up considerable expectations in return for their sacrifice. That was why, when a world body was set up in the form of the League of Nations, Japanese intellectuals rushed to support it and hoped to reconcile membership in it with the prevailing nationalism of the 1920s. This was a struggle and many of those in these studies changed their minds during their lifetimes as the trajectory of Japan’s development changed.

It would be invidious to draw special attention to any one study in this book. The standard of the research, writing and presentation is very high. It deals with an important aspect of Japan’s prewar history and illustrates the doubts and uncertainties felt in intellectual circles. It illustrates a diversity which is a useful corrective to many studies of 1930s Japan. This is a volume which will be valuable for historians, political scientists and general observers of the Japanese scene as the climate of debate changed in the 1930s.