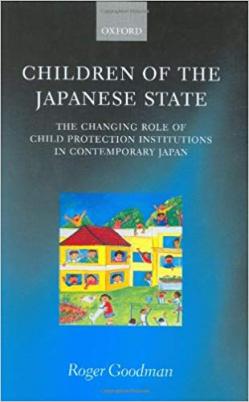 The Japanese family is undergoing a period of tremendous socio-economic upheaval and losing some of its former status as the bastion of social stability. The massively increased divorce rate along with public acknowledgement of domestic violence and child abuse are just a few of the most visible signs of change. The family is also in a state of economic decline with annual household incomes dropping yearly. All these factors are fundamentally altering the way Japanese people conceptualize the interlocking realms of the family. These rough seas of social change form the dynamic backdrop for Roger Goodman's superbly researched "Children of the Japanese State: The Changing Role of Child Protection Institutions in Contemporary Japan."

Goodman takes the reader into the previously little explored territory of state child protection, producing the first and most comprehensive English language study to appear on the subject. Every aspect of the topic is meticulously covered in this outstanding work which also offers excellent footnoting and an invaluable reference list.

From a Western European perspective, certain aspects of the Japanese child protection apparatus appear to be completely missing or deficient. Most noticeable is the lack of any professional social workers as well as very little in the way of a tradition of adopting or fostering children in need of care. Consequently, the entire equation for how and why Japanese children come to be in protective state care is completely different from the British or Scandinavian models. These features have often made the Japanese system appear enigmatic, creating a challenge for researchers.

Skillfully avoiding the trap of an ethno-centric based approach, Professor Goodman takes the reader on a well-balanced journey deep into the inner workings of the Japanese system.

Goodman is an accomplished anthropologist as well as a Japan specialist. By combining these two hats, he creates an illuminating piece of substantive research. Drawing on extensive fieldwork, he provides a commanding picture of children's institutions in Japan. Most of the data was collected during two separate visits to Japan, spanning almost a decade.

His initial research was conducted at a children's home in Tokyo in 1991 and the second trip covered the period 1998/99, when he was based in Osaka. The author builds upon this work with supplementary research conducted at other children's institutions as well as interviews with a wide spectrum of people working in differing fields of child welfare. This wide range of sources produces a stimulating read.

Reflecting the shifts occurring within society, Japanese child protection institutions have likewise been going through a period of rapid change. Domestically, they have been buffeted by new social phenomena such as increases in divorce, child abuse and parental suicide rates. Until the nineties, Japanese divorce rates had been relatively low, comparable to most Southern European countries. Social ills like child abuse were largely hidden away until the floodgates were opened in the late nineties.

Parental suicide has risen alarmingly in recent years with many blaming the poor economic conditions for the huge increase. Externally, the new global age has also produced several factors which have accentuated the pace of change in the child protection system. These include Japan's own desire to develop its less than perfect social welfare policy and the signing of the United Nations Convention on the Rights of the Child, which discourages protective childcare.

The book examines every imaginable aspect of the Japanese child protection system and related issues. In the first chapter Goodman looks at social exclusion in Japan, putting child protection in an international context.

Japan has relatively few children in care compared with other OECD countries, but the absolute number has remained fairly constant over the decades. Currently, Japan has somewhere in the region of about 31,000 children in state care. In most other industrially advanced countries, the figure has sharply dropped due to declining in birthrates and changing child welfare policies.

The second chapter glides into an examination of the development and delivery of Japanese social welfare in the nineties. Goodman examines the underpinning concepts of Japanese welfare, covering the postwar period with some excellent and hard to find material on the uniquely Japanese volunteer social adviser system know as Minsei jidouiin.

The delivery and development of child protection forms the focus of the next chapter, providing an excellent overview and analysis of the situation. Incredibly, Goodman manages to cover the entire spectrum of postwar care institutions, including not only child protection institutions (Yougoshisetsu), but also child guidance centres (Jidousoudanjo), mother-child shelters (Boshiryou), educational protective facilities (Kyougoin) and residential infant-care facilities (Nyuujiin). Due to the 1998 reforms to the system, all these institutions have subsequently changed their names. The child protection institutions, the main focus of Goodman's research, are presently called Jidou Yougoshisetsu.

Like the United States and Britain, in Japan child protection institutions are an area ordinary people know very little about. An additional problem in Japan is that these institutions are often confused with schools for children with handicaps, giving a false impression about the kind of children in care. This particular misunderstanding arises from the similarity in the Japanese names for child protection institutions (Yougoshisetsu) and schools for children with disabilities (Yougogakkou). This kind of problem partially explains why many children in residential care are reluctant to mention their status to people outside the institutions.

As in many other countries, Japanese children come into care for a wide variety of reasons, which are continually changing. To illustrate this, Goodman explains how the types of children in care have changed over the decades. He provides detailed analysis of the underlying causes, also offering a few enlightening case studies.

Chapters four and five provide a detailed guide to the management, staffing and social organization in the child protection world. The entire intricate anatomy of these institutions is efficiently dissected before the readers' eyes. An interesting aspect of the management structure is that quite a few of these homes have been run by members of the same family for a number of generations. The complex strands of the relationship between the private homes and central government is thoroughly explained. Goodman manages to untangle the seemingly Byzantine private-state axis, giving the reader a real sense of how things actually function.

Chapter six takes an in-depth look at the effectiveness of Japanese institutional care as a form of child protection, covering everything from the children's emotional needs to their educational achievements.

This analysis leads into the following chapter which examines various alternatives to child protection, chiefly fostering and adoption. A good deal of comparative data is provided and once again Professor Goodman comes up with some fascinating material on little known aspects of Japanese life. For example, adoption within kinship circles was, and still is, seen as a legitimate means for providing a male heir for a family line. This was especially the case amongst elite Japanese families. Goodman provides several good examples of this, including two postwar prime ministers, who were actually biological brothers; Nobusuke Kishi and Eisaku Satou. He also looks at the adoption versus abortion debate from a Japanese perspective.

The final chapter looks at the evolving role of child protection institutions in a changing Japan. The system is faced with two major threats to its existence, the declining birthrate and the UN Convention on the Rights of the Child, which does not favour institutional care.

Goodman also provides an impressive guide on child abuse, which is an issue creating a new role for child protection. Some see the UN Convention on the Rights of the Child as a vehicle for trying to impose a North European/Anglo-Saxon philosophy of children's rights on Japanese culture. All these trends are leading to a different role for child protection in the twenty-first century.

It is difficult to fault this book, although some Japan specialists will probably object to Goodman's very occasional references or use of Japanese uniqueness theories (Nihonjinron). For example, several times he mentions Chie Nakane's book Japanese Society (1970), which is nowadays rather unpopular in some quarters of Japanese studies. However, given the overall excellence of the work, even the most die-hard purists will surely be able to forgive these few citations.

Part of the book's great charm is that it covers the subject matter so comprehensively and systematically. This is undoubtedly due to the fact that it represents almost a decade of work. This allows Goodman to clearly identify the various dynamics of change and isolate the elements most strongly influencing future developments. Such clarity would not be possible from a more short-term research project.

Goodman's balanced and non-ethno-centric approach give the reader real insights into the Japanese system. The rich analysis of a functioning alternative to standard Western models of child protection institutions certainly challenge many of the assumptions held by British and Northern European welfare policymakers.

This work will be attractive to a wide range of specialists outside of the child protection field as many of its individual chapters provide difficult-to-find English language material on a huge range of child related topics including adoption, fostering and child abuse. This is sure to make the book a major reference source for family studies experts in the coming years.

Additionally, the chapters all fit so seamlessly together that it makes the entire text flow and a pleasure to read. The book also complements some of Goodman's other research on Japanese welfare policy.

The last decade has seen the emergence of a new generation of excellently researched English language books covering previously unexplored areas of Japanese society. Roger Goodman's "Children of the Japanese State" is a very welcome addition to this growing body of literature. The book makes a major contribution not only to anthropology but also to the fields of Japanese studies, welfare policy studies and family studies.