Death of a Salaryman 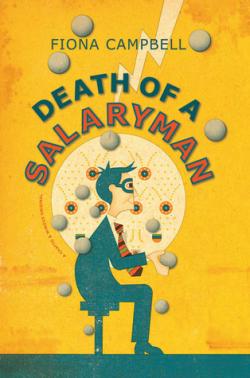 I enjoyed this book, but then I took it for what it is – a quirky narrative that portrays, exactly as it says on the tin, the death of a salaryman (and his resultant reincarnation): a book set in Japan, featuring an all-Japanese cast, living an all-Japanese life. Remarkably, it was penned by a British woman with very little experience of the setting she features.

Those who’ve spent time in Japan will pull up a few inconsistencies and jump upon one or two moments that have been written in western ink, but I thought Fiona Campbell had an awful lot down pat for someone whose in-country experiences extend only to a few months of working at Unilever in Tokyo before she completed an MA in creative writing.

On paper, Kenji Yamada’s life is a cliché. He wakes at dawn, commutes from another prefecture, works long hours, has a few beers with colleagues and just about makes it home to his wife by midnight. He’s a decent sort of a chap, but hardly the sort of man you’d want to read about. That is until fate knocks him for six and loyal Kenji loses his respectable career on his 40th birthday.

As lost as a gaijin on the Yamanote-sen, Kenji lets a series of bizarre encounters shape his suddenly interesting life. Most of these are masterminded by the collection of odd characters who move swiftly into his world. Somehow, he manages to eek out a living playing pachinko machines, whilst his uptight wife and bitter mother-in-law wonder why the company trip to Disneyland has been cancelled.

Of course poor old Kenji is found out and his interfering, embarrassed wife secures him a job in a post-room. A few of Kenji’s layers peel away and we begin to see his pride, his dreams and his anger (long-awaited, believe me). And then he is struck by lightening.

Kenji Yamada, battered, bruised and now with a full head of white hair is a new man. A determined man. Well, sort of. Fiona Campbell has a firm grip on Kenji – this is not a Clark Kent to Superman rebirth. In his own way though, Kenji manages to begin a new career, creating the odd game show that he’s longed for years to produce. It’s an uphill journey but I believe I actually verbalised my inner ‘hurrah’ when Kenji finally pulls himself together and raises his fist to a foe (you might do the same during a hilarious incidence with some rotten apples). Is Kenji getting some gumption? Again, sort of.

What I like about this book is that despite all of the unlikely mishaps that fill Kenji’s new life, there are no miracles here. The journey is unpredictable, bizarre and unlikely, but as Kenji’s world is remodelled, he remains himself, perhaps just a slightly cooler, slightly tougher version.

Does Fiona Campbell get it right? I believe she does. What she occasionally misses in accuracy, she nails in understanding of her characters. Kenji Yamada feels real. I have a clear image of him in my mind and there’s something about him that I couldn’t help liking.

It’s remarkable that just a few months in Japan have netted so much fodder for Campbell’s debut novel. She manages to interweave references to things she must have seen with her own eyes. I can’t help smiling as I read about the notice attached to the keypad of Kenji’s office door showing the new security code. Next to it, a memo sellotaped to the door reads “Don’t tell anyone, but here’s the new access code.” I have no doubt that Campbell once smiled at the original version.

This book will, I suppose, appeal more to those with limited experiences of Japan, but I think that even picky Japan enthusiasts like self will find themselves warming to Kenji. Expect an offbeat, entirely readable journey as Kenji journeys from insignificance to interesting.