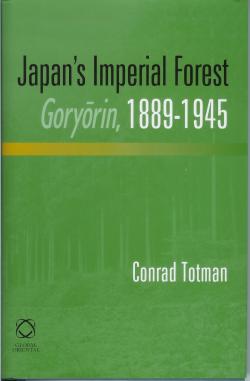 Conrad Totman, Emeritus Professor of Yale University and author of this work, is a specialist in Japanese history and has published many books especially about the Tokugawa (Edo) period and Japan’s environmental history.

This book is likely to be primarily of interest to students of forest history and silviculture, but the preservation of forests is now such an important consideration in the preservation of the environment and in combating global warming that it should be of interest to a wider audience. The way in which forests provided funds for the imperial household is also relevant to students of the imperial system.

After setting out the historical background, including a discussion of Meiji land reform, Totman describes the steps leading to the establishment of the Goryōrin (imperial forest). He draws attention to the way in which Meiji leaders advocated the case for using national forests as a source of income for the imperial household, but he notes that the imperial forests “never achieved complete stability of size, location, or character.” They were “continually subjected to outside pressures and gradually shrank (page 43).” Totman discusses the management of the imperial forests stressing the importance of afforestation and aftercare and underlines the improvements in the technology of silviculture.

Totman makes some interesting comparisons between Britain and Japan. He concludes (page 97) that “in Britain, even though woodland had largely disappeared by the twentieth century, what remained was of such little material consequence to British life that forest issues were not a source of severe and sustained conflict between rulers and ruled. In Japan, however, even though the realm was far more richly forest-clad, competition for the yield remained so intense as to constitute a central focus of ruler-ruled conflict until 1950 or so, as exemplified by the vicissitudes of Goryōrin.”