Japanese Diplomacy in the 1950s: From Isolation to Integration 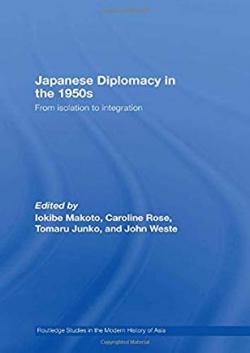 The studies in this volume are a valuable contribution to knowledge of Japan’s post-war diplomacy and will help students of Japanese foreign policy to understand some of the complicated negotiations which affected Japanese interests.

Perhaps because as a young diplomat I was involved on the margins of some of the events discussed I was particularly interested in Part I “Japan, Anglo-American rivalry, and indifference.” In Chapter 1 Shibayama Futoshi concludes that “the US forced the UK to accept the strategic notion that a Soviet attack on Japan was sufficient casus belli…In this way, the US forcefully linked the defence of Japan with that of Western Europe.”

In Chapter 2 on “Great Britain and Japanese rearmament, 1945-60” John Weste notes correctly that “Military security was hardly the first instance in which British officials found themselves ignored by their US counterparts. The Foreign Office had earlier noticed an American reluctance to share its economic policies for Japan.” (The extent to which members of the US mission in Japan were prepared to share information with members of the British mission depended to a considerable extent on personal contacts.) Later Weste asserts: “ten years after allied victory and three years after the end of the occupation, the FO experts blatantly still held little faith in the seaworthiness of Japanese democracy.” Nor were they convinced that Japan would long adhere to the pacifist principles underlined by Article 9 of the constitution. (Former members of the Japan Consular service with whom I served in the British mission were understandably sceptical, in the light of their experience of pre-war Japan, about the intentions of pre-war politicians, such as Kishi Nobusuke, who had leading roles in the Japan of the 1950s.)

Chapter 3 by Tomaru Junko on “Japan in British Regional Policy towards South-East Asia, 1945-1960” asserts that Malcolm MacDonald and his successors as Commissioner General for the United Kingdom “continued to play an important role in shaping British policies towards South-East Asia through their correspondence with the Foreign and the Colonial Offices, and through chairing the annual conferences of the British Heads of Mission under their jurisdiction.” As a very junior diplomat it fell to me to act as secretary of the conference chaired by Malcolm MacDonald held at Bukit Serene in December 1950. I do not think that any of the colonial governors or, for that matter, British ambassadors present felt that they were under MacDonald’s “jurisdiction.” The governors, in particular, jealously guarded their autonomy and prerogatives and would never have accepted any attempt by MacDonald to dictate policy. Hong Kong was not, of course, part of South-East Asia and the governor of the colony, Sir Guy Grantham, hardly disguised his contempt for the whole affair. Tomaru Junko asserts that MacDonald’s later appointment as British High Commissioner to India was due to his being regarded as too “Asian-minded” and “insufficiently active in directing a co-ordinated anti-communist front and conveying London’s views to the elite.” If this was the view in parts of Whitehall it was not in my view fair to MacDonald. MacDonald, a former politician and son of Ramsay MacDonald, the Labour Prime Minister, was informal in dress and manner. He got on well with Asians and preferred to mix with them rather than with the colonial elite in Singapore. I suspect that this had upset some of the stuffy senior colonial servants. MacDonald may also have ruffled feathers in Whitehall by his tendency to send lengthy secret and personal messages to Ministers and to bypass the normal channels. Rob Scott, his successor, who had been imprisoned in Changi jail during the war and had suffered greatly as a result, had been the under-secretary in charge of Asian Affairs in the Foreign office. He was able and intelligent. He was no “push-over” but was readier than MacDonald to stick to the accepted channels. Working in the Commissioner General’s office was a frustrating experience as our work consisted essentially of coordinating and liaising between the British missions and colonial governments in the area plus the regional information office on the one hand and the three service headquarters in Phoenix Park, Singapore, where we also had our offices. In the 1950s the Commissioner General had a useful role but his influence should not be exaggerated. The British ambassador to Japan was invited to the regular conferences in Singapore but Japan was not seen as central to British policies in South East Asia. As Tomaru Junko points out: “despite the closer contacts and co-operation between Britain and Japan in Asia in the latter half of the 1950s, Britain still distrusted Japanese intentions.”

Part II covers “Japan’s re-emergence in regional and international organizations” and contains interesting and informative studies by Kweku Ampiah on “Japan at the Bandung Conference,” Oba Mie on “Japan’s entry into ECAFE” and Kurusu Kaoru on “Japan’s struggle for UN membership in 1955.”

Part III is entitled “Japanese and US domestic constraints on Foreign Policy.” The first study by John Swenson-Wright is on “The Lucky-Dragon Incident of 1954: A failure of crisis management?” Swenson-Wright notes correctly that the incident revealed “an interesting ambivalence in Japan’s attitude to nuclear issues.

Japan’s nuclear allergy was highly selective.” His account of the revelations made by the Soviet defector Rastvorov is a valuable summary of an important episode. He notes that the Americans were increasingly frustrated by inaccurate Japanese press reporting about the incident. He quotes Bill Leonhart, then Minister in the US Embassy who was one of the ablest members of the state department (who would never have been accused of hiding his light under a bushel). Unfortunately, as Swenson-Wright points out, there were “very real failings” on the part of the US in handling the Lucky Dragon Incident at least initially. (I noted that Swenson-Wright has dug out of the archives a minute which I wrote in October 1954 as a junior officer in the Far Eastern Department of the Foreign Office. Young diplomats beware! Their confidential animadversions may appear in print one day! ).

One of the other two studies in this part is that by Robert Eldridge on “the Revision of the US-Japan security treaty and Okinawa” which I found enlightening. The other by Caroline Rose “Breaking the deadlock: Japan’s informal diplomacy with the People’s Republic of China in 1958-9” contained much which I did not know (I was at that time working in Bonn).