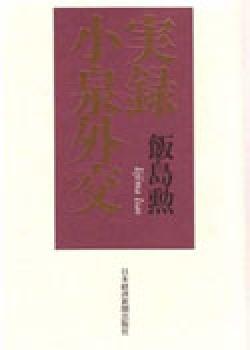 Iijima Isao, who was Prime Minister Koizumi Junichirō’s executive secretary, has come out with a new book in which he gives a full-fledged and intriguing account of the former prime minister’s diplomacy, focusing on records of his trips and of visits to Japan by prominent leaders from around the world. It follows the author’s earlier book, the subject of an earlier review in Issue 11 (Vol. 2 No. 5 October 2008 pp.2-3), about Koizumi’s domestic reforms.

By reading this record, perhaps the most striking lesson one learns is that a prime minister is required to have physical stamina to keep going with little sleep and a strong stomach to eat unfamiliar food presented by the hosts. In contrast to Koizumi’s physical resilience, his successor, Prime Minister Abe Shinzō had to resign after only one year mainly because of serious health problems that were aggravated by strenuous overseas trips.

In 2001, for instance, Koizumi was scheduled to fly to Beijing early in the morning of 8th October. Late at night on the 7th, Koizumi was informed that American bombing in Afghanistan had begun. At 2am on 8th, he convened an emergency cabinet meeting. At 3am, he held an emergency press conference. At 8 am, he boarded the plane for Beijing. He visited the Marco Polo Bridge and an anti-Japan war museum and expressed his apologies and condolences to the victims of the war between China and Japan. Then, he attended a working luncheon with Prime Minister Zhu Rongji that was followed by another meeting with Chairman Jiang Zemin. Late in the afternoon, Koizumi’s group flew back to Tokyo, arriving at 9pm. At 10pm, he convened another emergency cabinet gathering and then an anti-terrorist meeting. There is no record of how long these meetings lasted, but assuming he went to bed around midnight, for more than 24 hours, he kept a busy schedule without much sleep.

During his term in office from April 2001 to October 2006, Koizumi made 51 trips abroad, visiting 49 countries, some several times. He visited the United States 8 times, South Korea 7 times, Indonesia 4 times, China 3 times, Russia 4 times, Thailand, Malaysia and Vietnam twice each. Moreover, he was the first Japanese prime minister to visit Uzbekistan and Kazakhstan in Central Asia. His travels extended to Israel, Jordan, Palestine, Saudi Arabia, Egypt, and Turkey, as well as India and Pakistan. In Africa, he went to South Africa, Ghana, Ethiopia, and in the Americas, travelled to Brazil, Chile and Mexico. In addition, he talked over the phone with foreign leaders more than 90 times. He met with heads of state and other leaders who visited Japan on more than 200 occasions. His foreign trips included international conferences such as the G8 summit talks five times, ASEAN and APEC conferences, and the United Nations General Assembly in New York.

The book is a straight record of each trip with little political analysis but Iijima emphasizes the basic approach of Koizumi’s diplomacy. His book shows that, despite advanced technology in communications, meetings between political leaders are useful in improving bilateral and multilateral relations. This diplomacy, which is called “Shunō Gaikō” (top leaders’ diplomacy), in contrast to “Gaimushō Gaikō” (Foreign Ministry diplomacy), requires leaders of strong will and negotiation skills. Koizumi certainly made strong impressions on these accounts.

As for criticism that he caused strained relations with China and South Korea, Iijima quotes Koizumi as saying, “I believe later generations would give positive evaluation as they would come to understand the circumstances.”

Iijima asserts that the Foreign Ministry’s diplomacy focuses on long-term relations based on the expertise of government officials and those with an institutional memory of the history of relations with other countries.

In the Shunō Gaikō, direct encounters with top leaders are necessary because they can solve problems at political level, sometimes with dramatic results. A case in point was Koizumi’s visit to Pyongyang, North Korea. Koizumi confronted the North Korean leader, Kim Jong-Il, who conceded that his country was responsible for kidnapping Japanese citizens. That was in September, 2002. After his second visit to Pyongyang, in May 2004, Koizumi brought back five Japanese victims of kidnapping. But he failed to persuade Robert Jenkins, the American husband of Hitomi Soga, and their two daughters to join the group. Later, they were reunited with Soga in Indonesia, then came to Japan. Since Japan and North Korea have no diplomatic relations, Iijima says finding North Korea’s intentions prior to the meetings was difficult. Japan had to negotiate with the US military on the treatment of Jenkins, who had defected to North Korea from South Korea. Although the kidnapping issue dominated Japanese press coverage and public opinion, Iijima points out that the two leaders discussed at length issues of nuclear arms, missiles, and spy boats.

The sequence of Koizumi’s foreign visits reveals his priorities in foreign policy. In June 2001, soon after he became prime minister, Koizumi visited the United States, United Kingdom and France in one trip. Then he attended his first G8 summit in Italy. He again came to the United States immediately after the 9/11 terrorist attacks in New York and Washington, visiting the sites and assuring President Bush of Japan’s cooperation in combating terrorism. After consolidating close relations with Western partners, he visited China and South Korea in two separate trips in one month in attempts to improve bilateral relations that had been chilled with disagreements over Yasukuni Shrine, Japanese history textbooks, and Japan’s war responsibility. Then he attended multilateral talks of APEC in Shanghai and ASEAN Plus 3 meeting in Brunei. His last trip in his first year was to Belgium to attend the tenth annual Japan-European Union meeting where he met with senior EU leaders.

According to Iijima, Koizumi’s strategy with Asian and African nations was to treat them on an equal footing, respecting their national pride regardless of the size and power of those nations. Koizumi’s personality apparently played a major role as various episodes in the book illustrate how other leaders sought him out in international conferences, how he was often the top story in the press of host countries and how his love of music and open mind charmed dignitaries and children alike.

Iijima says that despite Koizumi’s seven visits to South Korea, bilateral relations were strained after President Roh Moo-hyun was elected. The meeting at the inauguration of the new president went well. By June 2005, however, when Koizumi made his sixth visit to Seoul, disputes over Takeshima (Dokdo in Korean and also known as the Liancourt Rocks in English) chilled relations. Despite an agreement that they would take turns visiting each other’s country, Roh never came to Japan for an official visit. Koizumi and Roh did have a brief meeting in Ibusuki, a hot spa in Kagoshima, in an informal setting.

With China, Koizumi’s visits to the Yasukuni Shrine were a sore point and Japan’s relations with China were strained during his tenure. (During the visit of China’s President Hu Jintao to Japan in May 2008, Koizumi declined to attend meetings with Hu, including a breakfast meeting with former prime ministers. Koizumi reportedly said he did not wish to spoil the occasion for Hu with whom he had heated arguments about the Yasukuni Shrine issue.)

Another failure was Japan’s bid to become a permanent member of the UN Security Council. In spite of Koizumi’s appeal in person to foreign leaders and assurances from many that they would support Japan, Japan could not overcome opposition from China and South Korea.

Koizumi’s talks with foreign leaders covered a wide range of political, economic, and security issues; in most of his speeches, he emphasized Japan’s willingness to work with other nations in expanding economic and trade partnerships, challenging global and social issues such as hunger and AIDs, and stimulating human and cultural exchanges. He made it clear that Japan joined the international effort to combat terrorism and sided with the US by sending National Self-Defense Forces on missions to Iraq and the Indian Ocean.

Koizumi kept up a swift pace for five years and five months, navigating domestic reforms, elections, and diplomacy, often giving instructions on legislative and political matters on the phone from his plane. His last overseas trip as prime minister was in September 2006 to Helsinki, Finland, for an official visit and to attend an ASEM6 (Asia-Europe Meeting). At a press conference, Koizumi expressed his satisfaction that the meeting had been productive, covering a wide range of topics including terrorism and weapons of mass destruction, AIDs, North Korea, the Middle East, the environment, and economic development.

The book has a complete list of Koizumi’s overseas trips, his meetings with foreign leaders in Japan, and the names of officials who, as special assistants to the prime minister, were involved in the preparation and execution of Shunō Gaikō.

A different version of this review first appeared on the National Bureau of Asian Research (NBR) Japan-US Discussion Forum and is reproduced with permission.