Chronicles of My Life, An American in the Heart of Japan 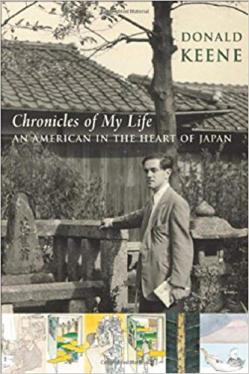 Keene is the most eminent foreign scholar of Japan. He has written more than thirty books about Japan including many translations of Japanese works from medieval to modern times and an illuminating history of Japanese literature.

His book “On Familiar Terms, a Journey across Cultures” which was published by Kodansha International in 1994 included some account of his life and his immersion in Japanese history and culture. The present volume is more the personal story of his life and friendships.

He was a lonely child, but was introduced to Europe as a boy when he accompanied his father in 1931 visiting Paris, Vienna and Berlin. One day in 1940 he came across in a second hand bookshop in New York a copy of Arthur Waley’s “Tale of Genji” which he bought for 40 cents. He found the translation ‘magical’ as so many others since have done. After the war when he was teaching at Cambridge University he enjoyed meeting Waley in London. He began to study Japanese before he joined the US Navy where he was trained at the US Navy’s Japanese Language School.

One of his war-time assignments with Otis Carey took him to Attu, a cold inhospitable island in the Aleutians where he took part in the American landings. There were only twenty-nine Japanese prisoners. Later he took part in the landing on Okinawa, by good fortune escaping death from a failed kamikaze attack. After the war he was sent to China rather than to Japan, although he managed a week’s quick visit to occupied Japan.

On being demobilised he resumed his studies of Japanese at Columbia University and later at Harvard where he was disappointed by Professor Elisséeff’s attitude towards Japanese scholars. From there he managed to win a fellowship to go to England. He thought it would be a mistake to study Japanese in England where there were at that time few opportunities for Japanese studies. Instead he thought of taking up Arabic and Persian, but was dissuaded from pursuing this idea. Although he had an MA from Columbia he was regarded by Cambridge University as an undergraduate.

He decided to spend his first Christmas in Italy. On his way there his only copy of his draft doctoral thesis was stolen. Devastated by this experience he was fortunately helped by kind English friends. He set about rewriting his thesis and came in touch with Eric Ceadel who had been appointed senior lecturer in Japanese at the University. Ceadel asked him to teach Japanese conversation. ‘At the time, students at Cambridge were introduced to the language by reading the preface to the tenth-century anthology of poetry “Kokinshu” in the original…My conversation classes were most peculiar. The students tended to use tenth-century vocabulary even when relating contemporary events.’ Donald went on to join the staff at Cambridge and worked on his book “The Japanese Discovery of Europe.”

In London he was able to enjoy concerts and operas. He recalled these London performances “with particular affection and with gratitude” that he “happened to be present during an extraordinary revival of music.” He records that “On the whole I was happy during he five years I lived in England,” but he wanted to get to Japan.

He managed to win a fellowship which enabled him to travel to Japan. He reached Tokyo in August 1953 and went straight to Kyoto. He found Kyoto “a wonderful city” and immersed himself in Japanese culture. “My greatest pleasure at this time,” he writes, “was my kyogen (comic drama) lessons”.

Cambridge University would not extend his leave of absence but he was allowed to do so by Columbia University which offered him a post. From then on he has commuted each year between New York and Japan.

In Japan he made many friends in the literary and publishing world including Tanizaki Junichirō, Kawabata Yasunari and Mishima Yukio, but while he worked on modern novels he never flagged in his study of Japanese classical literature.

All foreign students of Japanese culture owe a great debt to Donald Keene’s scholarship and must admire his sensitive writing about Japan, its literature and its history. They will enjoy this memoir with its charming little colour illustration. Donald’s humility and humour shine through.