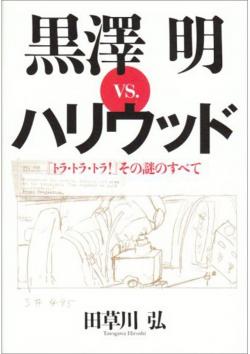 The world-famous movie director, Akira Kurosawa, stood before 150 guests in the banquet hall of Tokyo Prince Hotel in April of 1967 and declared: “This movie on Japan’s attack on Pearl Harbor, in collaboration with Twentieth Century Fox, will be the most important work in my career.”  On that day, both the American team headed by the veteran producer, Elmo Williams, and the Kurosawa team had no doubt that the movie “Tora! Tora! Tora!” would be a masterpiece of human drama from the perspective of both Americans and Japanese. The prominent Hollywood mogul, Darryl Zanuck, having produced “The Longest Day, “a spectacular film about the allied landing on D-day in Normandy that was done with a multi-national cast and crew, was drawn to the idea of a similar movie on Pearl Harbor. As the CEO of Twentieth Century Fox, he turned to his old friend and Oscar winning editor and producer, Elmo Williams, to supervise the project.

Williams recommended enlisting Kurosawa as director and script editor for the Japanese team, even though he had never met Kurosawa. Williams loved Kurosawa movies such as “Rashomon,” “Ikiru,” and “Seven Samurai.” Kurosawa accepted the offer and preparations began at full speed. One year and eight months later, Twentieth Century Fox asked Kurosawa to resign, citing his deteriorating health. Kurosawa was replaced by two Japanese directors, Toshio Masuda and Kinji Fukasaku, with whom Williams completed the project. The movie was released in 1970.  The author of this well researched book, Hiroshi Tasogawa, tells a fascinating story of what went wrong in this cross-cultural encounter that began with good intentions and shared dreams but ended in destroying Kurosawa’s reputation and causing substantial financial damage to Twentieth Century Fox.

From the beginning, the language barrier between Americans and Japanese played a major role in the fiasco. It was personified in the controversial figure of Tetsuro Aoyagi, Kurosawa’s producer. A former New York representative of Toho Movies, Aoyagi was recruited by Kurosawa to look for joint projects that would be financed with foreign funding. Kurosawa, who was a genius in movie making but who had little business sense, became frustrated artistically and professionally as his production company plunged deep into debt. Without knowledge of English, Kurosawa relied on Aoyagi in negotiations with Twentieth Century Fox. Aoyagi had total control of communications between Kurosawa and the Americans. He briefed Kurosawa about progress in negotiating with the Americans but only orally; Kurosawa never saw the contract or signed it, although lengthy negotiations and agreements on production details, which Kurosawa signed, made the contract legally binding. The contract itself was only in English. Had Kurosawa read it, he would have discovered that, contrary to his belief, he did not have supervising authority over the entire movie, including the American battle scenes. Rather, he was relegated to being a hired gun for the Japanese portion of the film. The authority for final decisions rested with the CEO and Executive Producer of Twentieth Century Fox, although Kurosawa thought he had been authorized not only to supervise the movie making but to approve the final editing of the film. The contract included no such clause.

Even before the shooting started, the American and Japanese teams clashed over the script. Kurosawa rejected the American team’s rewrite on the opening scene of Admiral Yamamoto’s command ceremony two years before Japan’s attack on Pearl Harbor. Kurosawa also rejected the ending scene in which, after the attack, Meiji Emperor’s poem lamenting warring human beings was narrated. The script earlier had to be approved not only by Twentieth Century Fox executives but also by the U.S. State Department and the Defence Department, as their cooperation in war scenes was vital. Numerous rewrites and scrapping scenes irritated Kurosawa, who was not accustomed to criticism or requests for rewrites. Final decisions were always made by Twentieth Century Fox, not by Kurosawa.

Then Kurosawa, engrossed in the pursuit of his own ideas of the movie, ignored costs, scheduling, and logistical problems, which he could get away with at home because of his fame. In contrast, the Americans believed that the contract should be strictly honoured, particularly the production schedule as the release date was already set. This was another cross-cultural misunderstanding not only about the latitude a director could have but about the director’s legal obligation to finish the project.

When the shooting started in a studio in Kyoto, Kurosawa’s behaviour became eccentric because of his frustrations and exhaustion with seemingly endless arguments and what he saw as unacceptable compromises. His explosive hot temper was triggered for the slightest reason, his binge drinking went on throughout the night and led to late arrivals or no shows at the studio, and he was paranoid that his life was in danger. The Japanese staff refused to work for him, and the studio was in chaos. Delays in shooting cost Twentieth Century Fox $20,000 a day. Three Japanese doctors examined Kurosawa and two advised that he undergo several weeks of treatment for emotional stress and rest afterwards. Attempts to resolve the situation failed and Williams finally told Kurosawa on Christmas Eve of 1968 that he was relieved from his assignment.

In 2002, Tasogawa visited the 89-year-old Elmo Williams in Oregon. Williams, then retired, acknowledged that he had made a mistake in choosing Kurosawa, although the choice seemed excellent at the time because the senior American executives and Williams respected Kurosawa as a fellow movie maker. Williams liked Kurosawa as a sensitive man but felt that Kurosawa never opened his heart to him. He understood that Kurosawa’s explosive temper, which poisoned the working environment, reflected his acute anxiety and the pressure he felt to produce a great movie. Kurosawa once said “Tora! Tora! Tora!” would be a record of neither victory nor defeat but a record of mutual misunderstanding and miscalculation and the waste of excellent human capabilities and energy. Tasogawa’s account of the production of this movie is exactly that.

“Tora! Tora! Tora!” owes its origin to two books; “Broken Seal” by Ladislas Farago, a U.S. Naval intelligence operative during World War II and author of books on espionage; and a manuscript on Japan’s attack on Pearl Harbor by Gordon Prange, professor of Japanese history at the University of Maryland, which was published later under the title “At Dawn We Slept.” Twentieth Century Fox bought the movie rights for Prange’s typewritten manuscript that was titled “Tora Tora Tora.” Both Farago and Prange received screen writing credits in the movie.

In addition to interviews of both Americans and Japanese involved in the project, Tasogawa searched archives scattered in libraries in the United States, including those at the Academy of Motion Picture Arts & Sciences, the University of California at Los Angeles, and the University of Southern California. Without access to those archives from Twentieth Century Fox and people such as Williams, this book would have been incomplete because the author discovered that there was almost no surviving archive in Japan.

Hiroshi Tasogawa was a reporter for NHK and the Associated Press and later was a professor at Tokai University. He has published several books on Edward R. Murrow, the famous radio broadcaster during World War II and later a TV anchor. Tasogawa’s book on Kurosawa received several awards including the Oya Soichi Award for Best Nonfiction in 2007.

A different version of this review first appeared on the National Bureau of Asian Research (NBR) Japan-U.S. Discussion Forum and is reproduced with permission.