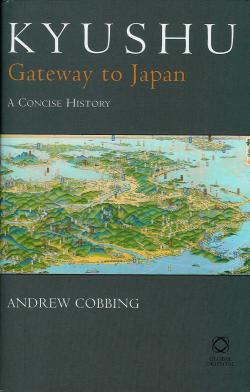 Of the four main Japanese islands, Kyushu has a particularly interesting history. The myths about the origins of the Japanese islands and its imperial line began at Takachiho, in what is now Miyazaki prefecture. Here was “The Floating Bridge of Heaven.”

One of Andrew Cobbing’s aims in this book was to draw attention to the cultural diversity in Japan which is apparent to anyone who spends time in an outlying part of Japan such as Kyushu. This diversity is not always adequately brought out in much of the writing in English about Japan which has a tendency to focus on the view from Tokyo.

Cobbing begins his account of the history of Kyushu with reference to various myths, but moves in his second chapter to the discovery in 1985 of one of Japan’s earliest settlements at Yoshinogari in Saga prefecture which chimed with early Chinese descriptions of Japan or the land of Wa and of the early Japanese ruler Himiko or Queen of Wa. This leads on to a discussion of the location of the legendary Yamatai, of early settlements in Kyushu including the building of giant tombs and of contacts between Tsukushi, an early name for Kyushu, and ancient Korea.

The eventual triumph of the Yamato people in central Honshu did not mean that Kyushu lost its importance. As Cobbing points out, contacts with Korea and China, Japan’s nearest continental neighbours, were mainly concentrated in Kyushu. The administrative centre for Kyushu and for Japan’s foreign relations, such as they were over a thousand years ago, was established at Dazaifu, south of the modern city of Fukuoka. It was to Dazaifu that the renowned scholar Sugawara Michizane was sent as governor in 901. This was an important and prestigious appointment but was seen as exile from the centre of Japanese civilization at that time in the capital Kyoto or Heiankyo. Sugawara’s death in exile was thought to be the cause of various calamities and he was deified as Tenjin, the god of learning. His shrine at Dazaifu still attracts numerous pilgrims, especially at examination time by students seeking success in their exams.

As Kyushu became the gateway for trade with China and Korea, Hakata across the river from Fukuoka (the two cities are now joined) developed as a major mercantile centre, only to be overtaken in later centuries by Osaka and Edo. It came under the control of the Taira clan who were able to use the wealth of Hakata as a base for their growing power in the twelfth century. When the Minamoto defeated the Taira and the Kamakura Bakufu was established, Cobbing explains; “Hakata lost its status as the single designated gateway for vessels from overseas,” although it continued to flourish as one of the most important mercantile cities in Japan.

When the Mongols decided to try to add Japan to their conquests their first approach was to Kyushu. In 1268 a letter from Kublai Khan handed over in Hakata Bay was addressed to the “King of Japan.” This immediately raised a controversy. Was it the Mikado or the Shogun who should respond? As a result no reply was given. In 1274 a large Mongol force arrived in Hakata Bay and forced the Japanese defenders back. However a huge storm arose and the Mongol fleet suffered serious damage. In 1275 a further group of Mongol envoys reached Japan. They were sent to Kamakura where they were executed. In 1276 another invasion force was readied and attacks were launched in Hakata Bay, but they were beaten back. The Japanese authorities maintained for many years their vigilance against further Mongol attacks, although this never came.

Japanese contacts with China were interrupted after the failure of the Mongol attacks, but were not entirely broken off. In the fifteenth and sixteenth centuries Japanese ships and Japanese pirates from Kyushu sailed as far south as Annam [Central Vietnam].

Hideyoshi’s attack on Korea at the end of the sixteenth century was mounted from Kyushu and it was to Kyushu that Korean potters were brought. Kilns were founded by these Korean migrants at various places on the island and distinctive wares such as those of Satsuma and Karatsu were developed by Korean potters. Kyushu indeed became one of the most important areas for Japanese ceramics and in the seventeenth and eighteenth centuries ceramics from Arita such as Kakiemon were exported in large quantities by Dutch merchants and widely imitated in Europe.

The first westerners to reach Japan in the middle of the sixteenth century landed first on the island of Tanegashima, to the south of Kyushu. The Portuguese Jesuits began to seek converts in the island and Kyushu became their main base. The merchants who followed the missionaries naturally began to trade from Kyushu and it was to Kyushu that the English and the Dutch first came at the beginning of the seventeenth century. After the expulsion of the Portuguese and Spanish Catholics and the almost total suppression of Christianity in Japan following the Shimabara rebellion of 1637/8 the Dutch merchants were confined to the artificial island of Dejima in Nagasaki bay. Kyushu thus remained (throughout the Edo [Tokugawa] period) as Japan’s window to the world.

Kyushu played a significant role in the overthrow of the Bakufu and the Meiji Restoration of 1868. The Satsuma fief, with that of Choshu in western Honshu, played a dominant role in the revolution and samurai from Satsuma had leading roles in government and the armed forces, especially the navy in the new Japan. But the speed of change left many samurai poverty stricken and discontented. Kyushu became the focal point of disaffection. The Saga Rebellion of 1874 was easily suppressed, but the Satsuma rebellion of 1877, although it was eventually crushed, posed more of a threat to the new central government.

In the modernisation and industrialization of Japan in the late nineteenth century, Kyushu with its indigenous supply of coal and its ports, especially Nagasaki, attracted steel making and shipbuilding. Inevitably in the Second World War Kyushu was in the front line, especially as American forces approached Japan. The Yawata steel works, the first target of the Americans’ second atomic bomb, was obscured by cloud and Nagasaki, because of it shipbuilding works, was hit instead.

In the post-war era Kyushu has attracted a good deal of new investment especially in light manufacturing and tourism. It is the closest part of Japan to the Asian continent and as Cobbing rightly calls the island, Kyushu is the Gateway to Japan.

Cobbing has produced a well researched and readable study which is a valuable and necessary supplement to general histories of Japan. The 60 colour illustrations add significantly to the book’s appeal to the general reader as well as the academic student. Anyone planning a study tour of Japan should ensure that at least a few days are devoted to Kyushu where there is so much to see not only of scenic beauty but also of historic interest. This book is not a normal guide but it should be essential reading for foreign visitors to Kyushu.