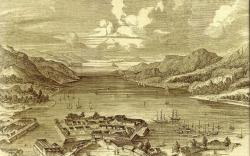 During the Edo period up to the arrival of Commodore Perry and his ‘black ships’ Nagasaki was the only port open to trade with China and, through the Dutch colony on the artificial island of  Deshima, with Europe. In 1858 it was the first of the Japanese treaty ports to ‘welcome’ foreign traders. It was soon overtaken as a trading centre by Yokohama and from 1868 by Kobe.   Hakodate, the only treaty port in Hokkaido, was more important as a refuge for whalers and for contacts with Russia than for commerce.  Nagasaki remained a significant trading port at least until the end of the nineteenth century and became one of Japan’s major shipbuilding centres. There was a British consulate in the city between 1859 and 1941 and as the list of British consuls in Nagasaki on pages 248-9 shows this was not seen by the British authorities as a backwater.

In addition to trade Nagasaki was one of the main tourist attractions for foreigners in the late Victorian period. It was generally the first port of call in Japan of ships coming from Europe and thus gave the globe trotters their first impressions of Japan.  Its climate was better than that of Shanghai and many foreign residents on the China coast would take their holidays in Nagasaki or in one of the hot spring resorts nearby. Nagasaki was also used by foreign navies on the China station and became a major coaling place.

To many foreigners Nagasaki is renowned as the location of Puccini’s Opera Madame Butterfly and of the novel Madame Chrysanthemȇme by Pierre Loti. Others will immediately recall the name of Thomas Blake Glover whom Alexander McKay, who wrote a biography of Glover, dubbed a Scottish samurai. But these are only three of the many colourful personalities who peopled foreign society in Nagasaki in the years covered by this interesting book. Although this book has the subtitle of ‘The British Experience’ it also covers the lives of many who were not British including Americans, Germans and French.

Burke-Gaffney has lived for many years in Nagasaki and is the outstanding foreign expert on the city.  His book adds significantly to the literature about life in the Japanese Treaty Ports. I hope it will be a forerunner of books devoted to the other treaty ports.

Burke-Gaffney has delved far and wide among the archives and has extracted much fascinating information. I rather regret, however, that he did not find space for Lord Elgin’s account of his visit to Nagasaki in 1858 on his way to Edo. Nor does he mention some other early British visitors such Captain Sherard Osborn who made interesting observations about Nagasaki prior to the fall of the Tokugawa. I particularly regret that no mention is made of Rudyard Kipling, who in 1889 was greatly charmed by Nagasaki, but this book is not an encyclopaedia of travel, but rather the portrait of foreign life in a Japanese city, now often only remembered in the West as the site of the second atomic bomb which devastated so much of the city and killed so many people.