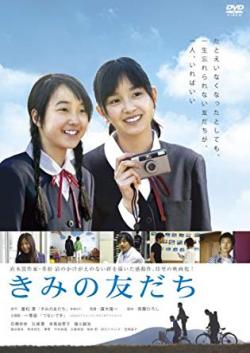 Your Friends is a powerfully touching, sentimental and naturalistic film which explores the depths of friendship.

One first encounters Emi and Yuka at school, in the excited lead up to a jump rope contest. Given the job of turning the rope for the contestants as neither can jump, the background to prickly Emi is slowly unraveled.

Emi is intrigued by Yuka, who is often absent from school as a result of a kidney condition which means long stretches away at hospital. One rainy day returning from school, Emi runs over to talk to Yuka only to be struck by a truck and crippled, forever to use a cane.

Interest in Yuka turns to hatred as a result of the accident, but Emi cannot fail to be won over by the sweet and caring Yuka, who remembers her birthday and tells her about the fluffy clouds painted on the walls of the children’s ward at hospital.

As the film beautifully evolves, we get glimpses of the few relationships which have defined Emi’s life, but the central one is undoubtedly the five year-friendship with Yuka. We learn all this intermittently and as a result of Nakahara, a twenty-something photographer who meets the older Emi, sensitively played by Ishibashi Anna (石橋杏奈), at a school for children with special needs where she volunteers. Compelled by her despite her initial coldness to him, he manages to elicit her confidence and draw her out.

That the bond between Emi and Yuka is enduring and symbolized by Emi’s quest to photograph the perfect fluffy cloud for Yuka, is an endearing testament to the strength of friendship.