How I Caused the Credit Crunch: An Insider’s Story of the Financial Meltdown 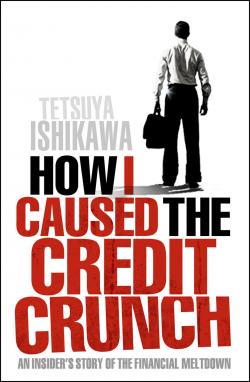 While this book is not directly about Japan and Tokyo is not at the centre of the narrative, the insights the Japanese author, Tetsuya Ishikawa, provides on the investment banking world are gripping.

You wouldn’t ordinarily pick up a book about the financial crisis on your summer holiday, but I made an exception for this book after reading the first page or two. Its factual and slightly fictional accounts of the underbelly of the investment banking world are entertaining and informative. While keeping the reader gripped with tales of sex, money and greed, the  book also deftly explains the intricacies of the arcane financial instruments which are now grimly associated with the credit crunch, all of which the author has had direct experience. It explains the crisis from a Joe Public’s view while not coming over too sympathetic for unemployed investment bankers.

In August 2008, Tetsuya Ishikawa was made redundant from his job at a global top-tier investment bank. [He was an investment banker at ABN AMRO, Goldman Sachs and Morgan Stanley.] The story is a fictionalized account of Ishikawa’s seven years at the forefront of the credit markets and an exposé of the human failings behind the credit crisis.

The main character and narrator, Andrew Dover, arrives on the scene fresh out of Oxford University. He soon finds himself in command of vast, unimaginable sums of other people’s money. A novice to the mysteries of hedge funds, subprime mortgages and CDOs, he nonetheless throws himself into the mad, decadent world of banking – awash with money, sex and greed. Soon he finds himself reaping the benefits in his colossal annual bonus and an international luxury lifestyle, fixing complex deals for billions of dollars in the exclusive bars, brothels, poker clubs and trading floors of London, New York, Frankfurt and Tokyo.

While some details and names have been changed, what makes the book exciting to read is the fact that the book is actually inspired by first-hand accounts of working at the cutting edge of the global economy from an individual with real insight into the financial world. [Tetsuya Ishikawa worked at the forefront of the credit markets, structuring, syndicating and selling credit derivative, CDO and securitization products to investors.]