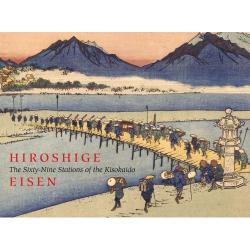 This book makes a valuable companion volume to the recent publication by Taschen of Hiroshige’s One Hundred Views of Edo which I reviewed in Issue 17 Volume 3 Number 5 (December 2008). The Taschen volume of upright prints was produced in full size reproductions of an outstanding set. This volume of oblong prints is based on a careful selection of fine early impressions. Anyone interested in the prints of Hiroshige or in Japanese landscape prints of the late Edo period will want to add this book to their collection.

The Kisokaidō, often referred to as the Naksendō (road through the mountains) as it traversed the mountains of central Japan, was an alternative to the better known and more travelled Tōkaidō (eastern sea road). It was longer and more difficult but passed through much fine scenery. It became popular with foreign travellers in the Meiji period who wanted to “get off the beaten track” but who had difficulty in getting permission to travel in the ‘interior’ of Japan away from the Treaty ports (see transcript of my lecture to The Japan Society on 16 June 1987 in Proceedings number 108 for 1987-8 pages 71-87) .

As Sebastian Izzard in his introduction explains this collection of prints by two outstanding artists of the late Edo period is “a tour de force of artistic vision and printmaking craftsmanship” and “comprises the artists’ most extraordinary and best loved landscapes, urban scenes and visual anecdotes.”   Yet most of these prints were not based on sketches made on the spot but rather on local guides. Neither Eisen, nor Hiroshige, seems to have thought it necessary or even desirable to journey along the road and observe the actual scenery for themselves.

This series was started by Eisen in 1835. He worked chronologically producing a print for each station up to Honjo, the eleventh, and then arbitrarily selected stations further along the route which attracted him, producing a total of 24 prints. Eisen who had an element of artistic genius, also seems to have been both eccentric and an alcoholic.  Perhaps because he was so unreliable he was replaced by Hiroshige who did a further 46 prints to complete the series. Izzard notes that Eisen was generally more interested in the human element than in the view itself. “Hiroshige, on the other hand, sheds his earlier reliance on guidebooks and local customs to create sweeping compositions with stunning bodies of colour designed to reflect the atmosphere of each locale in the moment he portrayed it.”

Among the most striking of the prints in this volume are prints depicting people and places in the dark or in the rain. The use of dark blue in many of the prints is noteworthy.  Izzard notes that “the boom in landscape prints in 1830s had been fuelled by the sudden and widespread availability of the imported synthetic blue pigment known as bero-ai, named after Berlin, the capital of Prussia… A fad for blue prints (aizuri-e) developed, and fostered a demand for landscapes printed in shades of blue.” Perhaps the most noteworthy general features of these prints are the imaginative manner in which each scene is composed and the way in which vibrant colours are artistically blended. These were the elements which so impressed and inspired the Post-Impressionists.

Each print is accompanied by a detailed note about the content of the picture and information about the impression. It is interesting to note the way in which signs are used in some of the prints to advertise the publisher or various products.

A few of the prints in this series are well known because they have featured in books about Japanese prints and Japanese artists, but many will be known only to specialists. In going through this work I noted many that were unfamiliar to me and a number which I thought particularly attractive and impressive. I must leave it to readers to make their own choice as there is no space in a brief to reproduce even a small selection of the prints.