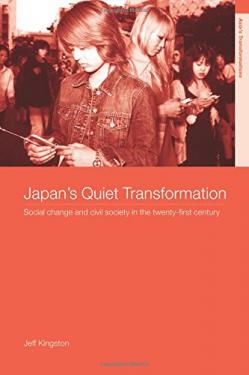 In this stimulating book Jeff Kingston meticulously examines many of the social, political and economic changes that have buffeted Japan for more than a decade and are drastically reshaping its fundamental nature. This insightful and excellently researched work attempts to make sense out of a host of diverse trends and predict their possible impact on the shape of Japan to come. It challenges the dominant Western media view of Japan as a nation adrift, doing too little too late to cope with its chronic economic problems. The author confesses, "I wrote this book because so much of what is happening in contemporary Japan is not accounted for in the relentlessly pessimistic prose and stagnant images that dominate media and academic writing, both domestic and international."

Kingston, a professor at Temple University in Japan, argues that since the late nineties a series of legal and institutional reforms have been laying the groundwork for a more robust civil society to emerge. He boldly declares, "The foundations of civil society are being laid on the rubble of Japan, Inc." The author believes legislation facilitating the establishment of Non-Profit Organizations in 1998 was a milestone that combined with better information disclosure and a comprehensive overhaul of the legal system are mutually reinforcing each other and spurring other significant developments which are profoundly altering the relationship between ordinary citizens and those who govern them. Although the process is gradual and incremental, it is reinvigorating civil society, generating the "quiet transformation" of the title.

The book argues that we should not overly focus on what Japan still has to accomplish, but instead concentrate on "the magnitude of what has already been achieved." Using this formula, Kingston reveals "the tectonic shifts in economic practices and policies over the past decade" that have resulted in what the book says is an amazing metamorphosis.

It is undeniable that some Japanese economic practices which were long taken for granted such as full employment, job security, seniority wages, and the concept of corporate centered welfare are now what the book terms "fading vestiges of a system that has soured." Indeed, a quick flick through any newspaper shows that corporate Japan no longer enjoys the trust and loyalty it once commanded.

Japan Inc. has shed paternalism, made employment much less secure and eroded its once high moral standing with well-publicized ethical breaches and numerous scandals. Whistleblowers have also cast light on a wide range of dubious practices further adding to the deep sense of disillusionment.

Issues that were previously considered taboo have now become the subjects of vigorous media scrutiny and heated public debate. For example, the murky connections between Japanese gangsters, politicians and bureaucrats are frequently splashed across the press.

Kingston argues that the loss of economic security and stability has produced a deep sense of social dislocation which is radically changing the way people see society and transforming the way various parties interact. These are enormous changes which will eventually become more prominent with time.

The family, society's basic unit, is also going through a phase of tremendous change. The so called traditional notions of stable, harmonious family life have been virtually demolished by surging divorce rates, the "discovery" of many cases of domestic violence and child abuse, a huge upswing in suicide rates, and a substantial weakening of formerly rigid gender roles.

The author attempts to draw all these social, political and economic stands together in a coherent whole. He believes a great deal can be learned from examining how a variety of groups and individuals are responding to the host of challenging issues facing the nation.

Kingston produces a raft of data to show that ordinary people are now less submissive to those in authority and much better informed about their rights, a process which a more aggressive media is helping to accelerate. He demonstrates that greater government transparency and accountability have already increased participation in NPOs and other voluntary activities.

However, despite these positive developments, the author concedes that progress towards creating a more vibrant civil society is slow and serious impediments still remain. He argues that social transformation does not happen on a fixed schedule, it is quiet, gradual and cumulative. This means that the ongoing changes he outlines sit uncomfortably next to, and sometimes in the shadow of, prominent continuities. This he says creates the impression, most frequently found it the Western press, that nothing substantial is actually occurring. The author reasons there is always a time lag between reform initiatives and substantive consequences.

It is this glaring perception gap that critics of Kingston's analysis are most likely to home in on. They see nothing but empty reforms, moribund politics, economic deadlock and social stagnation, where Kinston sees the genesis of a nascent new Japan. However, skeptics will nevertheless find his detailed and well-researched analysis stimulating, even if they disagree with its conclusions.

Kingston writes, "Japan in 2004 is very different from the way it was in 1989; from a historical perspective fifteen years is a small blip of time and in this brief moment many of the seemingly ineradicable verities and practices of Japan have been unalterably transformed."

There is certainly no denying that astronomically high divorce rates, anemic marriage rates, plummeting birthrates and a rapidly aging population are transforming Japan on a fundamental social level. It is whether these powerful social forces and other significant developments are also radically altering the economic and political landscape that is the question. This is the most contentious aspect of Kingston's thesis and one on which the jury remains out. It's a question only the coming decade will answer, making this book a worthwhile read for anyone interested in how the next ten years might unfold.