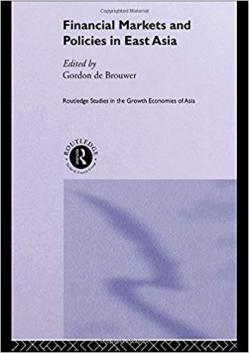 This book is based on the papers first presented at a conference held at the Australian National University in September 2000, sponsored jointly by the University and the IMF. The conference focused on recent changes in monetary and exchange rate systems as well as financial policies in East Asia since the East Asian crisis in the late 1990s.

All the chapters in this book are based on sound empirical analysis and solid data, and most of the debating issues on the Asian financial crisis are properly covered. Especially useful are an introductory review by Gordon de Bruower in Chapter 1, a microeconomic analysis of the financial and corporate sectors by Masahiro Kawai in Chapter 5, and a macroeconomic analysis of policies and exchange rate regimes by David Nellor in Chapter 8, which together give us a comprehensive account of the East Asian crisis and its recovery as well as its future prospects.

Probably the most interesting chapter, however, is Eisuke Sakakibara's "Subregional currency union? Japan and Korea" (Chapter 13), where "Mr. Yen" tries to explores a possibility of finding an optimal currency regime at least in the short or medium run, if not in the long run, such as a common Asian currency or a currency union between Japan and Korea, for example. "A stable and mutually acceptable yen/won rate would boost industry performance and could encourage mutually beneficially joint ventures and mergers and acquisitions. There has been a proposal to establish a free trade agreement (FTA) between the two countries and a yen/won agreement could take place in tandem," says Sakakibara. In this connection, one might find it interesting to read Yoichi Okita's article, "Japan needs more free trade agreements.": Click here

In a somewhat different context, an Australian-New Zealand currency union is also discussed by Mark Crosby and Glenn Otto in Chapter 14. For a comprehensive discussion on Japan-Australian relations, see Toyoo Gyohten's article, "Waves on globalization, how Japan and Australia should respond.": Click here

A list of contents in this book is as follows: (1) Debating financial markets and policies in East Asia by Gordon de Brouwer; (2 ) Recent development in Asian financial markets by Dominic Wilson; (3) Patterns of bank intermediation and structure: a Korean perspective by Sang Whan Kim, Haesik Park, Hae Wang Chung; (4) Private capital flows in East Asia: boom, bust and beyond by Ramkishen S. Rajan and Reza Siregar (5 ) Bank and corporate restructuring in crisis-affected East Asia: from systemic collapse to reconstruction by Masahiro Kawai; (6) The boom, bust and restructuring of Indonesian banks by Mari Pangestu and Manggi Habir; (7) Financial market liberalisation and economic stability in China by Fan Gang; (8) Securing consistency in macroeconomic policy by David Nellor; (9) Fixed or floating: is it still possible to manage in the middle? by Reuven Glick (10) The viability of inflation targeting for emerging market economies by Guy Debelle; (11) Comparing monetary policy operating procedures in Indonesia, Korea, Malaysia and Thailand by C.E.V. Borio and Robert N. McCauley; (12) Does a formal common-basket peg in East Asia make economic sense? by Gordon de Brouwer; (13) Subregional currency union? Japan and Korea by Eisuke Sakakibara; (14) An Australia-New Zealand currency union by Mark Crosby and Glenn Otto