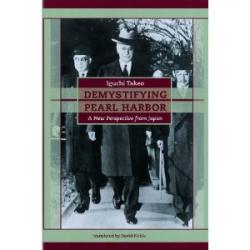 “This is an extremely valuable addition to the literature on Japan’s Pearl Harbor attack” declares Professor Akira Iriye of Harvard University in his foreword to this English edition of Kaisen Shinwa [開戦神話], published by Chūō Kōen Shinsha in 2008.  The author in his preface acknowledges the help of such British scholars as Ian Nish and quotes from Antony Best.  It is based on considerable research into the original documents and personal knowledge of some of those involved on the Japanese side. It a fascinating account of the events leading up to the Japanese attack on the United States and Britain in December 1941 and is essential reading for anyone interested in the origins of what the Japanese refer to as the Pacific War.

The story begins with Iguchi Takeo’s boyhood in Washington where his father was Counsellor to the Japanese Embassy at the outset of the war.  It recounts the internment of Japanese officials in the United States in conditions, which compared favourably with those applied to American and British diplomats in Japan, and their return to Japan via Lourenço Marques and Japanese occupied Singapore.

The book then discusses the growing tension between Japan and the United States and the Sino-Japanese War. Iguchi declares: “In a nutshell, the foreign policy pursued by Japan in 1940 and 1941 was inconsistent, unsteady, and a bit haphazard (page 51).”  Before December 1941 the focus of the Japanese military was on China and the threat from the Soviet Union. The “liberation and independence of Southeast Asia” did not become a Japanese war aim until after Pacific War had begun but was seized on as a propaganda justification for Japanese attacks in Southeast Asia.

Iguchi does not accept the thesis that American economic sanctions against Japan coupled with American demands for a complete withdrawal of American forces from China and the abrogation of the tripartite pact with Germany and Italy forced Japan into war. But he notes that Tōjō had asserted that if Japan were to withdraw from China, “four years of blood and sacrifice…would be for naught.” It would have been practically impossible for the Japanese military to accept withdrawal from China unless they had been forced into this by an effective embargo or by military defeat.

Were the Japanese military then set on war with the United States and Britain?  Iguchi quotes the War Diaries of Imperial General Headquarters which indicated in November 1941 that the Army planners “were developing a strategy seeking military supremacy by lightning assaults at multiple points against Anglo-American forces that were neither expecting nor prepared for immediate combat (page 67).” In other words they thought that the only way in which Japan could win a war against the United States and Britain with their greater resources was by a quick and devastating surprise attack and were planning to repeat their strategy in earlier wars such as the Sino-Japanese war of 1894/5 of attacking before declaring war.

Were then the negotiations in Washington between Ambassador Nomura and US Secretary of State Cordell Hull just an elaborate charade designed to deceive the Americans about Japan’s real intentions?   Iguchi does not think so. There were influential elements in Japan which sought to find a way out of the impasse. Ambassador Nomura was not a party to the strategy of a surprise attack, but “was destined to be used as an unwitting tool in a diplomatic plot  (page 105).”

The author does not accept the thesis that there was an American conspiracy to provoke Japan into war. “The American approach was to create a modus Vivendi and the Hull Note of 26 November 1941 was designed to be a proposal for a permanent accord (page 133).”  It was not in Iguchi’s view a “de facto ultimatum” as some Japanese have argued and intended to be the starting point for negotiations. The author notes in this context that on the day before the Hull note was delivered “the Japanese carrier strike force…was steaming towards Pearl Harbor (page 138).” The momentum for war if not unstoppable was immense.

Iguchi devotes part IV of his book to a discussion of the nature of the final Japanese memorandum and its delayed transmission. He argues, I think convincingly, that the delay in handing over the Japanese note to the Americans was not due to incompetence on the part of the staff of the Japanese Embassy in Washington, but was due to the deliberate holding up of transmission of the concluding part of the memorandum by the Communications Section of Army General Staff (page 259). The allegations against the Washington Embassy appear to have been made in an attempt to absolve Tōgō Shigenori, the Japanese Foreign Minister, and Gaimusho officials such as Kase Toshikazu for their part in the Japanese deception strategy.

Iguchi discusses and has no difficulty in rejecting the various conspiracy theories. One of the myths is that Roosevelt knew in advance of the attack on Pearl Harbor and allowed it to happen without giving the US Navy warning on the grounds that this would make war between Japan and the US unavoidable. Another is that Churchill was responsible!

Iguchi deals briefly in chapter sixteen with the Japanese attack on British forces and possessions in the East before war was declared.  In this case there was no need for delay tactics in transmitting a final memorandum.  When Sir Robert  Craigie, the British Ambassador to Japan, met the Japanese Foreign Minister early in the morning of 7 December 1941 the Japanese forces had begun their attacks on British forces, but he said nothing of these attacks and the British were not informed that war had begun until later that morning.  Japan Society readers will find an interesting account of these events in Chapter 47 of Britain and Japan: Biographical Portraits Volume VII to be published in the early autumn of 2010.  This is by Douglas Busk, who was head of chancery in the British Embassy in Tokyo at that time, and is entitled a “Disorderly Upside Down Affair.”