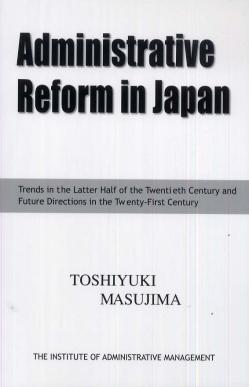 To properly understand Japan's spectacular postwar economic transformation and its subsequent struggled to adjust in the post-bubble nineties, it is vital to grasp the administrative dynamics which uniquely underpinned its economic success and are determining its future. This book is an enlightening overview of the major administrative reforms spanning the early postwar years to the present day. It explains the significance of all the main changes that have shaped Japanese government and seeks to rank their individual importance. In this context, the reform policies initiated by Prime Minister Ryutaro Hashimoto (1996-98) receive the highest rating and are singled out for particular praise.

The author, Toshiyuki Masujima, is a former high-ranking bureaucrat who became an academic after retirement. Occupying these dual realms allows him to offer a rare academic-insider's perspective on some of the key reforms of the postwar era. The book greatly benefits from the fact that the author personally knew and closely worked with many of the key political reformers of the last decades, including former Prime Ministers Yasuhiro Nakesone, Morihiro Hosokawa and Ryutaro Hashimoto.

The author was at the very heart of some of the major postwar reforms, which elevates the insights of his analysis far beyond that of a normal academic study and provides truly unique angles on how key reforms evolved and the forces which ultimately forged their final forms. The study is also especially valuable because it is one of the few English language books on administrative reform written by a Japanese scholar.

While the author meticulously charts the evolution of administrative reform in the latter half of the last century, his prime objective is to highlight the significance of the so called "Hashimoto reforms," which trace their origins back to 1996. By placing these reforms in their proper context, it becomes possible to appreciate their "revolutionary" aspects and better comprehend their likely long-term impact on Japan.

The analysis begins with an examination of why the first Provisional Commission on Administrative Reform (Rincho I) was established in 1961, its aims and eventual impact. Likewise, the second Provisional Commission on Administrative Reform (Rincho II) of Prime Minister Zenko Suzuki in 1981 is skillfully dissected, furnishing the reader with a comprehensive overview of their characteristics and accomplishments. This creates the necessary benchmarks with which to compare and assess the reforms started under Prime Minister Hashimoto in 1996 and continued under his successor Prime Minister Keizo Obuchi.

The Hashimoto reforms finally came into effect on 6th January 2001 when among other things the number of central government ministries were reduced by half and the framework upon which Prime Minister Junichiro Koizumi would later develop his own reform drive were established.

This is a well-written and superbly researched book in which Professor Masujima provides a clear step-by-step analysis of Japanese postwar administrative reform and the relative importance of each one. There are many easy to follow charts which summarize the key developments and fact-packed appendices. The footnotes also deserve a mention as they are laced with gems of information that only an insider would have access to and enhance the analysis in the text. This book is a valuable resource and contributes to our understanding of how Japanese government functions.