Representing the Other in Modern Japanese Literature: A Critical Approach 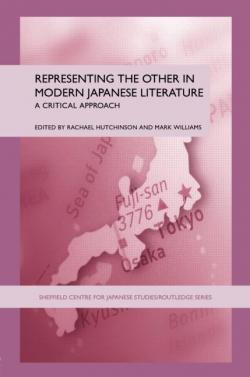 Identity is the product of the process of associations and dissociations that simultaneously shapes and is shaped by social and discursive practices. As such, self-definition is often posited in the binary structure of phenomenology, with a Self that engages in an ongoing dialogue and negotiation with an Other. As editors Rachael Hutchinson and Mark Williams note in their introduction to Representing the Other in Modern Japanese Literature: A Critical Approach, a new substantive volume in the discussion on Japanese identity, "We define one thing in terms of another thing, or indeed in terms of a 'not-thing,' in order to seek some kind of truth as to the essence of the thing defined" (page 3). The Self and the Other are thus symbiotic agents in the formation of identity which are at times complementary and inclusive and at other times contrasting and exclusive. The fluidity and complexity of the Self and Other relationship is what invites attention and interrogation, or as Hutchinson and Williams explains, "Rather than speaking in terms of a binary system of two opposed singular entities, therefore, we must speak in terms of negotiation, blurred and shifting boundaries, and conclude that it is in the process of contact, observation, and representation that identity is defined" (page 7). The goal is to advance the discussion of identity from a reductive and essentialised understanding of the Self and Other to a nuanced exploration of their dialogic relationship.

The product of this endeavour is Representing the Other in Modern Japanese Literature: A Critical Approach, a collection of essays by a select group of accomplished Japan scholars analysing the narrativisation of the Self and Other by various Japanese writers of the twentieth century, with a particular focus on how these constructions are mediated by socio-political contexts at various junctures in Japan in the last century and these writers' personal persuasions and experiences. These essays tease out the motivations that drive the deliberate (dis)associations with the Other crafted by Japanese authors and how the Japanese identity is molded by the intersubjective contestations between the Self and Other.

The Japanese authors whose works are studied in this volume range from those whose names are familiar to western readers, such as Natusme Soseki and Yukio Mishima, to those not so well-known outside of Japan, such as Kajii Motojiro and Oshiro Tatsuhiro in order to show what Hutchinson and Williams have termed, "the wide spectrum of writers engaged in the critical apprehension of the Other" (page 9). The essays in this volume reveal how the malleable Self and Other are shaped by a confluence of issues ranging from gender, race, (post)colonialism, orientalism, modernity, national identity, power dynamics, to materiality and spirituality. Underpinning these essays is Michel Foucault's theory of discursive power which asserts that power and knowledge is manifested through the language of creation and Jacques Lacan's theory of unfulfilled and fragmented yearning for the other, whereby the imagined Other becomes a Doppelgänger of the Self's own desires and uncertainties.

Irmela Hijiya-Kirschnereit's essay "Hermes and Hermès: Othernesses in modern Japanese literature" and Susan Napier's chapter entitled "Meet me on the other side: Strategies of Otherness in modern Japanese literature" are fitting works to initiate this discussion on the Self and Other as the former provides a necessary discussion on how Japan's encounters with foreign cultures (from Chinese to American and European) developed concepts of Otherness in Japanese literature and the latter engages issues of gender tension, division and unity of the Self and Other, and the permeability of the boundary between Self and Other. These ideas form the foundation that the remainder of the book rests on, which is divided into three parts, each engaged with a particular category of "Other."

Part I concerns "The Outside Other," which focuses on the conceptualization of foreign others by Japanese writers who were traveling abroad such as Nagai Kafu, Tanizaki Jun'ichiro and Yokomitsu Riichi. Rachael Hutchinson's discussion of Nagai Kafu's Tales of America, Adrian Pinnington's essay on Tanizaki Jun'ichiro's relativisation of orientalist paradigms, and Stephen Dodd's exploration of Kajii Motojiro's negotiation of Selfhood in the face of encroaching western influences show how the Western Other is used as a trope through which power, freedom, agency gender roles, and colonial legacy are negotiated by the Self and Other. Furthermore, Japan's ambivalence towards its identity vis-à-vis the foreign Other is revealed in Douglas Slaymaker's analysis of Yokomitsu Riichi's works, which demonstrates how "Japan oscillated between its identity as a colonizing imperial power even as it was a member of a subjugated, colonized Asia" (page 111). In some cases, the foreign Other is a symbol of advancement and freedom that juxtaposes against Japan's restrictive Confucian world-order; while in others, it is a metaphor for the anxieties of modernity that are overtaking traditional Japanese society. In all cases, however, the foreign Other functions as a mirror for self-reflection and self-critique for the Japanese Self.

Part II is focused on "The Other inside Japan," which deals with those who are considered Japanese but who perceive themselves on the periphery of the Japanese society, such as the burakumin (whom Mark Morris calls "Japan's invisible minority" (page 128) and the hibakusha (the atomic bomb survivors). Mark Morris and James Raeside's respective analysis on the treatment and representation of the burakumin alterity in Shimazaki Toson and Noma Hiroshi's works highlight the othering process existent within the Japanese society and interrogate the constitution of the Japanese Self. David Stahl's analysis of Oe Kenzaburo's reconstitution of the postwar identity of the hibakusha further questions how the progressively reified hibakusha became "objects of political manipulation and contestation" (page 213) and how "self-serving conflation of collective Self and Hiroshima Other" (page 212) gave voice to the myth of national victimization. The perennial struggles by the burakumin to gain acceptance and agency in the wider Japanese society, often by effacing their own identity, reveal the cleavages within the Japanese Self just as the construction of the hibakusha as an abstracted symbol of the victimized Japanese Self functions as a manifestation of Japanese wartime and postwar ideology and politics. The soul-searching regarding Japan's role during and after World War II is further elucidated in Mark Williams' essay on the works of Shiina Rinzo, who is traditionally recognized as the representative writer of the Sengoha (après guerre) literary coterie. According to Williams, the legacy of Sengoha's literary texts is best assessed as the voice of the Japan's marginalized and oppressed working-class masses. Namely, Sengoha's most enduring contribution is "the concomitant vision of otherness as a more positive element, as a liberating concept, one in which difference is celebrated and in which the existence of such an opposition can be used as a means of positive affirmation as opposed to negative rejection" (page 238). The essays in this section direct attention to not only the complicity and culpability of the Self in the formation of these various constituents of the Internal Others, but also (and perhaps more interestingly), to how the emerging agency and empowerment of the Internal Other complicates the Self.

Part III analyses "The Complicated Other of the Liminal," those who weren't Japanese but were forced to become Japanese as a result of Japanese colonialism in Asia, such as the Taiwanese, Koreans, and Okinawans. The liminal Other are those who occupy the middle ground and question whether the Other can ever become the Self. Leith Morton examines the Okinawan Other through yuta, the mantic female (shamans), in Oshiro Tatsuhiro's fiction and concludes that "Okinawa and its culture became an 'other' inside Japan, a mirror in which the Japanese could re-envision and re-interpret their own cultural and literary tradition" (page 257). Similarly, Cahterine Ryu asserts that Yi Yang-Ji's texts show how "the presence of zainichi Koreans has necessitated a more finely calibrated notion of 'Japaneseness,'" and that "at the level of perception, zainichi Koreans confound the very physical and linguistic distinction between the Japanese Self and the Other" (page 313). Using Sato Haruo's writings as examples of how the Japanese marginalized the Taiwanese with a constructed "primitiveness," Faye Yuan Kleeman illustrates how "Japanese colonialism is founded upon a Japanese brand of 'Orientalism' that turns against its Asian neighbors the superiority of a Western modernity that it had only recently acquired for itself" (page 272). The liminal Other thus becomes a vehicle to challenge the notion of a monolithic Japanese Self as well as a driving force in the hybridization of the Japanese identity.

An interesting motif found in all three parts of this volume is the use of the female as a site for identity exploration. Susan Napier introduces a vision of the female extrapolated from Natsume Soseki's works as "an uncanny repository of the past" and "a mediator to an Other world that the contemporary male can no longer penetrate" (page 41). Rachael Hutchinson analyses how feminist readings of Nagai Kafu's narratives wade into implications of power relations between men and women and how the domination and submission in these relationships are "read as metaphors for racial domination, colonialism, and slavery" (page 59). Rebecca Copeland discusses how the rendering of the Japanese female into a marginalized Other is subverted by the female protagonist in Uno Chiyo's epistolary work, who "uses her pen not only to bridge the gap between herself and her husband, but to reaffirm, to rewrite herself" (page 178). Leith Morton expands on the agency of Oshiro Tatsuhiro's yuta in re-asserting the Okinawan identity against the double-coloniality of Japanese control and American occupation. Faye Yuan Kleeman reads the Taiwanese female protagonists in Sato Haruo's fiction as a symbol of a "modern protest against the feudalistic disencranchisement of women." These examples are only a handful of the unique and thought-provoking themes on women found in Representing the Other in Modern Japanese Literature: A Critical Approach. The richness of this topic justifiably argues for an independent section of "the Female Other." Perhaps the readers will be privileged to an expanded edition including such a section in the near future.

The textualisation and contextualisation of the Other is brilliantly and convincingly argued in Representing the Other in Modern Japanese Literature: A Critical Approach, enlightening the readers to not only multiple interpretations of the Other but the elasticity of the Self as well. Taken together, the essays in this volume successfully persuade the reader to view identity as a process of "becoming" rather than of "being" and recognize that identity is a shifting consciousness conditioned by the interaction and negotiation between the Self and Other. This delightfully well-written book is a highly recommended reading for all students of Japan studies.