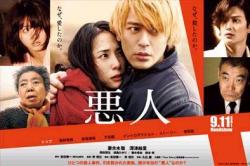 It is five years since the release of Sang-il Lee’s hugely enjoyable Hula Girls [read our review on issue 11], a Full Monty-style feel-good film replete with social commentary and the only one of his works I’d seen. I was, naturally, looking forward to Akunin [Villain], an altogether different type of film for a more mature audience perhaps. It is a film about loneliness, the desperate longing to be loved, the pain and fear of losing love and the ambivalence of good and evil. Not quite as sophisticated or as subtle as it could be, it is, nonetheless a fine though bleak and disquieting film to watch and ponder. The acting is universally good and the shots of the Kyushu countryside are breathtaking. A plot spoiler follows!

Given the title I was on the lookout for the villain from the start. The first character to be introduced is steely-faced Yuichi Shimizu [清水祐一] sporting dyed blond hair and watching a raunchy video while having his car filled up at a petrol station. Too easy to identify perhaps and though wavering in my conviction at times, my instinct was spot on.

Various characters are introduced as the film progresses; Yoshino Ishibashi [石橋佳乃], a coquettish young insurance saleswoman who lives in Hakata, her young female co-workers, Yoshino’s father who wishes she still lived at home with his wife and him, and Masuo Keigo [増尾圭吾], a playboy who irritates from the start with his misplaced arrogance and distinct lack of empathy.

Yoshino is seen to regret her relationship with Yuichi, a Nagasaki-based labourer who, since making her acquaintance online, has been occasionally driving 1.5 hours to see her in Hakata however. Yoshino, however, has set her sights on Masuo.

Having agreed to meet Yuichi after dinner one night but accidentally bumping into Masuo, Yoshino coerces the latter to spend time with her. She makes her excuses to Yuichi who’s in his car, asks him to wire her money and drives off with an unwilling Masuo in what will be an eventful trip.

At this point, surprised that Yoshino is receiving money from Yuichi, I was alarmed at the rage and speed with which he pursues the unlikely couple in his car. A sequence later, Yoshino’s bruised corpse is found down the wayside by Mitsuge Pass.

Avoiding the police, Yuichi seeks refuge in kind, unquestioning, understanding Mitsuyo [馬込光代], who he’s also met online and in person for the first time soon after Yoshino’s death. Mitsuyo is a lonely woman from Saga who works in a men’s clothing shop and feels that her life is at a dead-end. Yuichi wishes he’d met her earlier.

Trusting her compassion, he confesses to having killed Yoshino on finding her seemingly vulnerable at Mitsuge Pass. Yuichi admits to the rage he felt at being ditched for Masuo and at Yoshino’s spiteful words; refusing a ride home with him she shrieks that she will frame him with kidnapping and raping her.

Mitsuyo and Yuichi hide in a lighthouse. It is unnerving to see the susceptible Mitsuyo with taciturn, odd Yuichi. There is no accounting for taste and it is impossible to fathom what she sees in Yuichi other than that he is a man, any man to make up for her searing loneliness.

“Being with you is so painful,” says Yuichi, similarly never having experienced a woman’s love or tenderness and being terrified of losing it now.

As the police zone in on the fugitive pair in the lighthouse, I again doubted my burgeoning hunch that Yuichi had any redeeming qualities, but maybe it was Lee toying with our emotions and rationality once again.

Akunin’s main competition at this year’s Japanese Academy Awards was Confessions [see our review in issue 32]. Though some of the characters in Akunin were morally dubious and included a killer, those in Confessions plunged the depths of sheer evil.