Reimagining Japan The Quest for a Future That Works 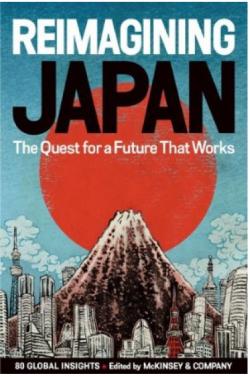 This book brings together essays about Japan and its future by almost ninety different authors. The non-Japanese authors include journalists such as Bill Emmott, academics such as John Dower, Gerald Curtis and Ezra Vogel, authors such as Ian Buruma and Pico Iyer, investment analysts such as Peter Tasker and Jasper Koll, as well as industrialists such as Carlos Ghosn, CEO of Renault-Nissan.  Japanese authors come from all walks of life; industrialists include Masahiro Sakane, the chairman of Komatsu, Yasuchika Hasegawa, the CEO of Takeda,  Motoya Okada,  the president of AEON, Masayoshi Son, the CEO of Softbank, plus writers, journalists, and sportsmen.

The chapter headings include some all embracing themes such as “Renewal” “Rethinking Japan’s Past – and Future,” “Restructuring Japan INC.” and “Re-engaging with the World.”  It is perhaps inevitable that with so many authors and themes the book is a pot-pourri and there is good deal of repetition.

While there is fairly general agreement on the need for change and new leadership there is no consensus on how change is to be achieved.

The introduction by Dominic Barton sets out the main themes.  Many of the contributors note the reluctance of young Japanese “to venture outside the safe cocoon of Japan.” The Tohoku earthquake and the subsequent tsunami and nuclear disaster must surely have shaken the idea that Japan is such a safe place: the disasters could act as a catalyst for change.

Japan still lacks the necessary openness to the outside world and there are signs that the sakoku [鎖国] mentality has not disappeared. Japanese continue to see themselves as unique. This belief seems to lie behind what has been called the “Galapagos Syndrome” which has led some companies to make products for the Japanese market which do not conform to international standards.

Glenn Fukushima in an essay entitled “Unlocking Sakoku” notes that “Japan has the lowest level of inward foreign-direct investment in the OECD – by far.” Tadashi Yanai, president of Fast Retailing, declares that “My Advice to young people is simple: get out of Japan.” But will they? Masahiro Yamada points out in an essay entitled “The Young and the Hopeless” that “eighty percent of unmarried Japanese between 18 and 35 live with their parents.” Bill Emmott in his essay headed “A Tale of Two Futures” thinks that “a quiet life amid genteel decline could look tempting to many Japanese.”

Many contributors are concerned that Japan’s education system does not encourage creativity and innovation. Kazuhiro Fujihara, who came from business to serve as a principal in a Japanese junior high school, declares that “Japan is still educating children as it did fifty years ago.”  Japanese universities are no longer among the best in the world.

Apart from more openness Japan needs to become more diverse.  Japanese codes of conduct designed to preserve harmony helped Japanese people to endure the recent disasters. But “homogeneity can also be a disadvantage.”

The standard of English in Japanese companies based in Japan is comparatively poor. “Japanese companies do not reward staffs for their overseas experience or qualifications and do not compete effectively to recruit the ablest from abroad.”

Japanese companies do not make good use of Japanese female talent.  William H. Saito points out in an essay on “Expanding Japan’s social capital” that “women hold a minuscule 1.4 per cent of the board seats in Japan’s leading companies, less than in Oman, Jordan and Kuwait.”

Japanese are proud of their manufacturing expertise, but Japan can no longer compete in labour-intensive industries. The productivity of Japanese service industries is low and as one economist points out “such inefficiency saps competitiveness.”

Richard Katz considers that a fundamental issue holding back change is that “In Japan a workers primary social safety net is his job. That creates tremendous political pressure to keep moribund and mediocre firms going.”

In a chapter entitled “Japan’s Globalization imperative” three authors point out that “Japan accounted for 35 percent of the Fortune Global 500’s revenues in 1995 – and only 13 per cent in 2009,” but they assert that “the sleeping giant that is Japan Inc has begun to awaken.”

Many authors bemoan the failures of Japanese politicians to provide adequate leadership.  Changes must be made and can be made as was demonstrated so clearly in the Meiji period. The message is not new but weak governments and inflexible superannuated leaders have lacked the necessary sense of urgency.

Ordinary Japanese are increasingly dissatisfied with the status quo and a few realists, ready to confront the old guard, may now be coming to the fore. Gerald Curtis declares that “The daunting reality is that Japan’s political system is in the midst of a period of ‘creative destruction.’” He notes that the “close government-business relationship no longer exists.’ Fortunately Japanese companies are no longer willing to accept old-style administrative guidance.”

Japan’s demographic problems are highlighted by many contributors. Various measures to deal with the ageing society and a declining population are discussed, but none seem likely to reverse current trends. Jasper Koll asks: “Can it be that the combination of demographic destiny, entrenched vested interests, and cultural stubbornness leaves no other outcome but the relative and absolute decline of a once great national economy?” But he and others are reluctant to be too pessimistic.

Klaus Schwab reminds us that “twenty-one percent of patents granted in the US in 2009 were from Japan – equivalent to the shares of Germany, South Korea, Taiwan, Canada, United Kingdom, France and China combined.”  Stephen S. Roach thinks that “corporate Japan has finally come to grips with tough competitive challenges,” although he notes that “gains in total factor productivity averaged just 0.2 percent per year from 1991-2000, down from the 2.4 per cent average from 1983-1991.”

The nuclear issue features in many essays. The Fukushima disaster has exacerbated Japan’s nuclear allergy.  Solar power and other alternative methods of generating power can be harnessed but without nuclear Japan will be unable to meet its climate charge targets.

Some contributors focus on foreign policy issues including relations with the US and with China. Hitoshi Tanaka in an essay “Forging partnership with China” points out that “Japan is becoming less important to China, while China is becoming more important to Japan.”  In an essay entitled “The Diplomacy Deficit” Paul Blustein takes the view that “Repeated bouts of economic recession and stagnation over the past two decades have sapped Japan’s already modest capacity for exerting influence overseas…Nowhere is Japan’s relative weakness more evident than in the WTO (World trade Organization).”

The overall message of this thought provoking collection of essays is that while the challenges facing Japan are daunting the future need not be as bleak as Japanese demographics suggest.  The non-Japanese authors sometimes seem more optimistic than some of the Japanese contributors. Japan clearly has many friends overseas.