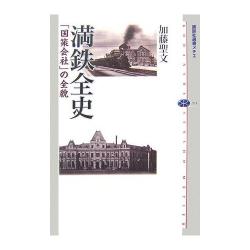 The year 2006 was the 100th anniversary of the establishment of “Mantetsu” [満鉄], or “Minami Manshu Tetsudo Kabushiki-kaisha,” [南満州鉄道株式会社], in English the Southern Manchurian Railways Company, a semi-public corporation that was far more than a railway corporation. Born as a by-product of Japan’s victory in the Russo-Japanese War of 1904 to 1905, it had a profound economic and political impact on the region’s development and the outcome of World War II in Asia.

Mr. Kiyofumi Kato, a Ph.D. candidate at Waseda University, specializes in modern Japanese history and is a research fellow at The National Institute for the Humanities [人間文化研究機構]. His book on the Mantetsu is highly readable and backed by solid research into extensive primary sources as well as academic papers and secondary source publications. It includes several maps, many photos, a detailed chronology, a complete list of managers under each president, and organizational charts.

The 40-year history of the Mantetsu fascinates not only Japanese historians but also the general public, partly because of the image that Japanese were building a new semi-autonomous state outside of Japan. More than 1 million Japanese civilians migrated to Manchuria to begin a new life in better economic conditions. They had a western colonial lifestyle, enjoying golf clubs, large parks, and western style housing. The special express trains called “Asia” were among the fastest, best appointed trains in the world. The capital of Manchukuo [満州国], Hsinching [新京 – literally “New Capital”] (now Changchun [长春]), was built with modern urban planning with avenues and streets akin to Paris. In 1937, the Mantetsu owned 15 companies, 32 subsidiary companies, and invested in 33 more companies. They operated transport (rails, shipping, and airline), industry (steel mill, chemical, oil refinery, cement, textile, sugar), commerce (trading, retail), construction, lumber, minerals (coal and gold), electric and gas power, real estate, telecommunication and the press, and hotel chains. By its end, the Mantetsu ran or owned 71 companies with 340,000 employees, including 248,000 Chinese and Russians.

From the beginning, however, the activity of the Mantetsu and the development of Manchuria were riddled with confusing objectives. There was political infighting back in Japan among politicians, the foreign ministry and the military over its control. Relations between the Mantetsu and the Chinese in Manchuria were complicated. The Kanto-gun (Kwantung Army), at first a division of the Japanese Imperial Army, grew into a powerful presence that in the end controlled the Mantetsu.

The Mantetsu’s first president, Shinpei Goto [後藤 新平], was a charismatic leader who was instrumental in modernizing Taiwan that became a Japanese colony in 1895. In Taiwan, Goto served as deputy to Governor Gentaro Kodama [兒玉 源太郎] from 1898 to 1906. Goto was expected to apply similar skills to the Mantetsu that was established in 1906. Goto’s vision of the Mantetsu was modelled after the British East India Company’s rule in India that not only pursued economic interest for the British Empire but was involved in diplomatic manoeuvring and military intelligence.

The author argues that during the turbulent period of domestic political upheaval in Japan and the Hsinhai Revolution of 1911 overthrowing the Ching Dynasty in China, two fundamentally incompatible views about the Mantetsu emerged: The Mantetsu’s leadership believed that by succeeding in business, the Mantetsu could pave the way for peace and prosperity in the region that would be beneficial to Japan. Another view was for the government in Tokyo to take the initiative in diplomacy that would benefit the Mantetsu’s business interests. Gradually, the “national policy first” supporters began to control the Mantetsu.

The book narrates in detail the Mantetsu growth into a large-scale enterprise, its complicated relationship with the Chinese warlord, General Chang Tso-Lin [张作霖], and his assassination by the Kwantung Army [関東軍]. It delves into the rising anti-Japan movement in Manchuria, the Mantets’s participation in the establishment of Manchukuo, and deteriorating Mantetsu operations during World War II. Finally, it assesses Japan’s surrender in 1945 and its aftermath. With Manchukuo and the Japanese military collapsing, Motomiki Yamazaki [山崎元幹], the last president of the Mantetsu, negotiated with the Soviet military that occupied Manchuria in the closing days of the war. He and his senior managers sought to protect more than 1 million Japanese and to obtain their safe return to Japan.

The Soviet army continued to occupy Manchuria after the war during which time they transferred most of the hardware materials from Mantetsu plants to Russia as war bounty. The Nationalist generalissimo, Chiang Kai-shek, was fighting communists and had little control over Manchuria. When Chiang’s forces finally reached the area, they recruited 11,400 Mantetsu employees to run various plants and railways. The Chinese communists recruited 80,000 Mantetsu employees for the same reason in the areas they controlled. The last employees returned to Japan in 1948.

In summary, Kato’s book illustrates the complex history of the Mantetsu from many angles. He particularly focuses on how the concept of “national policy” that was supposed to guide the Mantetsu was the source of trouble. Different civilian and military leaders who had their own agendas interpreted national policy in different ways.

Kato makes the point that the post-war study of the Mantetsu by Japanese had an ideological premise to prove that the Mantetsu was only a tool of Japanese imperialism that inflicted damage on the Chinese. He observes that after the end of the Cold War, however, more studies have been published without those ideological twists. Memoirs and books by those who were in Manchuria or with the Mantetsu tend to be nostalgic and idealizing, and this tendency becomes more intense as they get older.

A perceptive observation by Kato is that for China, the Mantetsu is still a politically sensitive issue. The Mantetsu left behind detailed records of their activities in archives that were transferred from the Soviet military to the Chinese communists. This vast collection is preserved in the Liaoning Provincial Museum [辽宁省博物馆], but it is not open to the public. Kato read a portion of the collection by way of publications by the museum itself, several Chinese universities, and Japanese publishers.

The Northeast region, which Manchuria was also called, was instrumental as a supply base for the Peoples Liberation Army during the civil war and as a heavy industrial zone after the birth of the Peoples Republic of China (PRC) in 1949. Although the Soviets provided economic and technical assistance in the early years after PRC was established, there was no question that the region benefited from the industrial facilities and technical assistance by the Mantetsu employees who remained in China after the war.

For the Chinese, the study of this aspect is problematic. Kato explains that currently, Chinese academic works that show that the Northeast region’s heavy industry was the backbone of the revolution are rejected, particularly in light of the fall during the Cultural Revolution of Lin Piao [林彪] and Liu Shao-chi [刘少奇] whose power base was in that region. In that sense, the history of the Mantetsu still haunts today’s interpretation of that period in China.