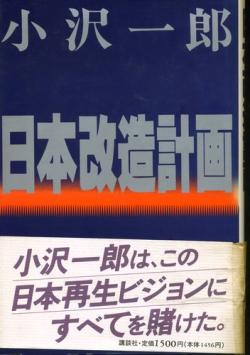 Ichiro Ozawa is a controversial figure with great political skills and strong leadership ability. He once presided over the Liberal Democratic Party (LDP) as its powerful Secretary General whose ability in raising funds was legendary. He was a protégé of late Prime Minister Kakuei Tanaka [田中 角栄], whose ambitious plans to cover Japan with highways and railways transformed regional economies but escalated the corrupt links between industry and politicians. Tanaka was later found guilty of bribery in the Lockheed scandal in which he was charged with accepting five hundred million yen from Lockheed for his role in reversing the selection of American airplanes for All Nippon Airways.

Ozawa was born in 1942 in Iwate Prefecture into a political family, his father having been a member of the Tokyo City Council, and later a member of the House of Representatives. Ozawa graduated from Keio University in 1967 and did graduate study at Nippon University. In 1969, he ran as a LDP candidate and was elected to the House of Representatives from a district in Iwate. Since then, he has been elected to the Lower House at every election since his first victory in 27 December 1969. He steadily rose in the party, serving at various times as parliamentary vice minister for the science and technology agency, ministry of construction, the parliamentary steering committee chair, then as minister of home affairs, chairman of the National Security Commission, and LDP Secretary General from 1989 to 1991.

In 1993, however, Ozawa split from LDP and with Tsutomu Hata [羽田 孜]  formed the Japan Renewal Party [新生党]. Together with other opposition parties, they succeeded in winning the majority of seats in the Lower House election, with Morihiro Hosokawa [細川 護煕] as prime minister. This coup was short lived and the LDP won back a majority in 1994. In 2003, the two opposition parties, the Democratic Party and the Liberal Party, joined forces to establish the Democratic Party of Japan [民主党]. Ozawa was elected its leader in 2006. In the summer of 2007, the Democratic Party gained the majority in the House of Councillors, a foretaste of its historic victory in the August 2009 general election for the Lower House. However, Ozawa had been forced to step down as party leader before the victory due to a funding scandal but was appointed DPJ Secretary General after the election.

After Ozawa’s book, “Reform Plans for Japan,” was published in 1993, it became a best seller. It was rare at that time for a politician to lay out specific policy proposals for reforms in political, economic, security, and social issues. It is still widely read among those who seek answers to solving problems that Japan faces today.

In domestic policies, Ozawa advocates reform in the structure of government. For example, he proposes to introduce the system of special advisors to the prime minister, making the chief cabinet secretary the senior advisor, similar to the National Security Advisor in Washington. To break down the walls between ministries, he proposes that the prime minister’s spokesperson, rather than cabinet ministers, announce major policy decisions to increase the stature of the prime minister as the face of the nation.

The power of a Japanese prime minister is limited even though he is the head of the majority party in the parliament. Apart from the cabinet, the party’s decision-making often supersedes the prime minister’s preference. To streamline the process of decision-making, Ozawa proposes to bring senior party leaders into the cabinet by giving them posts as ministers at large, following a British model. By doing so, Ozawa asserts that control on policy matters by the bureaucrats would be eliminated, breaking the tradition of politicians relying on bureaucrats during debates in parliament.

On foreign policy and security, perhaps the phrase, becoming an ordinary nation [普通の国になる], is the best known line encapsulating Ozawa’s thinking. He asserts that Japan should not neglect its responsibility in security, sharing the cost of peace and freedom. While keeping the U.S.-Japan security alliance as the basis of Japan’s foreign policy, Ozawa wants to change the mission of the Self Defence Forces from defence to participation in peacekeeping missions as a part of the United Nations collective security apparatus. He believes this is doable under the present constitution.

He allots considerable space to the UN as the vehicle to create a new world order. He appeals to the United States to use the UN and work with UN. His assumption, when this book was written in 1993 during the Clinton administration, was that the U.S. government was moving in that direction. He even proposed creating a separate Japanese military unit that could be called upon by the UN Secretary General who, according to Ozawa, has authority to order such forces to take action.

He would thus abandon the authority of the Japanese government to deploy such a force. Ozawa’s belief in the role that the UN could play, and his willingness to let the UN shape the future of the nation’s Self Defence Forces has met sharp criticism from lawmakers critical of the ability of the UN to resolve international conflicts. Ozawa to this day, however, seems to stick to his UN initiative proposal.