Confessions of a Dog 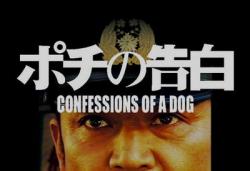 “In Japan there are two things you should never try to oppose – the Emperor and the police!”

Gen Takahashi’s Confessions of a Dog is a powerful, grim indictment of the Japanese police force based on Takahashi’s own experiences of the police and the work of his friend Yu Terasawa, a freelance journalist working in Japan who writes about police misconduct. Lasting three hours and 15 minutes it does seem a long film, but this is worth it given the level of detail, characterisation and display of police transgressions from blackmail to sexual harassment to claiming false expenses to staged drug arrests. It is set in 1999/2000 and has a grainy quality to it which lends it the feel of a documentary.

Completed in 2005, the film was only released in late 2009 and tells the story of a modest policeman by the name of Takeda, superbly played by Shun Sugata (菅田俊).  A hulking bear of a man, Takeda works at a koban, mini-roadside police station. Diffident and biddable, his meekness is recognised by the appallingly corrupt police captain Mie played by Gen Idemitsu (出光 元), who lures Takeda into joining the criminal investigation department as a detective.

Indebted to Idemitsu for this unexpected promotion and unable to turn down his superior’s commands, Takeda becomes embroiled in a murky tangle of police deals from which he cannot extricate himself and falls from grace very publicly.

Takeda continues his extraordinary evolution from moral family-oriented cop to one who abuses his authority and begins cavorting with 16-year old girls. Spiralling out of control, he dutifully accepts his final role of scapegoat as he takes the blame for homicide, embezzlement, bribery and bringing disgrace to the police.

The freelance investigative journalist Kusama, on a mission to unveil police corruption, is barred from Takeda’s trial. Armed with plenty of incriminating evidence against the police, he organises a compelling press conference at the Foreign Correspondents’ Club in Tokyo at which all is revealed. It is the Japanese public which is exposed as the unwitting victim, oblivious to police excesses and media complicity.

An utterly broken and betrayed man, Takeda lets rip at the end of the film for a full six minutes. Exhausted and dejected in a prison cell, he delivers an almost Shakespearean soliloquy damning the Japanese police force and justifying his submissiveness by explaining that “no dog can survive by disobeying his master.” The absolute contempt shown by the police as described by Takeda leaves the viewer indignant; the camera pulls away from Takeda until he is no more than a tiny speck floundering in a vast prison.